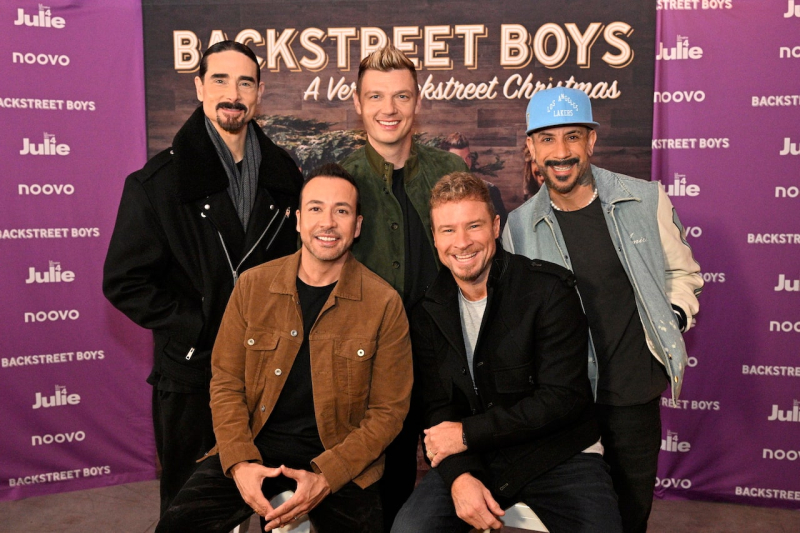 A first Christmas album in three decades of career and the evocation of an acoustic album of their greatest hits (“a surprise to come for our 30thcareer anniversary next year, who knows?” Brian hinted to the Journal): this is what fills the busy days of the five members of the Backstreet Boys. They were in Montreal today.

Ask if Quebec holds a special place in the hearts of members of the Backstreet Boys and Kevin Richardson will tell you that between a Tuesday in Detroit and a Thursday in New York, there is no was able to do otherwise than jump at the chance to come and say hello, even in the wind.

“Quebec is a very special place for us, explained the 51-year-old singer to Journal. It was the first place in North America that gave love to the Backstreet Boys and we we have never forgotten it.”

“We have many beautiful memories here,” added Brian Littrell, his eyes shining.

It must be said that several collaborators, with whom the group has worked since its inception, are in Montreal.

Brian, Kevin, A.J., Nick and Howie are currently promoting their first Christmas album, in almost 30 years of career. A project that the group that has accumulated number 1 songs over time has been wanting to complete for quite a while now and that will have asked for… a forced break that came with a global pandemic to give them the time they need to s 'y atteler.

“We recorded the album A Very Backstreet Christmasin July and August in L.A, laughs Brian. We put up Christmas decorations, the fireplace on the TV and a Christmas tree in the studio, but we were in shorts and sandals! But hey, you try to be in the moment, to create this atmosphere and this emotion specific to Christmas and you go for it. Then, now that we are all fathers, our Christmases have a new meaning. We wanted it to be BSB quality, because we want this album to live forever.”

This album made by Tommy Brown, is composed of 15 tracks, including three original songs, bringing to five the number of original Christmas songs recorded by the group in career; with Christmas Time in 1996 and It's Christmas Time Againin 2012.

How did the members agree on which Christmas classics would go on the album? “We all created our wishlist, tallied up the points for each song, and the most popular won,” says Kevin, who insisted that the songsI'll be home for Christmas and Holy Night are part of the final selection.

For Brian, Same Old Lang Syne and < em>Silent Night were some of his favorite Christmas songs. He is also particularly fond of Christmas in New York, “because it's a wonderful original piece and an instant classic”.

For the record, the song Christmas in New York had been shelved by none other than singer Tony Bennett for a future Christmas album. “But when I heard it, I immediately said I was going to play it for the guys and that’s it,” says Kevin.

The band, which has amassed worldwide sales of more than 130 million albums, is already aiming to tour this Christmas album, during the holiday season, in the next few years. “We would like to deliver these songs live, in small theaters and intimate venues in New York, Toronto, Quebec and Montreal.”

The pride of still being there

The boys band which continues its DNA World Tour and which is preparing to celebrate its 30 years of career next year, has something to be proud of to be always followed and loved by his many and faithful admirers.

What are great friends most proud of? “To live this adventure together, answers Brian. 30 years ago, we wanted to have this career and we said that we were going to stay and live all this together and that we would be proud together of our accomplishments. That's what we did! I am also proud of the relationship we have now, which is even stronger than before. To have made music that we are proud of and that we still enjoy as well.”

While they don't deny having had a few quarrels over the years (“Of course, we're family!” Kevin says), they still say they enjoy working and growing together.

“I think we're still here, because we care about people,” Kevin explains, adding that he still feels like a young man of 25 when he finds himself on stage. When we do something, we put our whole heart and soul into it. If you don't work for what you have, I don't think you deserve to be successful. That's what I've always been taught. If you put in your heart and all your soul, that's what you're going to reap.”