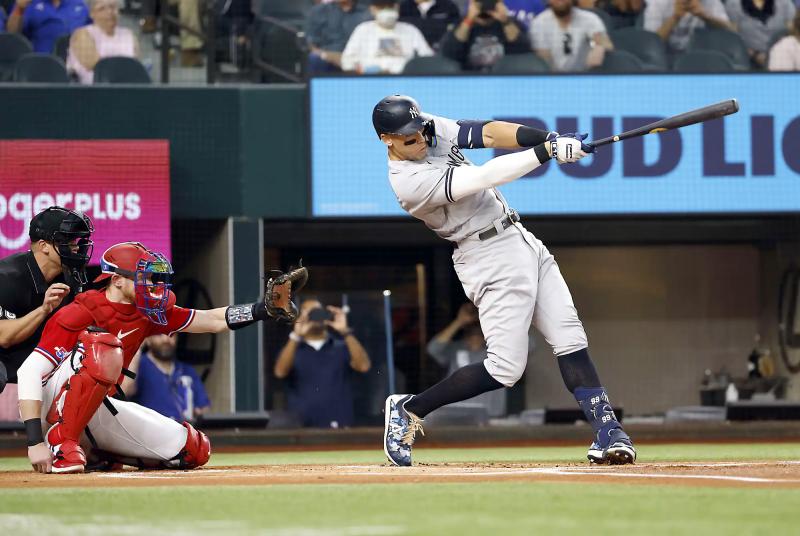 Aaron Judge will have gotten there in his penultimate game of the season. The power hitter of the New York Yankees holds since last night the record for the most home runs in a season in the American League with 62.

True to form, Judge rounded the bases calmly. No fists in the air or any other gesture that could offend the opponent. He pointed his index finger straight at the sky as he crossed home plate before a rival crowd in Arlington, Texas, who gave him a standing ovation.

Remember where you were when #AaronJudge made history. 6️⃣2️⃣ #AllRise pic.twitter.com/w4kbDJf5ZC

Judge is a great ambassador for his sport. He is the type of athlete any team would love to have in their roster. He is reminiscent of Cal Ripken Jr., holder of the longest streak of consecutive games played with 2,632 games.

He devotes a lot of time to amateurs. Before the games, he signs multitudes of autographs. He even happens to chat with spectators during the game. He is very simple.

We never see him playing the star.

L influence of his mother

It's a trait instilled in him by his adoptive mother. Born of a mixed union, Judge was adopted by Patti and Wayne Judge, retired physical education teachers, the day after his birth. He grew up in Linden, California, a town about 150 kilometers east of San Francisco.

Judge is grateful to his mother for teaching him the values ​​of life.

“Without her, I would never have played for the New York Yankees, he confided in an interview published on the MLB website in 2017.

“She taught me the difference between right and wrong and how to treat people. She showed me that to go higher, you have to put in extra effort.

“She is the one who shaped the person I am today.”

Yankees fans know they have a jewel in their hands and they return it well. They supported him throughout his hunt for the record of Roger Maris, who became the first MLB player to hit more than 60 homers, in 1961.

Most Yankees fans— would have preferred the legendary Bambino's recordis surpassed by the popular Mickey Mantle, who had the face of a movie actor. Maris, on the other hand, was a reserved guy from the American Midwest, who felt out of his element in the Big Apple.

What's more, baseball commissioner Ford Frick had decreed that Maris' record is starred because he pulled off the feat in a schedule that included 162 games compared to Ruth's 154.

Comedian and director Billy Crystal, big fan of the Yankees in front of the eternal, made an excellent film on this story entitled 61*.

The asterisk was finally removed in 1991, but Maris had not been around since 1985.

Her son Roger believes, for his part, that Judge's record should apply to the entire MLB and not just to the American League.

“The record he is about to set has great significance, not just for me but for a lot of people, he said over the past few days,

“He is clean, he's a Yankees and he plays baseball the right way. I think he should be recognized as the most single-season homer in baseball history.”

The mark of 73, set by Barry Bonds in 2001, is strongly disputed. Everyone knows that Bonds used performance-enhancing products. The same goes for Sammy Sosa.

Only Mark McGwire, who had seasons of 70 and 65 home runs, has admitted to using illicit substances.

Nowadays, the tests for detecting illicit products are stricter. Alex Rodriguez, who ranks fifth in history with 696 long runs, was suspended the entire 2014 season for doping.

And he was a member of the Yankees…

Judge is an exceptional athlete. He is the 21st century counterpart of Bob Jackson. With an imposing stature of 6'7″ and 282 lbs, he could have had a career in football or basketball.

He was a star on the Linden High School football team. Playing as a tight end, he set two school records for rushing yards (969 yards) and touchdowns (17) in his final season.

His performance earned him the offers from UCLA, Stanford and Notre Dame universities, three of the highest rated institutions in the United States for the quality of their academic and athletic programs.

In basketball, he averaged 18 points and 13 rebounds per game as a center in his senior year in high school.

How much will he cost?

Baseball being his preference, he enrolled at Fresno State University.

At age 20, he was selected in the 31st round of the draft by the Oakland Athletics . But as is often the case in baseball, Judge didn't sign a contract right away.

In 2013, the Yankees drafted him 32nd overall. Three years later, he made his debut with the big club.

At 30, he is not only the king of home runs, but he could win the American League batting triple crown.

To say that he will be eligible for full autonomy at the end of the campaign.

He will be expensive!

Most long balls in a campaign by a Yankees player

Most Home Runs in a Season in MLB