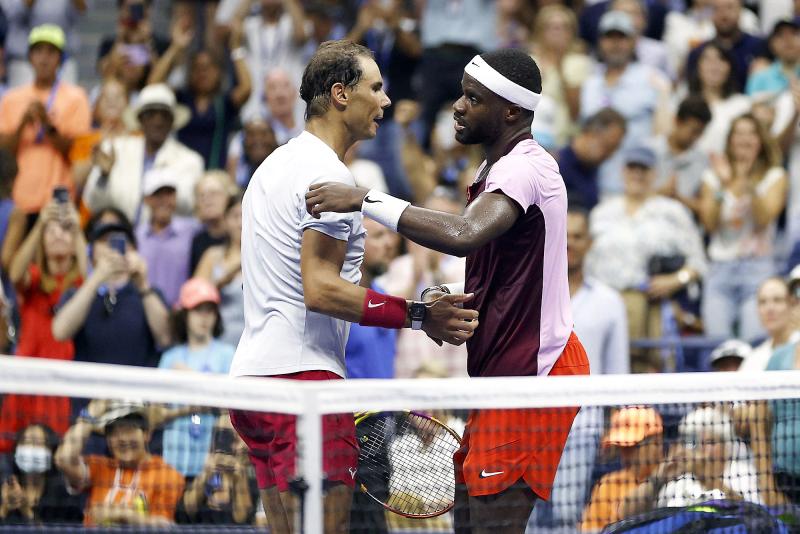 Does Frances Tiafoe's victory over Rafael Nadal on Monday at the United States Open mark the start of an ATP revolution? For the first time since 2004, no member of the infamous “Three-Headed Monster”, commonly known as the Big Three, are quarter-finals of a major tournament.

Actually, the stat is not completely accurate. Two years ago, neither Nadal, nor Roger Federer, nor Novak Djokovic had participated in the quarterfinals of the US Open.

But this season was special, marked by COVID-19 . Thus, the Spaniard and the Swiss skipped New York.

The Serb was eliminated in the round of 16. However, he did not lose the match on a regular basis. The world number 1 at the time was disqualified for unintentionally hitting a line judge with a hit ball in a gesture of frustration.

At Roland-Garros, there a long time

Before that, the last time the three most dominant players of the past two decades had all been absent from the quarterfinals was 18 years ago at Roland-Garros. Federer was only 22 years old and he was beginning to reign over men's tennis.

He had been ousted by Gustavo Kuerten. A surprising defeat, of course: the Swiss was already world number 1 and the Brazilian was ranked 30th.

Nadal and Djokovic were not French Opens that year. The first, then 18 years old, suffered an ankle injury. The second was only 17 years old and was ranked 331st in the world.

Of course, this US Open is not quite normal either. Nadal was the only member of the Big Three, winner of 63 major titles since 2003, present in New York.

And at 36 years, despite two  Grand Slams raised this year, in Australia and France, “Rafa” is not at the top of its game at the moment.

It was he himself who recognized this on Monday, after his loss against the American Tiafoe, 24 years old and 26th in the world.

“ Often, tennis is a sport of positioning. If you're not well positioned, you have to be really fast and really young, the Spaniard said smiling at a press conference. I am no longer at this point in my career. »

Without Djokovic and Federer

Djokovic, champion at Wimbledon in July, for his part was forced to skip the last round of the Grand Slam of the season. Not vaccinated against COVID-19, he is prohibited from entering the United States.

Federer is injured in his right knee. At 41, the legend hasn't played for over a year, but is expected to return to competition this fall.

But a sign that the revolution is not quite underway, Nadal, with his 38-5 record this season and his four titles, could regain the world No. 1 on Monday.

For that , it will be necessary that neither his young compatriot Carlos Alcaraz nor the Norwegian Casper Ruud reach the final in Flushing Meadows on Sunday.

If he regains the number 1 spot in the ATP , more than two years after his last appearance at the top of the charts, Nadal would become the second oldest player in history to occupy this position, behind a certain… Federer, in 2018.

Defeats in the quarter-finals: 8 (7 at the Australian Open, 1 at the US Open)

Defeats in the semi-finals: 7 (1 at the Australian Open, 1 at Roland-Garros, 2 at Wimbledon, 3 at the US Open)

Defeats in the quarter-finals: 10 (3 at the Australian Open, 5 at Roland-Garros, 2 at Wimbledon)

Apart from this year 2020 marked by the pandemic, it has been 18 years since neither Novak Djokovic, nor Rafael Nadal, nor Roger Federer have reached the quarter-finals of a Grand Slam tournament.

In almost two decades, the world has changed a lot:

Mark Zuckerberg launches the first version of Facebook, which at the time was a social network for Harvard University students.

The Haitian President < strong>Jean-Bertrand Aristide is overthrown in a coup.

Members of the terrorist group Al-Qaedabomb the metro in Madrid, the Spanish capital, killing 192 people.

Stephen Harper is named leader of the Conservative Party of Canada.

At the wheel of his Ferrari, the German driver Michael Schumacherwins the last of his seven Formula 1 World Championship titles.

An earthquake in the Indian Ocean causes a powerful tsunami that killed more than 200,000 people on the coasts of Thailand, India and Sri Lanka, in particular.

The Big 12 rather than the Big Three

A surprising Rafael Nadal heartthrob on Monday, Frances Tiafoe doesn't believe the next generation will see a trio as dominant as the one that has ruled tennis for the past 20 years.

< p>” I think it will be a Big 12 ,” noted the 24-year-old American at a press conference, shortly after eliminating the Spaniard in the round of 16, Monday, at the US Open.

“There are several guys who play excellent tennis, added the 26th player in the world. I believe it is good. Of course, there is likely to be a player who will cement his place at the top. It still happens right now. We'll see who that person will be. ”

With Nadal out, Novak Djokovic and Roger Federer out, the draw is wide open in New York.

Especially since the world number one, the Russian Daniil Medvedev, was ousted by the Australian Nick Kyrgios on Sunday evening, also in the round of 16.

As for the second player in the ATP ranking, the German Alexander Zverev, he could not make the trip to Flushing Meadows, because of the severe ankle sprain he suffered at Roland-Garros.

“I think the fact that Nick [Kyrgios] plays great tennis is great for our game. You see him fill stadiums, whether it's singles or doubles, Tiafoe said. [Carlos] Alcaraz has a great personality. There's [Jannik] Sinner. Me. People look alike behind me.

But if he thinks it's “cool to witness the beginning of a new era”, the American spectacular is not convinced provided that the previous one, that of Nadal, Djokovic and Federer, is over.

Asked by a journalist, who noted that one day, the “monster with three heads” was about to retire, Tiafoe simply replied, “We've been saying that for how many years already?”.