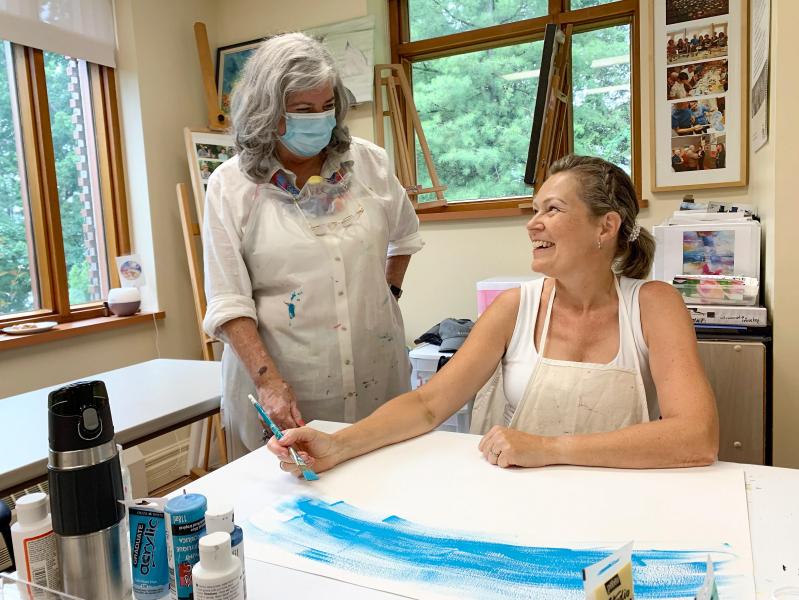 Arrived in a palliative care center by chance, Marcia Lorenzato had no idea that she would one day become one of the pillars of the establishment . Fifteen years later, it has allowed hundreds of patients to thrive before they die.

“Marcia works a bit in the shadows, not realizing the impact her work brings to people, while carrying on her shoulders one of the strong core of the center. And she doesn't count her time,” says Danielle Leblanc, nurse clinician at Center Bonenfant-Dionne.

Just wanting to “take a break” after completing her doctorate, Marcia Lorenzato went to the establishment located in the Maison Michel-Sarrazin in Quebec City with the intention of offering works there for International Women's Day in 2007.

As luck would have it, the Center Bonenfant-Dionne, which aims to improve the well-being of people with cancer in the palliative phase, is looking for volunteers to give artistic expression workshops.

< p>“Finally, I stuck! laughs the 62-year-old woman who has since held an official position within the organization. “I fell in love with the humanist aspect of the work. »

Death walks in the shadow of each of the “guests” who cross the door of the room of the accompanying person through art. Yet they all come out with bright eyes, light hearts and relaxed shoulders.

“It allows us to bring out all our emotions and channel them into creating. When I make art with Marcia, time stands still. I'm fine, here and now,” says Kathy Gilbert, who takes part in the workshops, with emotion.

For Ms. Lorenzato, achievement is a basic human need. And even if time is limited for his guests, it is important that everyone is able to “close the loop” by being at peace with themselves.

“The announcement of a impending death leads to a huge feeling of helplessness. The artistic process allows them to journey and integrate this concept, without however forgetting it. It alleviates their ailments,” explains the 60-year-old from Brazil.

We see her with another user, Isabelle Buffard.

After fifteen years, Marcia Lorenzato says she has been touched in some way by each of the people who have crossed the door of her studio, whether she has been with them for two weeks or two years.

It is not uncommon for several of them to have the idea of ​​asking for help doctor to die because of their inner pain, before changing their minds after a few encounters. There is no better pay, believes the accompanying person.

“For me, it is a privilege to be able to make a change in people’s lives. I feel like they take care of me, as much as I take care of them,” she concludes.