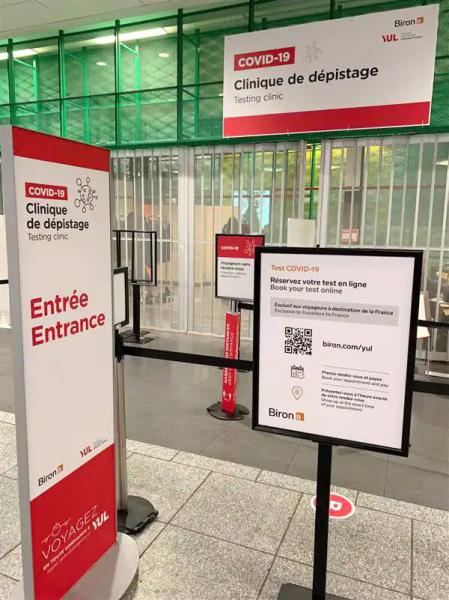 A Quebec company mandated by Ottawa to carry out the mandatory COVID tests at Montreal-Trudeau airport has secretly used travelers' emails to boost a marketing campaign in the midst of a health crisis.

“Individuals forced to undergo COVID-19 testing at borders do not expect that the personal information they provide to the organizations that perform these tests will then be used for promotional purposes,” said decided the Office of the Privacy Commissioner of Canada (OPC), yesterday.

The watchdog had a flea in his ear after a complaint from a shocked traveler to receive advertising from Biron Groupe Santé (Biron) by email a few days after having had the result of his COVID-19 test.< /p>

According to the OPC, Biron was the only firm to offer this type of service at the airport and travelers therefore had no choice but to do so with the business to comply with the law.

“In this context, these travelers did not expect their personal information to be used for purposes other than the mandatory screening test,” we insist.

Today, the case is “considered settled”. Biron swears that he deleted the emails of 147,000 travelers who were not already his customers.

“Given that Biron has ceased the problematic practice and taken corrective measures and that the complainant is satisfied with the measures taken by Biron in response to his complaint, the latter has been deemed settled during the investigation”, concludes the Office of the Commissioner at the protection of privacy.

For Michel Séguin, professor and expert in ethics at the University of Quebec in Montreal ( UQAM), firms like Biron have a duty to respect data owners.

“The company cannot use the information obtained for purposes other than those intended”, he -it summary.

“Biron erred. It should have not used them and destroyed the information within a reasonable time. She failed in her duty,” he added.

Its Head of Communications and Public Relations, Annie Gauthier, preferred to respond to the Journal with a short written statement.

“I would tell you that there is nothing more to add to what the Office of the Commissioner's announcement relates,” she said, sending her response by email.

▶The Office of the Privacy Commissioner of Canada wishes that the federal government and parliament are amending the law so that it can impose fines on offending companies.