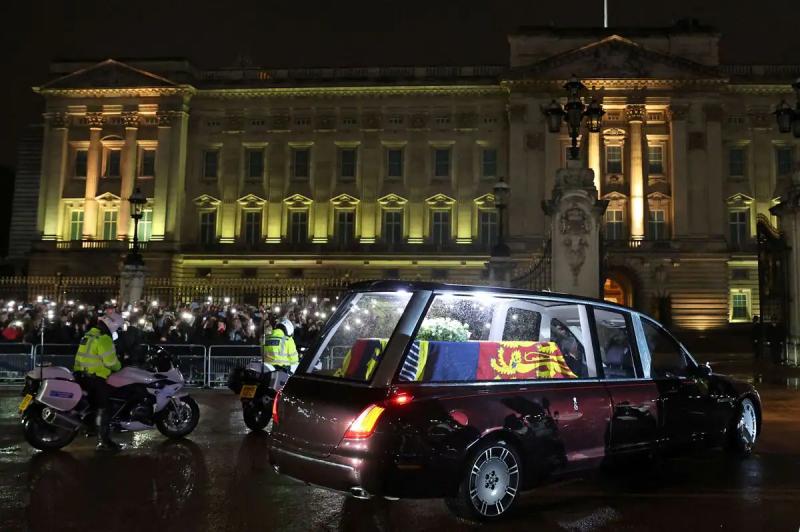 Hundreds of thousands of Britons are expected in London from Wednesday to greet Elizabeth II one last time, their beloved monarch back in London almost a week after her death in Scotland.

The coffin of the Queen, who died Thursday at the age of 96, was found in the British capital on Tuesday evening. After a night at Buckingham Palace, the body will go to Westminster Hall, the oldest chamber in the British Parliament, after a solemn procession in central London.

For almost five days, from Wednesday 5:00 p.m. (4:00 p.m. GMT) until Monday 6:30 a.m., the day of the national funeral, the British will be able to come and pay a last tribute as closely as possible to their sovereign, unanimously hailed for her total devotion for more than 70 years of reigns.

Hundreds of thousands of people are expected at Westminster Hall, open for the occasion 24 hours a day. But it will take patience, with long queues that could s 'stretch for miles.

The coffin of Elizabeth II has already been exposed from Monday evening to Tuesday in the Saint Gilles Cathedral in Edinburgh. Sometimes moved to tears, some 33,000 people waited for hours to go and gather briefly in front of the coffin, covered with the royal flag and the crown.

Rock of stability in the storm, sometimes political, social or health during Covid-19, the Queen has been a reassuring image for millions of Britons during her decades on the throne.

On Tuesday evening, Princess Anne, only daughter of Elizabeth II, had accompanied her coffin on the plane which took it from Edinburgh to London. New King Charles III, Elizabeth's eldest son, was on hand to welcome the remains upon his arrival at Buckingham Palace, after spending the day in Northern Ireland, a delicate step in his accession to the throne.

Elizabeth II had played a major role in reconciliation in the province with a bloody past. But nearly a quarter of a century after a fragile peace returned between Republicans, mostly Catholics, and Unionists, mostly Protestants, tensions have been reignited by Brexit.

“With a shining example ahead me, and with the help of God, I take up my new duties determined to seek the well-being of all the inhabitants of Northern Ireland, ”said the monarch in the local Parliament, at a standstill for months. /p>

After London, Edinburgh and Belfast, Charles III will travel to Cardiff in Wales on Friday, the last leg of his tour of the four British nations. The king's rating has risen dramatically since his accession to the throne, according to a YouGov poll released on Tuesday. Three out of five people think he will make a good king, compared to just over 30% a few months ago.

Tensions in Northern Ireland, independence tendencies in Scotland, galloping inflation: Charles III, who at 73 is older than any British sovereign at the time of their accession to the throne, takes office at a critical moment.

The country, in the grip of a serious social and political crisis, has had a new Prime Minister for a few days, Liz Truss, whom Queen Elizabeth II had received at her Scottish residence in Balmoral to ask her to form a government two days before s turn off.

But the time is for the moment for meditation, the country preparing for the immense logistical and security challenge of the coming days.

After prayers at the Palace in the presence of the King, Queen Consort and Royal Family, the coffin will leave Buckingham Palace at 1.22pm GMT on Wednesday for a procession through central London, laid on a gun carriage, to the Palace of Westminster.

The King and members of the Royal Family will join in, as Big Ben rings and cannons are fired from Hyde Park.

Full hotels, disrupted transport, crowded pubs… The British capital was preparing feverishly on Tuesday for the home stretch before the funeral of the century.

While the queue risks being uninterrupted to see the coffin, the government has already warned of “draconian restrictions”, worthy of airports, to manage the historic crowds at the Palace of Westminster.

If the authorities refuse to give a figure, the press evokes some 750 000 people ready to brave a wait that could be counted in dozens of hours. In 2002, around 200,000 gathered in front of the coffin of the Queen Mother Elizabeth, presented to the public for three days before her funeral.

The crowd should be even greater upstream of the “funeral of the century”, the first national funeral since 1965 – those of Winston Churchill -, which will take place on Monday, September 19 in the presence of some 500 foreign dignitaries and many crowned heads.

Russia, the Belarus, Burma and North Korea, however, were not invited.