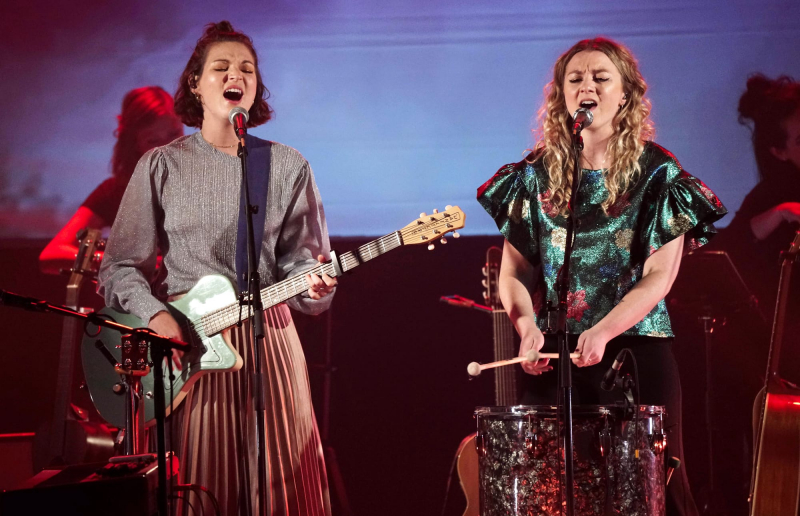 Exactly ten years after winning the Les Francouvertes competition at Club Soda – and releasing their first record The weight of confetti< strong> –, The Boulay sisters return with a fourth album entitled Escape the Night. This new opus allowed the two artists to have fun. By using pop rhythms to reveal frank words, without metaphorical artifice, they assume their plurality and embrace a new freedom to say things as they wish.

“It is not for nothing that we do this in life, music lives in us, it is part of us; it's healthy, it's beautiful and that's what we hung on to,” explains Stéphanie Boulay gently.

Four years after the release of their last album, < em>The Death of the Stars(2019), and two years after announcing they needed to take a break in September 2020, Gaspésie's best-known singer-songwriter sisters are back with Échapper à la nuit.&nbsp ;

This album filled with light offers us to believe that the difficult times of recent years (waves of denunciations following the #metoo movement, loss of their manager and their record company, the music world revealing its dark sides, legal process with their old record company) have been left behind, even transformed into reflective moments forcing them to go back to basics.

“This new album represents as much an opening towards the future as one point, continues Stephanie, 35. We continue, there is still beauty to seek. Then, a period, because we arrive at something which is of the order of the end of a sentence. Everything is possible. »

“We have mourned and now we are happier than ever, adds Mélanie, the 32-year-old “little sister”. We came back because we had the inspiration. And then we had the privilege of choosing every person we wanted to work with, including director Connor Seidel, who is a real genius. »

To achieve this double project – a return to music and a new album to present to the world –, the duo asked themselves: what to look at to see enough positive in their job and above all, want to come back?

“That's when I said to myself: what I love is writing songs first and foremost, says Stéphanie.— This is in my life and makes me feel good. I had my answer. »

It is under their new record label, Simone Records, that the duo will present on October 21 the fruit of their reflections of the last few years. All in a new and refreshing style: more frontal texts, less hidden behind poetry and metaphors, and totally assumed pop music, more rhythmic and more made up than anything the pair had offered before. < /p>

“Perhaps pop music waters down these remarks which are a little 'in your face',” says Mélanie.

“What is certain is that that we all aspire to enter into people's lives, continues Stéphanie. When you write a song, you wonder if it will carve out a place in people's lives. »

“In life, we make music so that people feel understood,” adds Mélanie.

The song Surtout, especially is about the love relationship – hatred of musicians with social networks (“I need likes so much!”, confides Stéphanie.) The piece You kept silence > addresses the difficult theme of the culture of silence when a denunciation occurs and we hear “everyone knew. As for the song As if, she looks back on a childhood and a life riddled with flashes of violence.

“The feeling I have after writing a song and after recording it— in the studio, d to have gone from nothing to that and be proud of what we have built together; this for me is the best feeling, it's magic! confides Mélanie.

“There are people who give birth, who get married, who experience their heartache or their bereavement on our tunes, adds Stéphanie. When we think that mothers make our children listen to our songs, it touches us and gives meaning to everything we do.”

The Boulay sisters' new album, Escape the Night, will be launched on October 21st. A few dates for their tour across Quebec in 2023 have already been announced, including Longueuil on February 23, Brossard on April 20, Quebec City on October 13 and Trois-Rivières on October 21, 2023. For more information on the sale tickets: lessoeursboulay.com