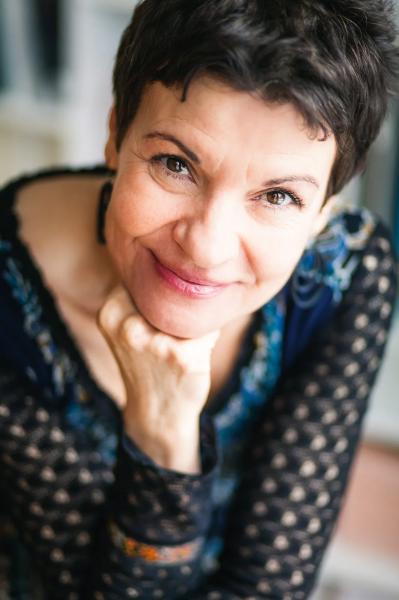 Award-winning writer, finalist of numerous prestigious awards for her previous novels, Montrealer Françoise de Luca offers this summer La fille à la tresse, a novel based on a true story that depicts the Second World War presented from the point of view of women. The moving story of Solange and Liliane reminds us that wearing a hat was at that time, in France, a sign of elegance, but also a strong symbol of resistance.

At the end of the 1930s, Liliane and Solange live a laughing friendship. They like to dance, have fun and leaf through world magazines. Solange sometimes helps her parents, who are Polish Jews, to sell their hats in the markets.

In contact with her friend, Liliane, a disconsolate young girl from an unstimulating background, discovers a whole world of freedom, love and respect.

When war breaks out, Solange is in solidarity with her friend and joins the Resistance in her own way: by organizing the silent protest of elegant women at a time that rather advocates the natural and the stay-at-home mother.

During this period, Solange and Liliane follow paths that sometimes cross, sometimes diverge, but which always contribute to consolidating their friendship, even through memory.

La mother of a friend

This moving novel, where friendship, respect, dignity and memory are in the spotlight, is inspired by a true story. Françoise de Luca, who grew up in France and has lived in Montreal for a long time, learned about it from one of her friends.

“It was his mother who lived this story, she explains, in an interview. She's a friend I've known for a long time and her mother too and they had never talked about it. “

The testimony surfaced during a college project on the history of the city of Châlons-en-Champagne.

“The subject, it was the fate of a young Jewish girl during the war. They started to do research on Solange and that's how this lady told her daughter about it, who told me about it, and immediately I knew that I would write about it. It was too interesting and it also ties in with what I like to write. »

The subject of friendship interested him enormously, but also that of the Resistance.

“It is an unknown aspect of the Occupation. These young women make hats and it was a form of resistance. The women dressed up and tried to remain pretty, to resist. »

Françoise de Luca adds that the hats were very badly seen by the Occupiers, who saw it as a provocation.

“It was quite dangerous. This side of the story has never been told.

The writer also wanted to pay tribute to all these women who were part of the Resistance, and about whom we do not talk much. Research and documentation were not easy.

“First there were the interviews with Liliane, and then I read a lot myself so that my characters could move through this complicated period. It was not always easy because it is a tragic time. Liliane turned 98 in June and still remembers it very well. It's still wonderful. »

A duty of memory

“It was kind of what I wanted to do too. The character of Solange touched me a lot. I wanted to restore this life, this friendship, everything they did together. This Resistance.

“It must be said that there is hardly anyone left. The last Resistance fighters, the last deportees, die. There won't be anyone in a few years. I felt it was urgent to write this story. »

♦ Françoise de Luca is the author of three other novels, including Pascale (republished under the title Reine), finalist for the Prix Anne-Hébert and the Prix des libraires, and Sèna, finalist for the Governor General's Literary Awards.

« And then it's summer. The summer of 1939. The holidays. In July, I'm going to spend part of it with my aunt in Thierville-sur-Meuse and I'm traveling with Solange and her parents who are going to sell their hats at the Verdun market. The first days of July were cool, but that morning it was extremely mild. The air seems transparent. We are all very happy when we get into the Citroën. »