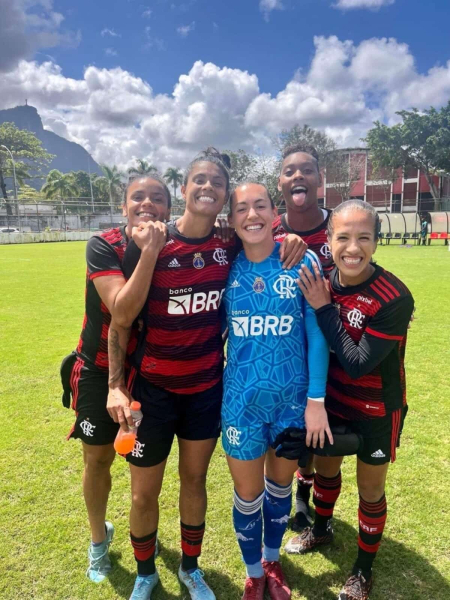 The whole world lost one of its great sports idols, the late Pelé, on Thursday. If the pain is great internationally, that felt by the inhabitants of Brazil is all the more so, and Quebecer Kelly Chiavaro has the opportunity to witness this mourning from the inside.&nbsp ;

The goalkeeper from Saint-Eustache is based in one of the country's metropolises, Rio de Janeiro, where she plays with the Flamengo club. It is only a few hundred kilometers from Sao Paulo, where the soccer icon died at the age of 82, but especially from Santos, the place where Pelé built his legend.&nbsp ;

“Even in Rio, it really shows. They lit the statue of Christ the Redeemer in yellow and green, the colors of Brazil. Exactly, the statue, I see it from my house, it's right next to it. They also illuminated the Maracana stadium in gold to pay tribute to Pelé,” Chiavaro described in an interview on Friday.

The 26-year-old is on a holiday break until January 3, but the death of the king of football has thrown everyone's holidays into turmoil. Although she has not seen her teammates, Chiavaro knows they are upset.

“People are in the street, they have made paintings of Pelé on the walls, she mentioned. They are really expressive with art. It's graffiti, but it's art. […] They painted the streets too. People are very affected.”

“People knew he was in the hospital, but they thought he wasn't going to die, he was going to live forever. When we found out he died, so many people ran to the [Albert-Einstein] hospital from their homes because they didn't want to believe him.”

In Brazil, futebol is more than a sport. Chiavaro was able to see it at the beginning of the month when the “Seleçao” was eliminated from the World Cup. For the inhabitants of the country, it was “the end of the world”.

This feeling is increased tenfold with the loss of Pelé, a man who shaped modern soccer for three decades and who spent most of his career in Brazil.

“I don't think people realize how is life in brazil. It's not an easy life. When they look at their idol, that's it for them. It gives them so much motivation, inspiration. From the outside, you might think he was just a soccer legend, but in Brazil, you understand that he had more influence,” explained the professional athlete.

Tributes will be numerous across the country in the coming days, weeks and months. Chiavaro has a special relationship with the city of Santos, since his girlfriend, Argentine striker Sole Jaimes, is a former black and white player.

“I spend all my weekends in leave at Santos because my girlfriend played there, said the Quebecer. She's a bit of a women's soccer legend in Santos and she played there for a long time. […] For her, it's really important to return to Santos the day Pelé's body is deposited in the center of the field. We'll try to get there.”

Kelly Chiavaro is getting better and better acclimatized to her new environment, she who joined the Regatas do Flamengo during the summer from Naples , in Italy. More than anywhere else, women's soccer is put forward in Brazil, and it's a bit thanks to Pelé, who passed on her passion to an entire people.