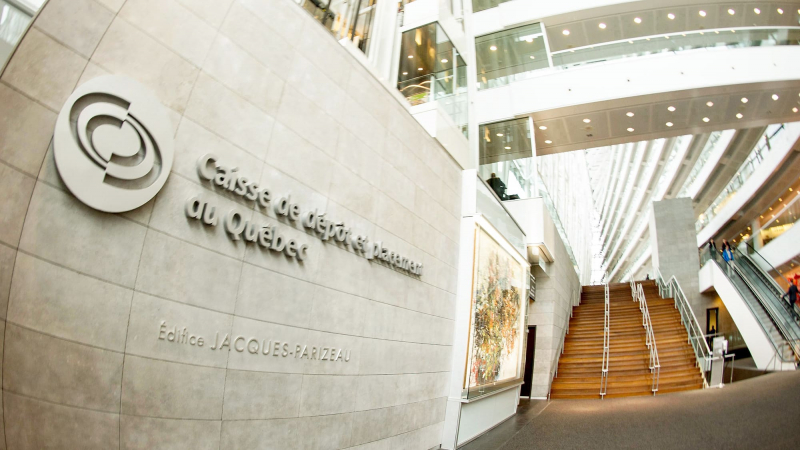 The Caisse de dépôt spent $17.1 million on land that it largely did not need, located along the route of the Réseau express métropolitain (REM), before reselling it 3 years later for a quarter of the price.

Taken with the need to deliver the REM in a hurry and the obligation to carry out expropriations, the Caisse seems to have made a very bad deal during a transaction along the branch of the REM which goes to the northwest of the metropolis.

Our Bureau of Investigation found that in January 2019, the Caisse acquired land located in the Saint-Laurent borough for $17.1 million.

We are therefore talking about $12.6 million less, and this without taking into account that the value of land has increased by nearly 30% in this sector during the three-year interval.

“At this price there, I would have taken it back immediately and I would have made my office there,” says the president of Dex Clothing, Jacky Alloul, who was expropriated from this warehouse in which he says he put “a lot of money”.

The March 2022 deal now looks all the more ill-advised as the much smaller neighboring warehouse is currently up for sale for $12.7M.

Contacted by our Bureau of Investigation, CDPQ-Infra, the Caisse subsidiary that manages the REM, admitted that it did not need the of the land when she made the $17.1 million transaction in 2019.

She wanted a small strip of land along the railway line, but had to buy the building in full, because the owner targeted by the notice of expropriation felt that parting with a small part of his building would harm his business too much.

“I would have liked to stay. But they took a 5,000 sq. ft. in the back, so I could no longer operate with the size of the company I have,” explains Jacky Alloul.

The Caisse did not contest this request and took out his checkbook, thus avoiding legal delays.

“The settlement of this case made it possible to free up the land within the time necessary to carry out the REM work,” explains REM spokesperson Emmanuelle Rouillard-Moreau. The amount paid is based on a 2018 real estate value and includes all damages governed by the Expropriation Act. »

$12.6 million swallowed up in four stages

2. Since the company says it cannot operate without its entire building, the Caisse expropriates the entire land for $17.1 million, including the vast warehouse in this photo (yellow and red areas).

3. The Caisse also wants to obtain a small portion of land belonging to Max Latifi, which is used to store fences (area in green).

4. Max Latifi disputes the amount offered. The Caisse sells her almost all of the land she bought in stage 2 for $4.5 million (area in yellow), in exchange for the abandonment of Latifi's challenge.

The lucky winner of the transaction in which the Caisse lost big is none other than the uncle of Canadian Formula 1 driver Nicolas Latifi.

Placements Mecyva, owned by Max Latifi, was able to buy the building for $4.5 million.

Owner of the neighboring land, Mecyva was in position of strength against the Caisse, which wanted to expropriate it from 2017.

While the Caisse offered $490,576 for part of its land used for storage, Mecyva instead claimed nearly $3.8 million in damages.

In 2018, before the Administrative Tribunal of Quebec , Mr. Latifi argued that the expropriation was detrimental to the expansion project of another of his businesses, Fontaine Santé, located right next door.

The Caisse settled out of court rather than go before a judge and thus sold for $4.5 million the warehouse that it had just expropriated for $17.1 million, in exchange for the abandonment of its claim by Mecyva.

The latter also received just over $400,000 in compensation.

“We agreed to this agreement given that the expropriation was both imposed and unavoidable, even if we opposed it and that 'it caused us significant inconvenience,' said Mecyva spokesperson Jean-Maurice Duddin.

If the sale was made in early 2022, the price was set three years ago, defends the Caisse, supporting valuation report.

“The amount of the sale was based on the market value of the building as of 2019. The value of the land between 2019 and today has increased considerably,” explains REM spokesperson Emmanuelle Rouillard-Moreau.&nbsp ;

Three years after the expropriation, Fontaine Santé has not expanded its factory, the building still being occupied by a fencing company, formerly owned by Max Latifi.

“The notice of expropriation made any expansion impossible,” explains Mr. Duddin. Fontaine Santé had to acquire another building on the island of Montreal to house part of its operations.

♦ In 2021, Mr. Latifi sold the majority of shares in Fontaine Santé to a US private equity fund.

You've got the scoop on us to transmit?