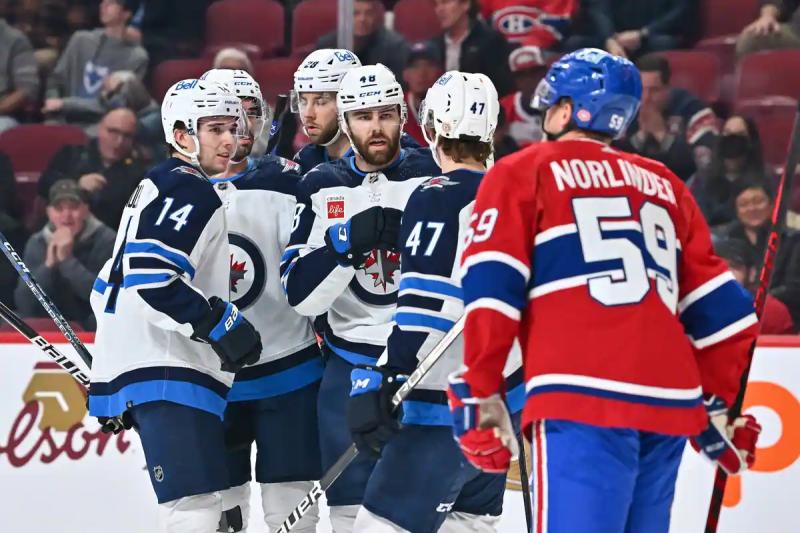 The Winnipeg Jets came to tarnish the good atmosphere at the Bell Center by scoring two late goals to save themselves with a 4-3 win over the Montreal Canadiens in the preseason game on Thursday night.

Goalkeeper Cayden Primeau didn't see many pucks in the third period – only one in the first 15 minutes of the engagement – and seemed surprised by the attacks of the Jets, when the CH led 3 to 2.

At four-on-four, Brad Lambert tied the game with 3:29 left in the kickoff, then Nate Schmidt flicked the lantern with just 18 seconds left when his shot from the blue line deflected on the stick of Evgenii Dadonov.

The Canadian had shown great things after being dominated for the first 40 minutes. The Habs' power play made its mark at the right time. Kyle Capobianco received a double minor penalty for a stick carried too high, and Brendan Gallagher, in his office in front of the net, made it 2-2. Moments later, still with an extra man, Cole Caufield hit the mark.

The Jets took control of the game by scoring twice in the first two periods. Evan Polei beat Jake Allen, who made 10 saves, then Primeau caved in to Cole Maier minutes after stepping onto the rink.

There are still some positives despite this third loss in as many games for Montreal. The good progress of Kaiden Guhle has been talking about since the start of training camp. The defender that CH drafted in the first round in 2020 seemed light on his skates during the game, so much so that he completely surprised the defense and goalkeeper David Rittich to open the scoring in the first period.

Kirby Dach collected a first point with his new team in this preseason calendar and Christian Dvorak amassed two assists.

Martin St-Louis' men will travel to Ottawa on Saturday to dispute the victory to the Ottawa Senators.

-In addition, the Habs announced after the duel that forwards Riley Kidney and Joshua Roy were cut from training camp and assigned to their respective junior teams.

Under the magnifying glass

When a rookie is paired with a veteran, it's usually a good sign. We want to put the young man in a good position so that he can shine.  David Savard seems to have already taken him under his wing. On a few occasions, he took advantage of stoppage time to show her sequences on the tablet. Guhle did not hesitate to go on the attack. In addition to participating in a two-on-one climb, he came forward to beat David Rittich with an excellent wrist shot.

Increasingly comfortable, he dared to drive the puck into the opposing zone on a few occasions. He is calm with the disc. He was the most used player by Martin St-Louis in shorthandedness (4 mins 22s). He also saw playing time on the massive attack (2 mins 11s). He continued to direct traffic well in the defensive zone. He also gave out five hits. On Cole Maier's goal, he could have been a little more insistent near Cayden Primeau's half circle.

He's smart with the puck and doesn't suck the physical game. He is ready to accept checks to complete passes and initiate breakouts. At the end of the first period, his shot hit the post to the left of David Rittich. Since the beginning of the camp, he leaves an excellent business card. However, he will return to the QMJHL where he will play a fourth season with the Charlottetown Islanders.

In the offensive zone, he knows how to place himself as an option for the puck carrier. On the other hand, defensively, it is difficult. And the Jets were far from presenting an NHL formation. On Evan Polei's goal, Norlinder was unable to neutralize the Jets forward. His coverage was also lacking when two Jets forwards crossed into Canadian territory.

The number of the game

It took 50 minutes of play and five squandered chances, but the Canadian managed to score two goals on the power play. The massive Habs offense ended the night with two goals from eight opportunities.

“It took us several power plays to finally score, but we finally managed to score two. Even if we are in the preparatory match, it is important. What we build during these meetings can carry over to the season.  »

Cole Caufield scored his second goal of the preseason calendar. He put the finishing touches on a great game piece started by Dvorak and Brendan Gallagher.

“The transition was quick. It's a display of players reading the game, reacting and executing.

Marc Joannette and Cody Beach awarded 13 Minor penalties, including 10 in the last 40 minutes of play. A reality that David Savard did not greatly appreciate.

“At this level, it was a weird match. At this time of year, that's not necessarily what you want. You want to play more five-on-five time and let the guys battle it out.”