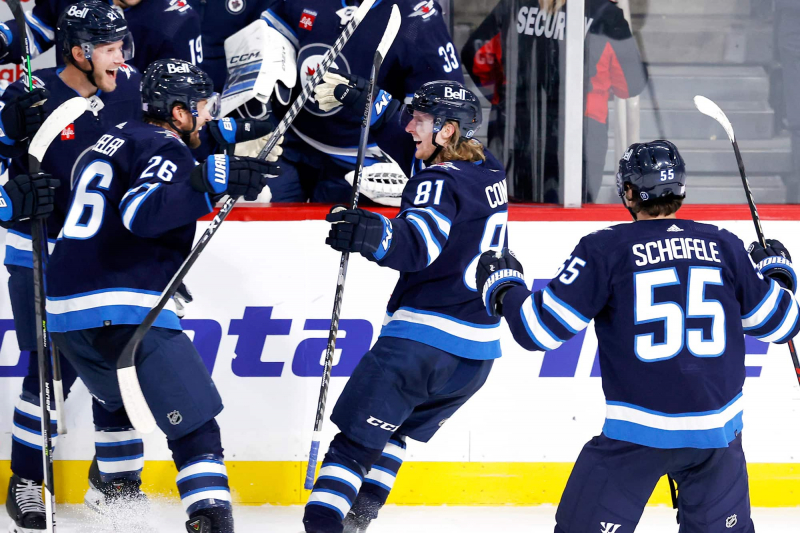 WINNIPEG | Despite Samuel Montembeault's brilliance, the Canadiens ended their trip with a 3-2 overtime loss against the Winnipeg Jets. They come home with five points out of a possible eight.

“It's been a good trip for us,” said Nick Suzuki. If we had had three wins, we would be even happier. But the Jets played well three-on-three. A 2-1-1 record is good.”

Without the Quebec goalkeeper, Thursday's game would have been less tight. He made several good saves. He saved his best for extra time as he stopped a one-timer.

On the winning goal, he was beaten by a perfect shot from Kyle Connor.

“It's a good game, but our penalties killed the pace,” said Samuel Montembeault. We fought well until the end of the match.

“Monty played a good game when we had several penalty kills,” added head coach Martin St-Louis. We lost the game in overtime, but we were playing well enough to have a chance of winning. That's what we want, we fight. We stay in the game.”

The Jets tied the game 2-2 in the second period on a controversial Blake goal Wheeler. The big forward made contact with the Canadiens goalie before putting the puck in the net.

St-Louis asked for a review, but he didn't have the last word.&nbsp ;

“I thought I had a chance to win. I thought there was a chance for obstruction. Luckily, they quickly lost their numerical advantage. We will win a challenge one day.

For his part, Montembeault did not receive an explanation from the officials even though he was pushed outside his semi-circle. < /p>

A magic goal from Suzuki

Once again, Nick Suzuki and Cole Caufield dazzled. In the first period, he scored a superb goal after receiving a pass between the legs of his teammate.

He served the Jets defenseman a cup of coffee before threading the needle in the upper portion. We will see this goal often by the end of the season.

“Cole made a pass between his legs, explained Suzuki. I got it before going through the defenders. We were dangerous.”

The two stooges were also responsible for the only other goal for the Habs which was the work of Kirby Dach. Caufield entered the opposing zone at full speed. Jets defenders had no choice but to back down so as not to get overwhelmed. Afterwards, Suzuki orchestrated the play leading to the goal.

On his return to the game, defender Joel Edmundson made his presence felt. He spent more than 21 minutes on the ice while blocking four shots. A good evening's work.

“You can do anything in practice, but you don't want to hurt your teammates,” said the veteran. It felt good to hit a few opposing players. It was the thing I missed the most from a game. It's fun.”

“He has a presence,” St-Louis said. He has more hockey in him and we don't always give him the credit. You know it when he's on the ice.”

Against the Jets, he formed a very physical duo with Arber Xhekaj. It looks like they've been playing together forever.

Pierre-Luc Dubois often has good games against the Canadiens. This was the case again on Thursday. The Quebecer scored a goal with a superb wrist shot. Then, a little later, he became an accomplice to Blake Wheeler's goal.

Jonathan Drouin had a good game. He had a few scoring chances, including a golden one in the third period. The forward was also solid off the puck as he broke two Jets plays on strong defensive plays.

Author of 47 goals last season, Kyle Connor has been looking for himself since the start of the season. He only had one goal before the game. However, he snapped his bad overtime streak by scoring the game-winning goal for the Jets. A net that will free him from enormous pressure.

Nick Suzuki scored a goal worthy of the games of the week in the first period. He accepted a skillful pass from Cole Caufield before serving a cup of coffee to Dylan Demelo by cutting to the net. He beat Connor Hellebuyck with a shot to the top.

EDMUNDSON NOT TOO RUST

Joel Edmundson made a comeback after several weeks out. inactivity. The veteran didn't look too rusty. Paired with Arber Xhekaj, he was used for over 20 minutes while blocking four shots. A good introduction. Besides, Xhekaj was inspired with nine hits.