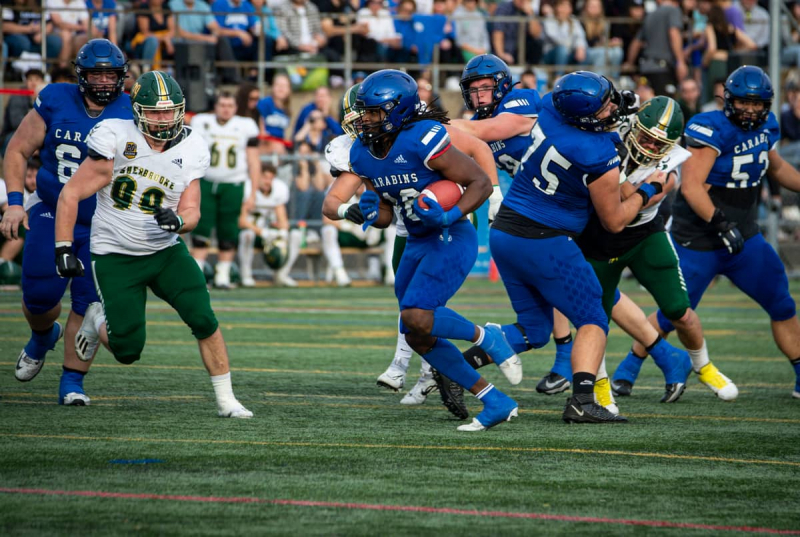 Guilty of multiple penalties, the University of Montreal Carabins nevertheless did enough to defeat the Vert & Gold from the Université de Sherbrooke by a score of 23 to 15 and advance to the Dunsmore Cup final on Saturday at the Complexe sportif Claude-Robillard.

This was the story of the encounter; UdeM retreated almost as much on penalties as Sherbrooke advanced with the ball. The Blues were found wanting 18 times, for losses of 200 yards. Unsportsmanlike conduct, roughness, for restraining, seizure of face shield; the whole rule book went through it.

Fortunately for the local favorites, quarterback Jonathan Sénécal was in great shape. He had 24 of 34 pass attempts for 264 yards.

The Carabins were unable to score a touchdown in their last game against Sherbrooke. The scenario was very different this time as they reached the end zone on their first possession. After a long action, Fabrice Hennekens completed the game with a sneak.

In addition to numerous losses of ground, two touchdowns were canceled after handkerchief throws. At the end of the second quarter, Hassane Dosso crossed the paying zone, before his fine effort was refused by the officials. Sénécal targeted him again in the next game for the major, and this time without penalty.

Dosso was pretty effective with nine carries for 60 yards. Injured for the majority of the season, he has made a good return to action since last week. Twice, Carabins fans got a little scared when they saw the star player take time to get up.

On offense for Sherbrooke, quarterback Anthony Robichaud mostly combined his efforts to those of the William Marchand. The receiver caught seven balls for 86 yards, including one in the end zone.

The Greens only got 218 yards of offensive gains.

The one of the highlights of this encounter took place before half-time, when kicker Jacob Camiré was injured. At the time of a clearance an opposing player fell heavily on his leg. That was the end of his match, he who was seen on the sidelines with a cast.

In the Dunsmore Cup final, the Carabins will face their arch rivals, the Rouge et Or from Université Laval, who defeated the Concordia Stingers 38-27 on Saturday. This duel will take place next Saturday at TELUS-UL Stadium.