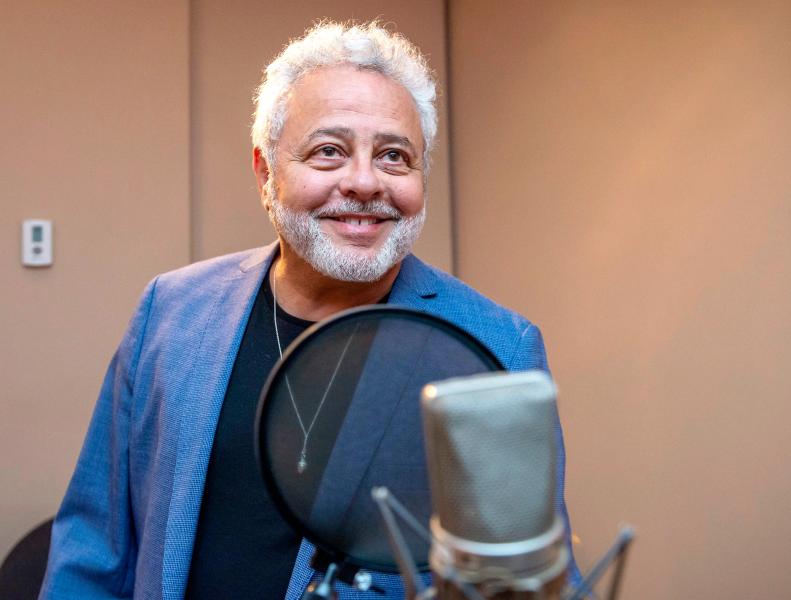 Handsome little man during his first communion in Egypt. Two years later, he would immigrate to Canada with his family at the age of 10. Already the great French songs rocked his childhood. At home, we listened to Bécaud and Aznavour, songs that he would sing on stage 40 years later.

Manuel in all the splendor of his 23 years! It was in Florida in 1980, while he was singing on a small terrace on the Sidewalk. A few years later, he would become the host of the programs Jeunesse and Pop Express on Télé-Métropole (TVA), and the general Quebec public would discover him.

30 years ago, a photo taken by his cousin Antoine Gaber, with his cat. They had printed lots of boxes of this photo to sign autographs for fans. The funny thing is that Manuel didn't like cats that much back then.

Pretty face reminiscent of a certain… Xavier Dolan, with Celine Dion in 1986, during a show by the singer in Montreal. At the time, 30-year-old Manuel was writing songs for himself and others. He will write more than 300 in his career, notably for Patrick Norman and Ginette Reno, including the popular It's zero, for Julie Masse.

In 2002, 20 years ago, Manuel was now playing a lot. That year, he landed the role of a Chechen brigand in the film Beyond borders starring Angelina Jolie. He now has 45 years in the business and has appeared in some 25 films and 30 TV series.

Manuel plays the role of Dennis, the owner of the Bourbon Room, in the musical Rock of Ages, a major Broadway hit presented in French in Montreal, a large-scale show with five musicians and thirteen actors and singers. A slew of hits such as Can’t Fight this Feeling and I Want To Know What Love Is. At the St-Denis Theater from October 27. See musicorspectacles.com.

The actor is from the series The fault. He plays engineer Edmond Chamfort, one of the potential suspects in a new investigation by Detective Sergeant Céline Trudeau (Isabel Richer). Wednesday 9 p.m. on TVA. He also plays the role of Nicolas in the series Les moments parfaits. Wednesday at 8 p.m. on TVA.

Manuel has adapted into Quebec, with Serge Denoncourt, the songs from the musical Annie. He is collaborating on a new TV show hosted by Sophie Fouron. He is still doing voice acting and will be seen on the big screen in 2023 in the horror movie Disapointment Blvd. He is the father of Xavier Dolan and Jean-Philippe Tadros.