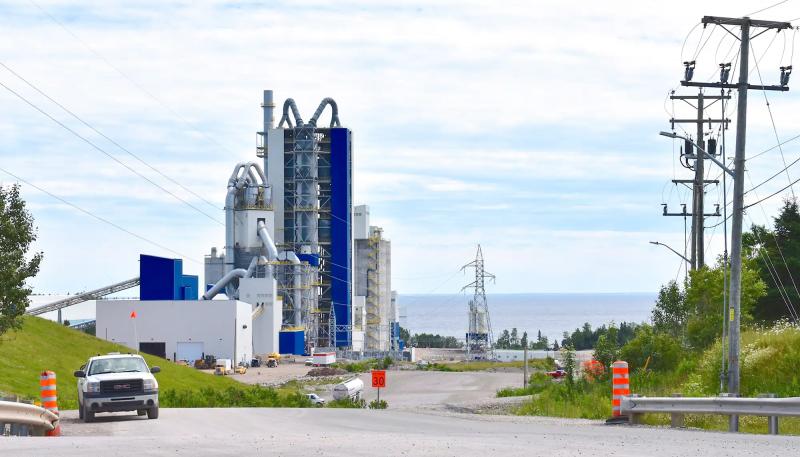 The McInnis Cement Plant hid information from the Department of the Environment about its sticky dust emissions in the summer of 2020, our Bureau of Investigation found.

< p>In June and July 2020, during the first episodes of cement dust, the Port-Daniel–Gascons company told the ministry that the fumes had not left the site.

She also assured on one occasion that she had not received any complaints from citizens and that she had not noticed any dust “around”, show documents obtained by the group Environnement Vert Plus and < em>The Journal thanks to the Freedom of Information Act.

But at the same time, she was quietly cleaning the dusty cars and houses. This situation continued unbeknownst to the government for two months, until The Journal asked questions on July 29, 2020.

The dust problems still continue, as evidenced by this photo taken a few days ago on the car of a neighbor of the factory.

Sticky dust coats cars, windows and outdoor furniture, and is difficult to remove. They killed chickens and ruined gardens.

At the time, the company maintained that it had informed the ministry of each dust episode. The department claimed it was never notified that neighbors of the cement plant had been affected.

Our records show that Ciment McInnis, which has since been sold to Ciment St-Marys (Votorantim Cimentos) , did report about ten events in June and July 2020, but never mentioned the neighbors.

A citizen had already filed a complaint with the cement plant on June 30, and the company's environmental adviser had even visited the site the next day to inspect the damage. Arrangements were made for a company to come and clean up.

It was only after calls from the Journalto the ministry that an inspector went on site on August 4. Cement McInnis then admitted to having received “many complaints from citizens” since June 5 and having organized the washing of cars and residences.

The inspector then recommended the initiation of investigations, which have not been completed to date. The dust problems persist and the ministry is threatening to use an order to force the cement plant to comply with the law.

Ciment St-Marys was not operating the plant in the summer of 2020, but recalls that during incidents, “priority is given to meeting deadlines” reporting. It is possible that some facts are not yet known at this time.

“Since June/July 2020, significant improvements have been made in the reporting process to the [department],” said spokesperson Christopher Mason. If a dust event occurs, inspections inside and outside the site are carried out, and the ministry is informed immediately if the dust has left the site.

A report is made by the environmental advisor of the cement plant for an episode of clinker dust (one of the components of cement) which lasted 10 minutes. “The dust remained on the factory site,” it says.

Stopping a dust collector causes a “big cloud of dust in the air”. Later, the plant's environmental advisor claims that the cloud was not as big as originally described.

Around 12:30 p.m., the company reported a breakage resulting in a dispersion of dust, which occurred at 5 a.m. Because of this delay before the ministry was informed, the cement plant received a notice of non-compliance on July 14. In his audit report, the ministry's on-duty worker notes that he suggested to the cement plant's environmental advisor to go and see “around the plant if the dust is visible on the ground and on the cars. ;”. The councilor calls him back to tell him that nothing is visible and that he has not received any complaints from citizens. A telephone follow-up is also done on July 6.

Various reports are made by the company: it is about dust which “goes into the air”, “dust emitted into the atmosphere”. and “quarry fallout,” of “non-recoverable dust,” but with an easterly wind blowing “in the direction of the quarry.” On another occasion, the dispersion of dust during a truck load was reportedly stopped by wind walls.

All the while, residents complained about dust on their property.

Few risks, according to Public Health

Regional Public Health and the Ministry of the Environment held a public meeting on August 2 to reassure the population about the impacts of this dust on health . According to them, this dust presents little risk, but they recognized that it remained a nuisance causing stress.

About fifty people were on site. Pascal Bergeron, spokesperson for Environnement Vert Plus and who took part in the meeting, said that several people expressed concern.

“ People were incredulous. They find it very hard to believe that there is no impact on their lung health,” he told the Journal. transmit to us?