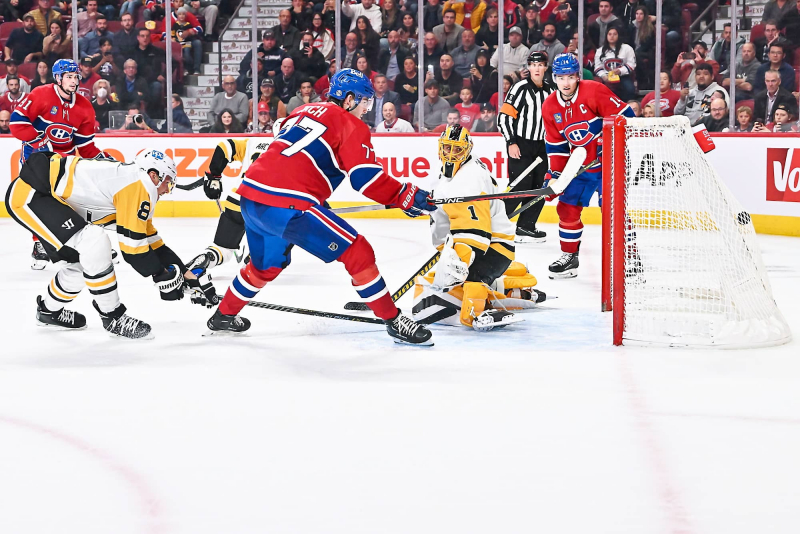 Yet that's where he was when Kirby Dach gave the Canadiens a dramatic 3-2 victory in overtime.

A goal that allowed the Montrealers to defeat the powerful Pittsburgh Penguins and end a short two-game losing streak.

This first goal from Dach in the blue, white and red uniform concluded a brilliant comeback. Down 2 to 0, following two goals from Evgeni Malkin, the troops of Martin St-Louis fought hard. Even the coach played his part by withdrawing his goalkeeper with two and a half minutes to go in the third period. A few seconds later, Cole Caufield tied the game.

In each of their first two games of the season, the Penguins had moved the strings on six occasions. Given the magnitude of the task that seemed to await his players, St-Louis had advised them to spend as much time as possible in opposing territory.

Pressure and circulation of the puck deep in enemy territory allowed the locals to often buzz near Casey DeSmith's net.

The little-expected trio of Juraj Slafkovsky, Jake Evans and Mike Hoffman applied these concepts profusely. Same thing for the duo of Nick Suzuki and Cole Caufield, with whom we had paired Sean Monahan.

Excited to be on the same rink as Sidney Crosby, Kaiden Guhle quickly regained his senses.

The most used player by St-Louis (24 min 43 s), mainly against the trio of the famous number 87, the 20-year-old Albertan did marvelously well. In addition to provoking three favorable turnovers, he collected the first two points of his NHL career.

It was he who set the table for Suzuki's second goal of the season by passing the puck to him with a solid backhand pass in the neutral zone.

+ Nick SuzukiHe spent more than 22 minutes on the playing surface, an eternity for a forward We understand Martin St-Louis for trusting him In addition to scoring and getting an assist, he took eight shots and won 67 of his faceoffs, including the one that led to the tying goal scored by Cole Caufield – Arber XhekajWe knew it was going to happen, but right now the NHL game is way too fast for him His difficulty keeping up with the prompted to take two penalties The 21-year-old Ontarian would do well to spend a few weeks with the Laval Rocket, where he could develop at a pace that better suits him

Love and hate towards Petry

As is the custom for players facing their old formation for the first time, Jeff Petrywas treated to his tribute video during the first commercial break. Applauded warmly, the American waved to the crowd. For the rest of the match, the defender received his share of boos, sometimes more noticeable, sometimes muffled in the 400 sections. For his part, Ryan Poehling was treated to a more sober welcome. He had to settle for a mention “Welcome back! on the scoreboard.

The goal of Kirby Dachbrought a rare victory to the Canadiens, against the Penguins on the Bell Center ice rink. It was only the second time in the last seven meetings that the Habs defeated the boards in Crosby at home. He hadn't made it there since October 13, 2018.

Massive offense couldn't choose a better moment to produce his first goal of the season, the one that gave victory to CH. However, the team's shorthanded outfit is worth mentioning. The units that Martin St-Louis deploys short of a man do a colossal job. They've contained the Penguins' big guns on three occasions and have allowed only one goal in 12 appearances on the ice since the start of the season.

The Canadiens had to call on Samuel Montembeault to face the Penguins' shots in addition to recalling Cayden Primeau from the Laval Rocket. This time, it's not an injury, but rather the arrival of the stork, a third time for the Allen family, which kept Jake Allen away from the Bell Center on Monday.