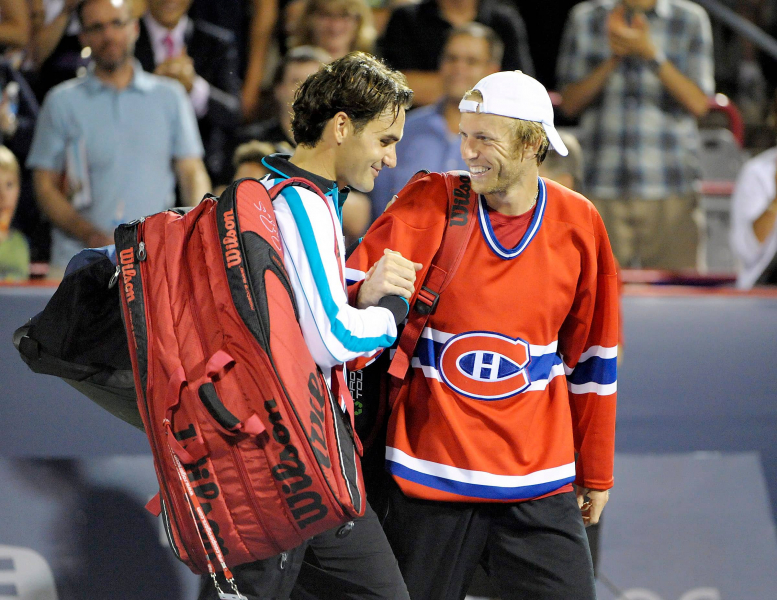 Is Roger Federer the greatest tennis player in history? The question divides, especially since the two other members of the Big three have beaten the legend to the charts of Grand Slam titles.

One thing seems certain, however: his legacy is incomparable.

Because even if his two most talented contemporaries – Rafael Nadal and Novak Djokovic – are sure to supplant him for major wins, Federer changed tennis forever.

“He put the sport in his hands in a very unique way,” notes Eugène Lapierre, director of the Omnium Banque Nationale de Montréal, who has rubbed shoulders with the Swiss over the past two decades.

“He did everything well on the pitch,” he adds. In his prime, it looked like he was invincible. He could exchange for a very long time in the back of the field, it was only Nadal who gave him a hard time on clay.

Mr. Lapierre also praises the quality of Federer's service and his precision shots.

“His speed of counter-attack, attack, his game on the fly… He mastered all aspects of the game without even giving the impression of forcing”, he also lists.

“The grace of his game”

Coach at Tennis Canada, Sylvain Bruneau believes for his part that the great champion is the model to follow for both players and the instructors.

“He is a legend by his sporting record. [What we will remember are] his 20 Grand Slam victories, his number 1 places, but, more than anything, the grace of his game, added Bruneau. Everyone loved their game.”

The wheel is turning

But there you go, even legends don't last forever, and Mr. Lapierre didn't wasn't particularly surprised when he learned that the Swiss was hanging up his racquet.

Despite his incomparable heritage, the Montreal tournament director remains convinced that the younger generation is ready.

Engaged in humanitarian aid through his foundation, Roger Federer travels to Namibia in February 2020. We see him here meeting a young girl.

“The story continues. There will continue to be big stars, assures Mr. Lapierre. It happened when Andre Agassi, Pete Sampras or Martina Navratilova retired. Sport takes care of introducing us to new athletes of great talent.

“I must say, however, that with Roger, we had quite a thing! he adds, laughing.

And now, Mr. Lapierre, THE question: Is Federer the greatest?

“It's not Eugène Lapierre who will determine that,” he says. There was Rod Laver, Billie Jean King, Serena Williams, Nadal, Djokovic…”

“But in terms of the impact he has had on his sport throughout his career, I feel like he's among the three or four greatest in history. »

1998
At the junior level, he won the singles titles and doubles at Wimbledon. The same year, he played his first professional match in Gstaad. He lost at the start to Andre Agassi.

2000
He played in two ATP finals, in Marseille and Basel. He loses each time, against Marc Rosset then against Thomas Enqvist.

Federer wins his first singles title. In the final in Milan, he beat Julien Bouttier. He also got his hands on the Hopman cup, alongside Martina Hingis.

2002
At 21, he pocketed his first trophy of the Masters 1000 series in Hamburg. He cracks the top 10, which allows him to participate in the end-of-year championship.

2003
At Wimbledon, Federer won the first of his 20 Grand Slam titles, defeating Australian Mark Philippoussis in the final.

2004
This is the beginning of its dominance. The Swiss won 11 titles during the season, including three majors (Australia, Wimbledon and the United States). He became world number 1 and remained so for four years.

Federer had the best season of his career. He wins 12 tournaments and is one victory away from winning the Grand Slam. This is Rafael Nadal, his great rival, who beat him in the final at Roland-Garros. He only lost five games, four of them against the Spaniard.

2008
After 237 consecutive weeks ranked first in the world, Roger gave way to Nadal, who beat him after an anthology final at Wimbledon. He won his first Olympic title (in Beijing, alongside Stan Wawrinka) and won the 13th major of his career at the US Open.

In June, he beat the Swede Robin Soderling at Roland-Garros, which allowed him to pocket the only major missing from his list. A month later, he defeated Andy Roddick in the Wimbledon final in the longest fifth set in Grand Slam final history. This 15th major trophy puts him ahead of Pete Sampras in the record books.

2015
After a few more difficult years by his standards, the Swiss is regaining his luster. In Brisbane, he won the 83rd title and the 1000th match of his career, against Canadian Milos Raonic. He reached the final at Wimbledon, New York and at the year-end Masters, where he was beaten each time by Novak Djokovic.

2016
His season was amputated by a knee injury. For the first time since 2002, Federer is excluded from the world's top 10.

After a shortened 2016, the champion made a strong comeback in the following two seasons. In Australia, he won the 20th Grand Slam title of his career. He is the first to cross this mark. That same year, he became the oldest world number 1 in history, at 36 years and 10 months.

Federer wins in Dubai the 100th tournament of his career, in February, beating Stefanos Tsitsipas in the final. The same year, he lifted in Basel, ahead of Alex de Minaur, the 103rd and final trophy of his career.

2021
At Wimbledon, he lost in the quarter-finals to Poland's Hubert Hurkacz. This is his last professional game to date. He announces shortly after that he must undergo another surgery on his right knee. Roger totals three in a year and a half.

2022
On September 15, he announces that he will play in the Laver Cup, from September 23 to 25 in London, the last meetings of his illustrious career.

THE FIGURES THAT MADE HIS LEGEND

At the Beijing Games in August 2008, Roger Federer and his compatriot Stan Wawrinka won the men's doubles gold medal at the expense of Sweden's Simon Aspelin and Thomas Johansson. Federer will never win Olympic gold in singles, one of the few titles missing from his prestigious record.

Roger Federer poses with the trophy of the champion of Wimbledon, the first major title he won, in 2003, beating the Australian Mark Philippoussis in the final. At her side is the American Serena Williams, crowned in the women's category that year.