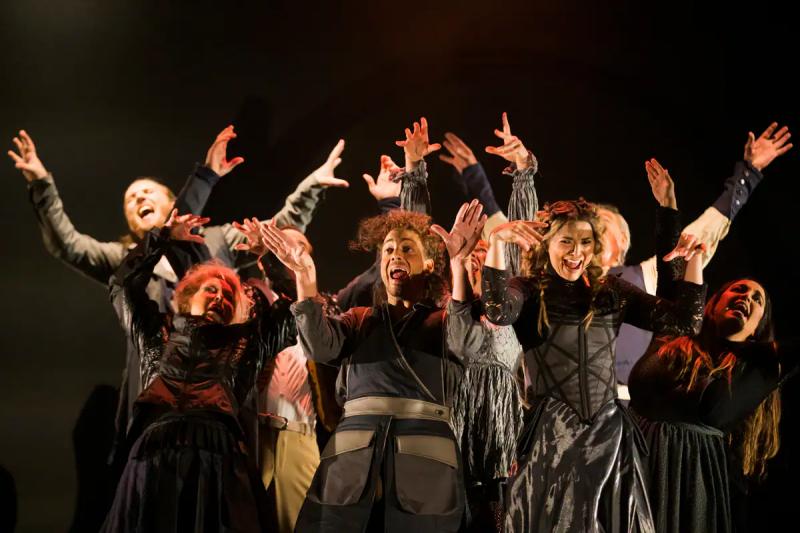 The premiere of the musical theater play “La Corriveau-La Soif des corbeaux” took place Thursday evening at the Center culturel Desjardins de Joliette in front of an enthusiastic audience. Was the one that folklore transformed into a witch who killed seven husbands rather an abused woman trying to defend herself?

The play “La Corriveau-La Soif des corbeaux”, created by the Théâtre de l'Oeil Ouvert, revisits the story of Marie-Josephte Corriveau, sentenced to death in 1763 by a British court-martial for the murder of her husband, and whose the body was exposed for a month in an iron cage, at the crossroads, in Pointe-Lévy. This intended exemplary punishment, a few years after the British conquest, strongly marked the spirits. Thus, over time, oral tradition ended up making the character of Corriveau a witch who killed her seven husbands.

Geneviève Beaudet co-wrote the text of the play and the lyrics of the songs of “La Corriveau-La Soif des corbeaux” with Félix Léveillé. This story, taken up by many authors through the ages, has deeply inspired her, she confided in an interview. “What fascinated me was that under the caption, there was a real story, which resonates a lot with current events. We based ourselves on the facts reported in the book by historian Catherine Ferland, where we learn that her husband was violent, that she had fled, but that the authorities had forcibly brought her home. . Would things have gone differently today?”

In a staging by Jade Bruneau and under the musical direction of Marc-André Perron, actors and musicians, starring Jean Maheux, Simon Fréchette Daoust and Frédérike Bédard, transport us from one era to another, between reality and fiction. To the rhythm of exciting, original songs that we nevertheless have the impression of knowing by heart, “La Corriveau-La Soif des corbeaux” makes us laugh, cry and make us indignant. A great moment of collective outlet to see the cruel tribunal made fun of, which, through the intended exemplary punishment of Marie-Josephte Corriveau, once punished us all.

“It’s good that we revisits history based on the facts we have today, but it's also good that we continue to make it into fiction. After all, it is folklore that has allowed us to remember Corriveau. That we want to revisit his story today is his best revenge, I am very happy about that, ”testified in an interview Léolane Kemner, descendant of seven generations of La Corriveau.

“La Corriveau-La Soif des corbeaux” will be presented from July 7 to 23 at the Center culturel Desjardins, in Joliette, from July 27 to 31 at the Théâtre Le Patriote, in Sainte-Agathe-des-Monts, then from August 4 to 20 at Carré 150, in Victoriaville.