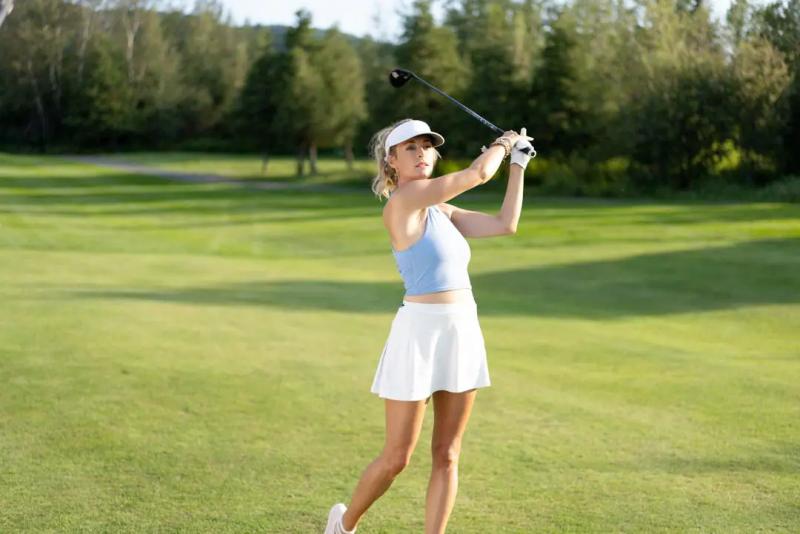 An outdoor camera? Yes. “I started playing golf at eight years old with my grandmother who was my favorite partner, explained Louis Godbout during an interview with the QMI Agency. At the same time, I don't really care about golfers, I find myself ridiculous on a golf course. One of the things that I find ridiculous is that during the four hours of a game, I am brainless. I'm obsessed with the ball. I find myself ridiculous. We are in a very wide expanse, we walk for six kilometers, but we are locked in our head.

The star, the one around whom the whole plot revolves, is Florence, played by Christine Beaulieu. In the film, she is the “pitoune”, yoga teacher, very zen. With his boyfriend, Hubert (Benoît Gouin), and his partner André (Steve Laplante) – the two men have a seniors' residence business – they play their part until a certain Michel (Alexandre Goyette) joins to them and change the game. But the whole thing is presented as a black and grating fable.

“There is an inherent dimension of irony in golf. It's a sport where everyone is bad because it's difficult, said the filmmaker. Everyone is diligent, everyone practices, but everyone fails. It's a sport where there's a lot of emphasis on fair play, etiquette, where players lie all the time, cheat all the time, tell their golf stories. It is a natural theater for a satire of behavior.”

And the behavior is absurd. Like André with his remote-controlled shopping cart — “yes, it really exists”, confirm Benoît Gouin and Louis Godbout —, Florence and her yoga poses between two holes, Michel and his glasses of beer whenever he can or even Sébastien René in the role of Sepp, the psychorigid golf employee.

“The satire was natural. Showing a golf course with a Mozart mass from the beginning of the film sets the tone. We feel that we are not in full realism and therefore the actors can afford sometimes to say lines that are not quite natural, provided they say it as if they believed in it, ”he said. -it added.

The actors were able to benefit from golf lessons and were able to prepare for their roles. Because Les cheaters was filmed in the summer of 2020, the team ended up “at the Bromont Inn” alone since the rooms were closed to the public. Everyone met constantly, which made it possible to develop an incredible bond.

An adaptation for Christine Beaulieu

“Even if the character of Florence is very superficial, one cannot help but doubt her irony,” said Louis Godbout, referring to Christine Beaulieu's “natural irony”.

Florence is also a yoga teacher. “The interpretative challenge, for me, was in the rhythm. Florence is slow, she thinks, she is very zen, very composed. But the main challenge for the actress was the rather revealing clothing of her character, as well as the extremely suggestive poses. “It's easier for me to play a character with a big coatwinter, I am very camouflaged in my character. There, I am very naked, literally. It's an area where you're more vulnerable and I had to be very confident to be able to do what I did.”

Benoît Gouin also had to perform a mental exercise to embody Hubert, a job he explained with reference to theatre. “I played the character of Don Juan by Molière and when you tackle such a character… you try to put on the Don Juan mantle, but it doesn't work. Then, one day, we realize that we are Don Juan. He always has a part of himself in a role.”

And Florence is not the only ambiguous character — “She's also a psychopath,” insisted the filmmaker — the three men also have their secrets and their neuroses. And it all comes down to a golf course. “No one can escape what will be revealed by itself,” indicated Benoît Gouin.

The cheaters arrives in Quebec theaters on August 12.< /p>