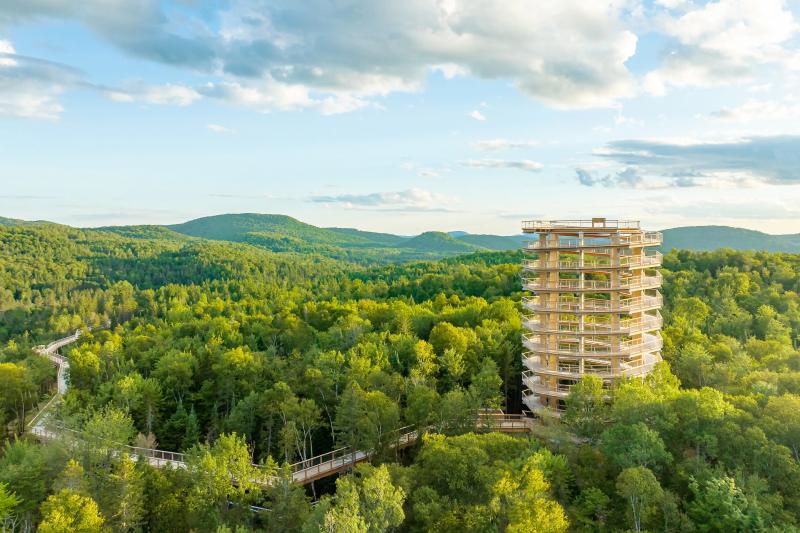 I recently wrote you a word about this new attraction near Mont-Tremblant. My colleagues too. I was really looking forward to going there to tell you more about it, since the opening took place on July 24th.

Located in the forest in Mont-Blanc, the Sentier des peaks is aptly named. A 730-meter-long treetop walkway leads to a viewing tower formed by a spiral walkway. The tower is topped with a belvedere 40 meters high, the equivalent of 12 floors.

Inaccessible? No way. I met people of all ages there, even families with strollers and elderly people in wheelchairs with the assistance of a relative.

The tower is topped with a belvedere with a 360 degree view.

From bottom to top

To access the walkway, you first go up by stairs or an elevator. Solid, the walkway is laid out with a slight upward slope that does not require any particular effort.

Going up the tower, you reach the belvedere giving a 360-degree view of the Laurentian range. Arrows on the ramp indicate the mountains you can see: Mont Blanc (2 km), Mont Tremblant (13 km), Mont Kaikoop (28 km)…

In the center, we can walk on a taut net with a dizzying view of the ground. Some rush to take pictures, others hesitate and are challenged…

The Sentier des Cimes was implemented by the German company EAK (Erlebnis Akademie AG) which has erected 12 sites of the same type in Europe, including in Alsace and Bavaria. It's their first in North America.

It all started in 2013. During a camping trip to Delaware, Nicolas Joly, now general manager of the Sentier des cimes, met a family German-French girl whom they visited the following year.

During their stay, they went on the Treetop Trail in the Czech Republic. Nicolas Joly was very impressed. In 2016, when he was looking for a project for the MRC des Laurentides to relaunch the site of the former fish farm in Saint-Faustin, the idea was spontaneously launched by his daughter Léa at dinner.

< p>However, his German friend Eckart had gone to the same school as the architect of the EAK company. It was the gateway for the idea to make its way to its realization in Mont-Blanc.

The climb to the belvedere is easily accessible.

Picnic on the edge of the Richelieu

both sides of the river there are several picnic areas with local produce to pick up en route. Tourisme Haut-Richelieu offers five tours with a map that can be downloaded to your phone.

At Notre-Dame-de-l'Île-Perrot, in the Parc historique de la Pointe-du-Moulin, is the oldest windmill still operational in Quebec. Visit with guides in period costume. Children are welcome.