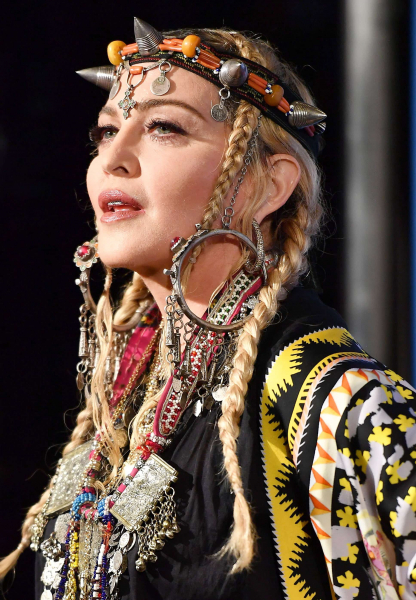 The woman who for decades has been dubbed the Queen of Pop and who for 40 years has shattered records for album sales and concert tickets has sparked controversy all throughout his career. A provocation that served her notoriety well, an irreverent image that she herself shaped, presenting a cocktail of religion, sexuality and freedom. Today, at the age of 64, Madonna refuses to age, even though she is aware of her decline.

The author, Lucas Prud'homme-Rheault, who has studied the famous singer's entire career since 2008 to produce his work, goes from quotes that bring various thoughts on the international caliber icon in order to paint a particular portrait.

The one who sold more than 335 million albums had a modest start. Originally from Michigan, Louise Veronica Ciccone, lost her French-Canadian mother when she was only five years old. An event that would have had a strong impact on her. Very young, she insisted with her father, Italian-American, to take ballet lessons.

She dreams of a career as a dancer and wishes to leave the family nest in 1978 to settle in New York. Against the idea, his father will cut him off.

It is in the big apple that she will do her classes the hard way. With only assets of $35, but an immeasurable dose of determination, she will seek to quench her thirst for notoriety. But the glory will not be instantaneous. She would have been raped in addition to having made bad encounters. Nevertheless, this will not be a brake on his ambition, encouraged by his dance teacher. To pay for her studies, she worked as a waitress and posed as a nude model.

It was in 1984 that she rose to international fame with her first big hit, Like a Virgin , album sold more than 20 million copies. Two years later, his album True Blue will experience the same success. Influenced by David Bowie and Marilyn Monroe, Madonna will still create her own style.

Madonna likes to provoke using religion and sex. Quickly, she will become a fashion icon by wearing crosses as jewelry, accompanied by sexy clothes.

She also mixes sex and violence with fashion and femininity, thus knowing that she will be talked about.

The mother of six children, four of whom are adopted, is ready to do anything to compete with Lady Gaga. Wanting to fight against ageism, Madonna does not hesitate to resort to cosmetic surgery, to follow draconian diets and to practice fasting while maintaining her body with the help of various exercise and yoga programs. /p>

Of course, Madonna has orchestrated everything from her rise to the top to the most provocative controversies. Absolutely everything, except its decline.