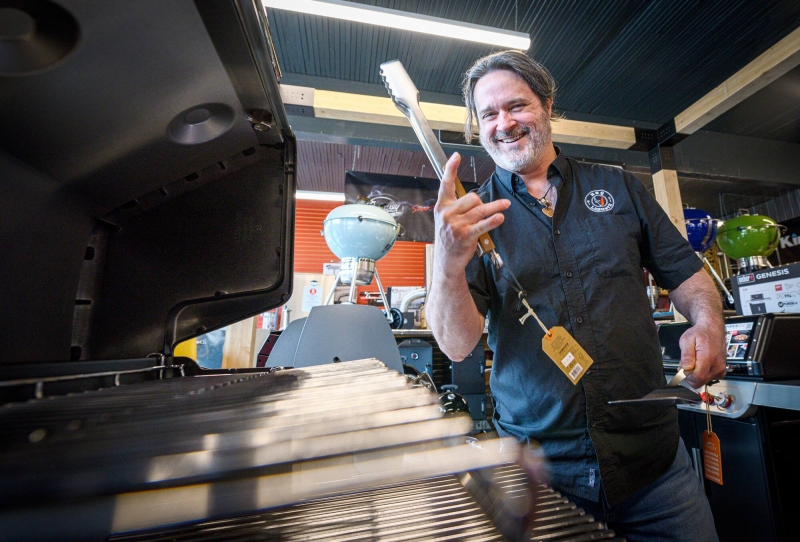 Gaining more and more followers in Quebec, the barbecue has become more than a way of cooking, it's a way of life for those who have adopted a passion for grilling, a hobby time visibly contagious, according to the growing enthusiasm.

“Customers who have 3, 4, 5 devices that each do specific things, it is no longer rare. They are truly trippy,” says Ghislain Labonté, co-owner of the BBQ Labonté specialty store.

Le Journal today presents portraits of these enthusiasts for whom the barbecue has become a religion. Formerly reserved for beautiful summer days, the passion for grilling is now lived rain or shine, twelve months a year in Quebec.

“People tell me that their season lasts from April to October and then they put away their barbecue, but it's important not to,” insists Clément Chiasson, an enthusiast who has launched online training. “There is no question that I wait eight months to eat my steak in the embers! »

Explosion of the phenomenon

In fact, the passion of these grill fanatics is such that it is not uncommon for Ghislain Labonté to welcome customers from Saguenay–Lac-Saint-Jean or even from Gaspésie to his store in Drummondville, in the Centre- du-Québec.

“You have to be trippy to go all that way to shop for BBQs, buy spices or come for advice,” laughs Mr. Labonté.

< p>This is just one example among others of the rise of barbecues in Quebec. Butchers are also at the forefront of this madness and admit that the market has grown in recent years, especially with the pandemic.

“It completely exploded. The restaurants were closed and people realized that they could eat well at home,” analyzes Anthony Bérubé, manager of the Délecta butchery in Quebec City.

And many have also realized that the barbecue, although intimidating at first sight, was accessible. No need to be a chef to find your account. “Even the people who were burning water realized that they weren't that bad, that it wasn't that hard,” jokes Ghislain Labonté.

a Passion that can be shared

In the era of social networks, the flame is transmitted all the more quickly as the channels and accounts dedicated to barbecues multiply. The ripple effect is significant and experts are observing it.

In fact, the taste of barbecuing has become a way of life for many who are ready to get up at 5 a.m. Saturday morning to start smoking a piece of meat that will be devoured with friends in the evening.

“The projects of young dads have changed. It's no longer going to the bar on Friday night, it's barbecuing all weekend. My buddies, who I used to go out with, have become my barbecue partners and that’s how it is for a lot of people,” says Anthony Bérubé.

“It goes beyond cooking,” adds Patrick Lepage, co-owner of AAA Boucherie Gourmet in Montreal. “We have a population that is erudite about the phenomenon, who wants to learn about it. They read, they go on the internet, it's a real passion. »

Dany Tremblay, from Lévis, became a pit master (BBQ professional) in just a few years. He now competes all over the United States, with several sponsors allowing him to pay for his season, which costs him around $50,000.

After discovering the infinite possibilities of the barbecue, Dany Tremblay equipped himself with no less than 14 machines in just one year. The brisket ace of ribs now travels 60,000 km a year for professional competitions across the United States.

But before he took a course in 2016, nothing destined Dany Tremblay to become pit master (barbecue professional).

< p>“I made hot dogs and hamburgers on my little barbecue, like many people,” recalls the resident of Lévis.

However, the weekend in the woods at BBQ Camp offered by the Lavoie brothers of BBQ Québec will have changed his life.

“We were 19 and we cooked 1000 pounds of meat during our weekend without ever using propane. I had a blast at the end”, says the enthusiast who got so hooked that he started buying barbecues almost compulsively. “I bought 14 in the same year. »

The madness of competitions

The following year, Dany Tremblay and his wife were gripped by the madness of competitions.

The one who competes under the name of Wally BBQ won his first amateur competition with his ribs lifts he had painstakingly developed.

“The week before the competition, we did 70 racks of ribs to make sure we found exactly what we were looking for,” he explains with a laugh.

If you haven't figured it out yet, Dany Tremblay is the kind of guy who goes all out. But we have to admit that it will have paid off, at least in strong emotions.

“Two weeks after my first amateur competition, I made the leap to the pros, where I finished 3rd for my chicken and 4th for my ribs. We did about twenty competitions that year. And I went to the World Food Championships, which is the Stanley Cup of BBQ, and I finished 5th in the world”, underlines the pit master, who compares the sensation to “direct adrenaline in the veins”.

The Lévisien now travels 60,000 kilometers a year for his competitions, dragging in his “WallyBago” his three competition barbecues which are worth $5,000 each.

His talent has earned him a bunch of sponsorships on both sides of the border and fortunately since each competition season costs about $50,000.

Clients want to broaden their horizons

Anthony Bérubé, director of the Délecta butchery in Quebec, says the public has really discovered the possibilities of barbecue cooking, even seeking to get into cooking extravagant pieces.

The high-speed development of the barbecue industry will also have brought about a transformation of the butcher's trade, which has become a companion, an adviser for these enthusiasts who want to broaden their horizons. .

To illustrate this change, Patrick Lepage of AAA Boucherie Gourmet confides that his 26 butchers are also mostly trained cooks.

In this way, they are not only there to slice meat, they support the customer.

“Just cutting meat is not enough anymore. […] The bond of trust is important and most of my butchers are also cooks precisely to be able to bring the customer to their destination. »

These skills also make it possible to offer new cuts to customers who are increasingly fond of new products.

The flank steak, for example, was not commonplace a few years ago.

However, it is now found among the best sellers in specialized butcher shops.

“The tab is very popular, but they are very fragile cuts. These are pieces that are classified as offal elsewhere,” explains Mr. Lepage.

He points out that these new and varied cuts also allow butchers to maximize the use of the whole carcass, which makes it possible “to offer pleasant prices for the customer”.

Some are also now willing to shell out big bucks for quality parts, something you also didn't see in the not so distant past.

“I have Japanese wagyu that retails for $125 an inch and I have people coming in and taking 2, 3, 4. We slice the steak and our hands are shaking so much it's high quality,” says the director of the Délecta butcher shop in Quebec, Anthony Bérubé, drawing a parallel between meats on the grill and wines.

“It's the same thing. People have become ready for this, they have learned to take advantage of quality, to appreciate it”, underlines the merchant.

“People are eating less meat and that's okay, we're changing. But they say to themselves “the times we eat it, we want to remember it, we want it to be good”, adds Patrick Lepage.

The madness of the pieces of extravagant meats

The “Hammer of Thor”, a beef shank that is the new darling of amateur cooks who love to show off.

Tomahawk, Thor's hammer and other pieces of meat of crazy proportions are a delight for carnivores who want to put on a show for their guests. And there are more and more of them, according to the butchers who no longer supply.

“Just on Father's Day weekend, we had a promotion on the Tomahawk, a piece that is popular, but still out of the ordinary. We sold 700 of them,” still surprised Anthony Bérubé, from the Délecta butcher.

“It’s nonsense, it shows the enthusiasm and the phenomenon. »

On the lookout for trends

Same thing with Thor's hammer, a huge beef shank with the bone bare that looks just like the comic book hero's huge hammer.

After a Montreal butcher shop posted a photo of the piece on social media, the barbecue community went wild.

The enthusiasm for social networks

TikTok, Facebook, YouTube, podcasts; There are so many ways to follow barbecue enthusiasts on social networks that they undoubtedly contribute to the growth of this culinary hobby. And you don't need to be a pro to share your passion, that's the beauty of social networks.

“These are passionate people who have a full-time job and who leave TikTok. And they are really good! It is sure that it influences people to try business. Seeing them go, people realize that you don't need to be a professional cook to make good stock at home,” says Ghislain Labonté, co-owner of BBQ Labonté, happy to see the passion passed on.< /p>

“You try business and there, you invite one, you invite the other, you are proud to show that you do good food, others taste it and want to try it too. People are discovering products they didn't know about and it's solid. »