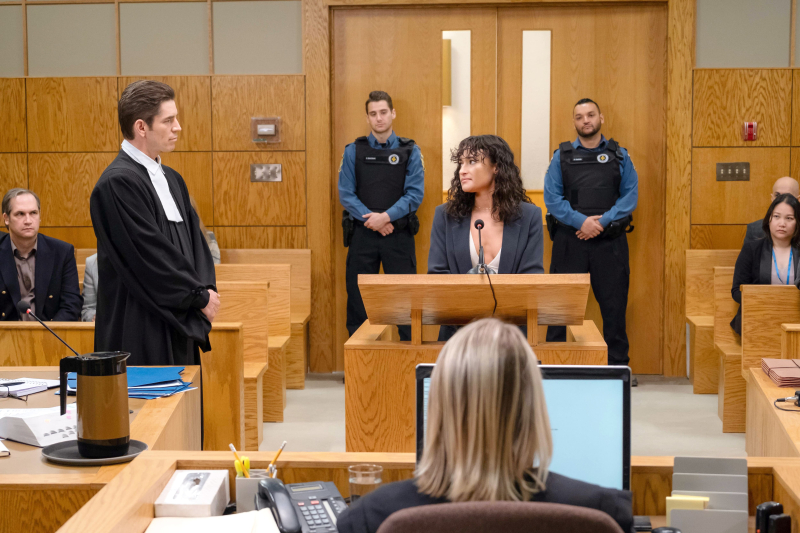 It was an open secret: in front of the listening success of“Indéfendable”, TVA confirmed Monday the return of the daily court next fall for a second season.

It's no surprise because the public has been there night after night with an average viewing of 1,511,000 viewers, from September 12 to December 15, according to the firm Numeris which compiles the ratings. “Indefendable” is practically on par with its competitor “STAT”, broadcast at the same time on ICI Télé, which obtained an average of 1,563,000 curious people, from September 12 to November 6.

The judicial daily starring Sébastien Delorme, Anne-Élisabeth Bossé, Michel Laperrière and Nour Belkhiria ended on a dramatic note, just before the holidays, when Me Frédéric Legrand (Martin-David Peters), who rents an office from Cabinet Lapointe-MacDonald, was targeted in the middle of the street, in front of his son and trainee Inès (Nour Belkhiria).

Hit by several bullets in the chest, did Me Legrand survive his serious injuries? That's what fans of the fiction produced by Pixcom, in collaboration with Quebecor Content, will know this week, as investigator Maxime Dubois (Mathieu Baron) looks into this attempted murder.

In the first episode, this Monday, which is entitled “Nuit blanche”, all the members of the cabinet are gathered in the office and try to comfort Inès, who is badly shaken. Even Dr. Lévesque (Marie-Ève ​​Perron), who we knew in the cause of Pierre Poirier (Hubert Proulx) at the start of the season, will come to support Inès.

The latter will reveal more details on the death of his sister, who was killed in a shooting several years ago.

As other causes cannot wait, Léo (Sébastien Delorme) and Marie-Anne (Anne-Élisabeth Bossé) will have to return to the courthouse for the continuation of the trial of Pascal Giroux (Xaxier Huard), accused of having brutally killed his father.

His alleged accomplice, Danny Ducharme (Maxime Isabelle), will testify for the Crown, but an unexpected turnaround will disrupt the proceedings. Giroux and his mother (Marie Michaud), who are both crazy, are hiding a heavy secret.

Surgeon Stanley Magloire (Ralph Prosper), whose daughter Catherine (Tracy Marcelin) was involved in a hit-and-run, will consult Léo preventively, the police having not yet traced the young woman, who is studying in medicine. It is the investigator Marcoux (Julie Deslauriers) who will try to elucidate this affair, showing that it is not only criminals who find themselves in hot water before the courts.

At the end of this week, the first season of “Indefensible” will be exactly halfway through, with 60 of its 120 episodes airing. According to our information, the daily is very successful on TVA+, where it has set a new viewing record, rising to the top of the most-watched programs on the platform.

The daily “Indéfendable” is broadcast Monday to Thursday, at 7 p.m., on TVA and TVA+.

Julie Deslauriers back on TV in “Indéfendable”

After landing the role of her life, that of the mother of little Henri, 2 years old, the actress Julie Deslauriers is back on the sets as an actress, she who plays the investigator Marcoux in “Indefensible”, on Tuesday, the time of an investigation into a hit and run.

Julie Deslauriers has been in the business since the age of 11, or 35, although we have seen her less in fiction in recent years. There was her maternity plan which was more complicated than expected, as well as COVID-19.

“It was still an epic to get pregnant and to have a child. In recent years, I have put all the chances on my side to start a family with my boyfriend,” she said, specifying that she had been in a relationship for 11 years.

As for “Indefensible,” it was called a week before filming. “I had two days of filming last summer and I wasn't so nervous, maybe because I was really looking forward to playing a police,” said the one we saw in ” Watatatow”, “Chambre en ville”, “Virginie”, “Km/h”, “The negotiator”, “Rock and Roland” and “30 lives”, his last major project.

Julie was delighted to be able to slip into the skin of a policewoman and carry a weapon in her belt. “It's heavy, it's big, it automatically changes the gait.” She wants to be called back for another investigation in “Indéfendable” or that 2023 brings her other opportunities to play. passionate about interior design and who writes, as a designer, a column in the magazine “Lesidées de ma maison” and who participates every month in “Salut Bonjour Week-end” on TVA for a decoration column.