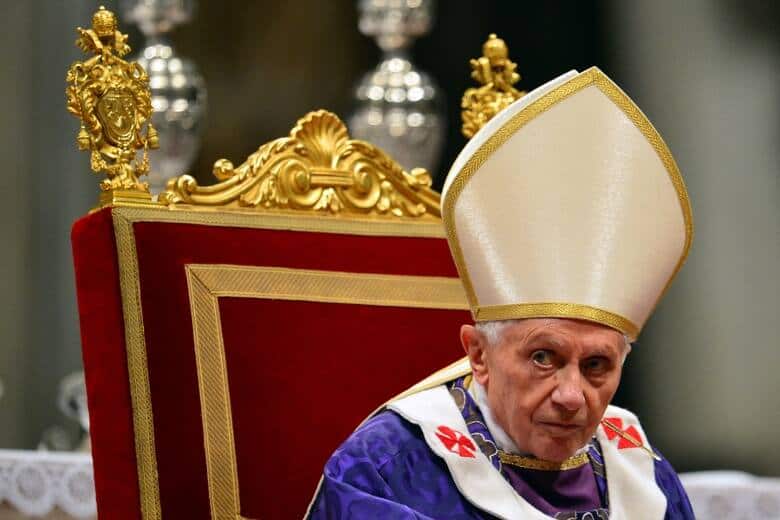 The death of the former pope caused a stir around the world on Thursday.

“As the German pope, Benedict XVI was for many, and not just in this country, a special church leader,” Scholz said on his twitter account, also calling him “ combative personality” and “intelligent theologian”.

United Nations Secretary General Antonio Guterres hailed the memory of the ex-pope who died at the age of 95, praising in a statement his “tenacious commitment to non-violence and peace”.

“His powerful calls for solidarity with marginalized people everywhere and his exhortations to narrow the growing gap between rich and poor are more relevant than ever,” the UN chief stressed.

In a tweet, the head of European diplomacy Josep Borrell said that his “sympathy goes to the global Catholic community around the world and to the Holy See”.

“Benedict XVI will be remembered as a theological leader striving for a synthesis between faith and reason and his efforts for world peace and justice,” he tweeted.

The President of the European Commission, Ursula von der Leyen, recalled that Benedict XVI had “sent a strong signal with his resignation”. “He saw himself first and foremost as a servant of God and his Church. When his physical capacity diminished, he continued to serve, through his prayers”.

Ex-Pope Benedict XVI was “a giant of Faith and Reason”, as well as “a great of History that History will not forget”, reacted the Italian Prime Minister Giorgia Meloni.

British Prime Minister Rishi Sunak said on Saturday he was “saddened” by the death of Benedict XVI, also saluting the memory of a “great theologian”.

“I am saddened to learn of the death of Benedict XVI. Pope Emeritus Benedict XVI. He was a great theologian whose visit to the UK in 2010 was a historic moment for Catholics and non-Catholics in our country,” the British leader tweeted.

I am saddened to learn of the death of Pope Emeritus Benedict XVI.

He was a great theologian whose UK visit in 2010 was an historic moment for both Catholics and non-Catholics throughout our country.

My thoughts are with Catholic people in the UK and around the world today.

Spanish Socialist Prime Minister Pedro Sanchez also hailed the memory of Benedict XVI, “a great theologian who is dedicated to the service of others, justice and peace”.

Portuguese President Marcelo Rebelo de Sousa, a devout Catholic, expressed his “deep dismay” upon hearing the news of the death of Benedict XVI, who visited Portugal in 2010.

“Throughout his eight years of pontificate, Pope Benedict XVI has remained a symbol of stability and of the defense of the values ​​of the Catholic Church: love of neighbour, solidarity and support for the poorest and most vulnerable. and the importance of forgiveness and reconciliation,” said the Head of State in a message published by the official website of the presidency.

“The world has lost one of the greatest theologians of the 20th and 21st centuries, a close collaborator of Saint John Paul II”, his Polish predecessor in the Vatican, declared on Twitter the head of state of the country traditionally attached to the Catholic faith.

Macron hails his efforts “for a more fraternal world”

French President Emmanuel Macron paid tribute to him by hailing the efforts of the former pope, who died on Saturday, in favor of a ” more fraternal world”.

“My thoughts are with the Catholics of France and the world, bereaved by the departure of His Holiness Benedict XVI, who worked with soul and intelligence for a more fraternal world”, tweeted the head of state.

My thoughts go out to Catholics in France and around the world, bereaved by the departure of His Holiness Benedict XVI, who worked with soul and intelligence for a more fraternal world.

Pope Emeritus Benedict XVI -born Joseph Ratzinger-, whose resignation in 2013 took the whole world by surprise, died on Saturday at the age of 95 in the monastery in the Vatican gardens where he had retired.

Emmanuel Macron, who like his predecessors maintains a regular dialogue with the main religions established in France, was received on October 25 at the Vatican by Pope Francis, for the third time since he entered the Elysee. in 2017. The interview was largely devoted to the war in Ukraine.

He also spoke about the end of life with the successor of Benedict XVI, fiercely opposed to euthanasia.

Emmanuel Macron, who plans to make the end of life the major societal reform of his second five-year term, assured that he did not want to “preempt the debate”, which he considered “sometimes simplified”.

Fr 2018, he had traveled to Rome to receive his title of canon of honor of the Basilica of Saint John in Lateran, which is the cathedral of the bishop of Rome, therefore of the pope.

This symbolic distinction automatically belongs to the French head of state, a tradition that dates back to King Henri IV, even if the Gaullist Georges Pompidou and the socialists François Mitterrand and François Hollande did not come to take possession of it.

The same year, he delivered a remarked speech at the Collège des Bernardins in Paris, at the invitation of the Conference of Bishops of France (CEF). He then declared that he wanted to “repair” the “link” between the Church and the State, “damaged” in particular since the adoption of homosexual marriage in 2013, and called on Catholics to invest in public affairs. /p>

Prime Minister Élisabeth Borne for her part hailed on Twitter the memory of Pope Emeritus Benedict XVI, “a man of thought and a great theologian of Christianity”, addressing her “thoughts to all Catholics in France and around the world”.

Former President of the Republic Nicolas Sarkozy noted that this “tremendous theologian, whose thought and writings will irrigate the life of the Church for a long time”, was the last pope “to have reserved an apostolic visit to France”. , when he hosted it himself in 2008.

Declaration of the Presidency of the Conference of Bishops of France in reaction to the death of Pope Emeritus Benedict XVI.⤵️ pic.twitter.com/Q8Mm87x2U6

“All my thoughts are with the Catholics of France and the world, who are today losing a brilliant theologian, a pope of great humility, courageous and respected”, tweeted for her part the leader of the deputies National Rally and former candidate for the Elysée Marine Le Pen, while the president of the Les Républicains party Eric Ciotti considered that he had “marked the history of the papal seat with his erudition”.

La Garde pays tribute to him

The Pontifical Swiss Guard paid tribute to former Pope Benedict XVI who died on Saturday at the age of 95, saying that serving him had been a great honor.< /p>

“It is with deep sadness that we have learned the news of the death of our pope emeritus, Benedict XVI,” said in a message posted on social networks the oldest army in the world, created in 1506 by Pope Julius II. and staffed by a total of 135 men.

“It has been a great honor for all of the guards who have served during his eight years as head of the Catholic Church to be able to serve in his service. Requiem”, adds the message.

To be a member of the Swiss Guard, you have to be Swiss , practicing Roman Catholic, single, between 19 and 30 years old and at least 1m74 tall.

The 135 guards undertake to ensure the safety of the pope for at least 26 months. They live in a barracks in the Vatican, a UNESCO World Heritage Site since the 19th century.

Benedict XVI, the first German pope in modern history, took the world by surprise in 2013 when he announced his resignation after eight years of pontificate, an unprecedented resignation in six centuries.

Vladimir Putin saluted the memory of the former pope on Saturday after his death, hailing a “defender of traditional Christian values” of which the Russian president also wants to be the apostle.

“Benedict XVI was an eminent religious and state figure, a convinced defender of traditional Christian values,” he wrote in a message of condolence to Pope Francis, broadcast by the Kremlin.

“I will forever have fond memories of him”, added the Russian head of state.

Vladimir Putin poses as a defender of conservative values, constantly denouncing the moral decline of the West, due, in particular, to the acceptance of LGBT communities.

Before the master of the Kremlin, the patriarch of the Russian Orthodox Church Kirill had also saluted the memory of the former Pope Benedict XVI, a defender of “traditional values”. “The unquestionable authority of Benedict XVI as an eminent theologian has enabled him to make a significant contribution to the development of inter-Christian cooperation, to the witness of Christ in the face of a secularized world and to the defense of traditional moral values”, indicated the patriarch in a statement.