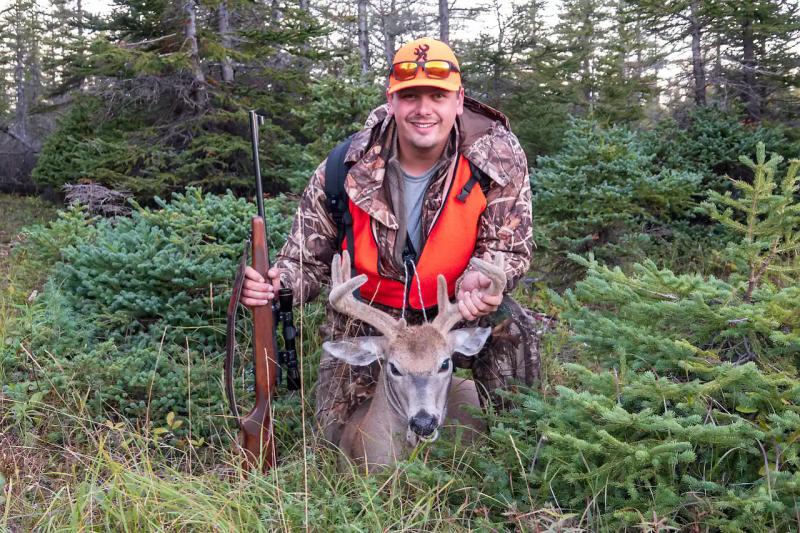 Hunting fever is starting to infect more and more deer hunting enthusiasts because the 2022 season will soon begin.

Indeed, as of October 1, in certain areas, crossbow and bow hunting will be permitted. According to the most recent figures provided by the Ministère des Forêts, de la Faune et des Parcs, the deer population in Quebec is around 325,000, including Anticosti. Specialists estimate that the population has doubled in 30 years. Nature has helped with the warmer winters we have experienced and all the measures put in place in the management plans have paid off. Winter is the deer’s worst enemy, especially the spring storms that stretch the season. At this time of year, deer don't have many reserves to last long. They must

have access to food easily and as quickly as possible. Conversely, too early a winter can lead to the death of many adult males who have not had time to regain their strength after the intensive period of the rut, when they do not feed. I witnessed this situation a few years ago, at the Kenauk outfitter, in Outaouais. Winter set in suddenly with heavy snowfalls making it extremely difficult for the weakened males to travel. The following spring, many mature deer carcasses were discovered. It took three seasons before this population segment reappeared in the territory.

Last year, according to figures from the MFFP, more than 52,862 deer, including those from Anticosti, were harvested during the hunting season. Reported figures indicate that nearly 135,000 hunters practiced deer hunting and nearly 20,000 hunters purchased a second license. On the mainland, the harvest exceeded 46,000 animals, which is within the average of the last five years.

Yes, if we rely on these figures and the fairly mild winter we experienced, we should have a good chance of success this fall if the weather conditions are favourable. But, we must always remember that the density of deer is not the same everywhere in Quebec. While some areas are literally overflowing, others cause several hunters to wonder. They note that the majority of deer harvested are young, including several young males. This situation leads many hunters to claim from the MFFP that the measure on the restriction of the legal size of antlers (RLTB) applies in many areas. Currently, this program is in effect in zones 6 north and 6 south only. The United for Wildlife group is campaigning in favor of extending this measure to regions such as Gaspésie, Bas-Saint-Laurent and Outaouais. This would bring the herd to a more acceptable level in their opinion.

This situation proves beyond any doubt that the situation of deer is not the same throughout Quebec. In areas like 7, deer abound. It is not uncommon to see more than one come to bait during a hunting trip. A very important debate is currently taking place in this file. There is no doubt that changes will be made.

While waiting for the time of the opening of the hunt to arrive, amateurs must continue to be well prepared.

For baiting, with the exception of salines, the law provides that it is possible to do so between September 1st and November 30th. We are in it. Apples and carrots will certainly end up near the salt flats. Remember that if you use corn and turkeys come on your bait, you are not allowed to hunt them.

Like many other species, the deer is subject to a management plan that will be in effect until 2027. It is the responsibility of the experts of the MFFP, who have only one goal, which is to ensure the sustainability of the species. , in order to increase the chances for hunters to have a quality hunt. You can totally disagree with the decisions that are taken at certain levels and challenge certain measures. /p>

If approached with documented and verifiable facts, they will listen. There is only one way to go about making changes through the management plan.

Within this framework, there are tools to set standards that respond better to the reality of certain regions. You should know that it is in Quebec that we have developed the most precise methods for monitoring deer populations. It's what lets us know where we are.

So, while you wait for the kick-off to be given, keep dreaming of the magic moment when you will see your game that you have seen appear repeatedly on surveillance cameras.

Some dispute the use of these technological tools. Personally, I consider that they contribute to maintaining the dream.