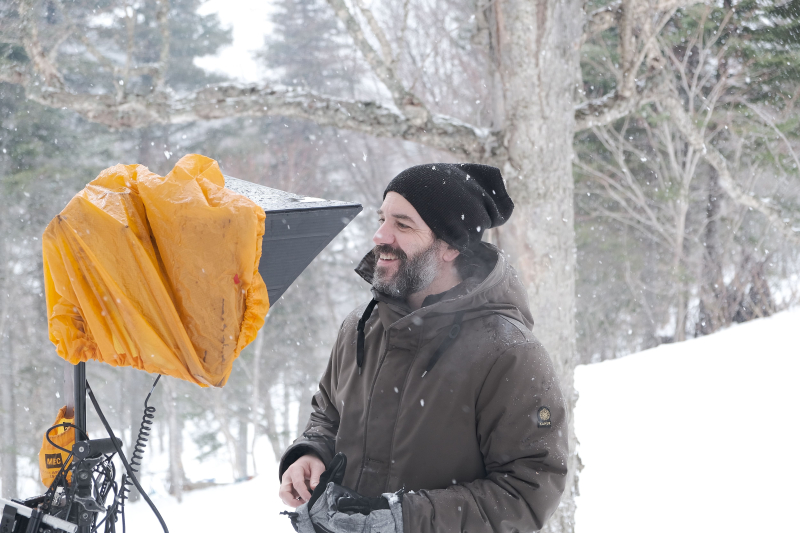 Gabriel Allard has found an original way to produce his first feature film, The Descent, a psychological thriller that he co-wrote with his wife, actress Catherine Bérubé. Rather than take the usual route of asking for help from public bodies, the director decided to finance the project independently, selling half of his film's shares to private investors.

It is therefore thanks to some 34 people who agreed to invest in their film that Gabriel Allard and Catherine Bérubé are launching this weekend in Quebec theaters this psychological thriller that they have been carrying at arm's length for more than a ten years.

The original idea for The Descent (Snow Angel, in the original English version) germinated in the mind of the director in 2012, during a road trip in the west.

“I always wanted to make films, but I thought it was unreachable”, confides the one who has already worked as a croupier in another life.

“We flirted with the institutions a bit at the beginning, but I did not see the way. It's my first movie. Nobody knows me and I make a kind of film that institutions don't usually fund.”

Actress Catherine Bérubé plays the main role of the film, in addition to having co-scripted and co-produced it.

Then, drawing inspiration from his American models — filmmakers Christopher Nolan, Robert Rodriguez and Darren Aronofsky, who shot their first films independently — , Gabriel Allard had a flash.

“I wondered what was the point of owning the whole film if no one saw it,” he explains. This is where I had the idea of ​​surrounding myself with a community. So I sold half of the profit shares of the film to private investors — 34 in all. We split the other half between all the members of the film crew. So we end up with almost 80 owners of the film, which means that it has a chance of being propelled further by word of mouth. Obviously, my technicians were paid less because we had a more limited budget. But if the film manages to make money, everyone will.”

Shot in about twenty days in Saint-Octave-de-l'Avenir, in Gaspésie, The Descent stars Catherine Bérubé as an ex-professional snowboarder who experiences difficult times after causing a fatal accident by drinking and driving.

< p> “The film's script has changed a lot over the years, explains Catherine Bérubé. A few years ago, while visiting filming locations in Gaspésie, we heard on the radio the story of a family who was decimated in an accident caused by repeated drunk driving. It really marked us. I was pregnant, too. This news item inspired us and allowed us to bring depth and purpose to our film. It got deeper than just a thriller.”

The Descent (Snow Angel), in theaters since January 20.