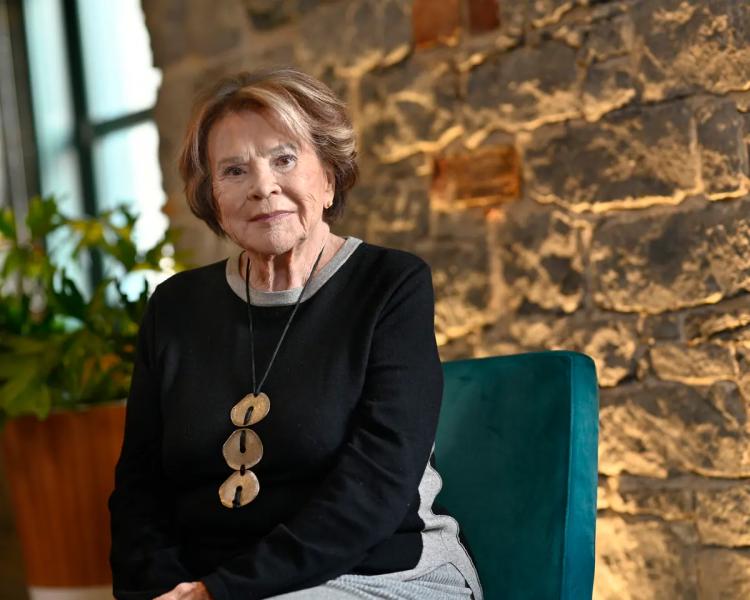 Janette Bertrand has fought all her life against inequalities between men and women, a fight fueled by her “anger” towards injustices.

Pioneer , pioneer and revolutionary in her own way, she could have laid down her arms a long time ago, but she continues with unusual energy, at 97, to want to understand, raise awareness and make things happen, society taking a long time to evolve despite the notable improvements, we must admit.

Her quest for women to be treated on an equal footing with men, so that they are no longer harassed, assaulted and abused, so that they can dispose of their bodies, revealed a benevolent and determined humanist.&nbsp ;

As early as the 1950s, in the Courier du Coeur that she wrote for 17 years, Janette Bertrand tackled head-on a host of taboos, talking about sexuality, rape or illicit love.

“It takes a lot of love for human beings to tell them: 'evolve my boyfriend, do something. Yes, since you were born it's been like that, but maybe there are others ways of doing things,” said Janette Bertrand in an interview with the QMI Agency.

In her shows “Parler pour parle” and “L'amour avec un grand A”, presented on Radio-Québec (today Télé-Québec), she welcomed marginalized and marginalized people to her table, giving a voice to homosexuals, transsexuals, people with HIV or to violent men, among other subjects.

To pay homage and salute the rich journey of this early feminist, Léa Clermont-Dion presents in the documentary “Janette et filles” the woman, the mother and the wife, but also the journalist, the screenwriter, the actress , the author, the feminist and the psychologist, so many hats on over the last seven decades.

This documentary full of archival footage does useful work and is “a duty of memory” for the director, who also spoke with the heirs of Janette Bertrand, who are Chris Bergeron, Régine Bertrand, Gabrielle Boulianne-T, Martine Delvaux, Claudia Larochelle, Kim Lévesque Lizotte, Noémi Mercier and Guylaine Tremblay. The latter says that Janette “did Quebec foolish”.

“I really realized that the new generations had to become aware of his legacy, of his heritage, because we have a short memory,” said Léa Clermont-Dion, who also co-directed the documentary “I salute you bitch: misogyny in the digital age”.

Chris Bergeron, a trans woman who is Vice-President of Inclusive Creativity at Cossette, laments in the documentary “the slowness of evolution” and adds that ” it would have taken 10 Janette Bertrand”.

“Yes, there is progress, but you don't change the mentality of people [quickly]. There are still women who consider themselves “nannies”, who say “I don't know anything”, who think they are inferior, and there are men who consider themselves superior. That is very difficult to change, it's education, it takes years to change,” said Janette Bertrand, who did not want “Love with a capital A” to end. < /p>

“I didn't leave. At one point, the director died over the holidays. […] Then I was told that there would be no more drama. The vocation has changed and I no longer had a place.”

Janette Bertrand is impatient to celebrate her 100th birthday, she who continues to “prove” her worth to her late father day after day. Between now and March 25, 2025, she has no shortage of projects and her need to “occupy her mind” will not run out of steam.

She has more than one book in the works and has just signed a song for Lynda Lemay, “Parle-moi”, dealing in particular with violence in a couple.

The documentary “Janette et filles” is presented on Wednesday, October 12, at 8 p.m. , at Télé-Québec.