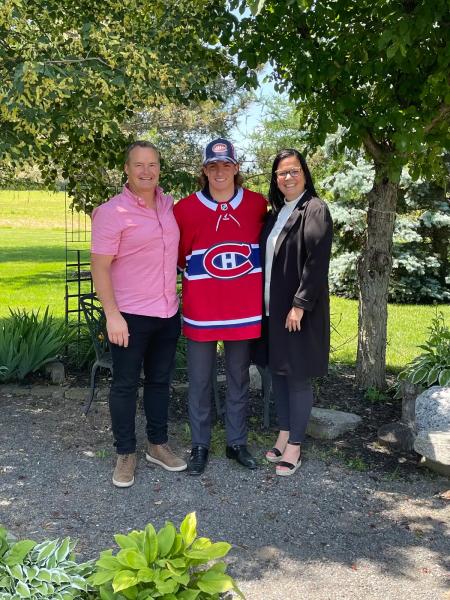 The family of Miguël Tourigny realized a dream on Friday when the Montreal Canadiens drafted the defender from Victoriaville, in the 7th round, with the 216th selection.

< p>“The feeling of pride is indescribable,” said his father, Stéphane Tourigny. We are just beginning to realize it. I was in shock. Montreal is the team that I have followed since I was young. Bettman in his first two years of eligibility. The Tourigny family, which owns a dairy farm with nearly 700 animals, did not travel to Montreal to avoid another disappointment.

The critics motivated Miguël to redouble their efforts, according to the father.

“Because of his greatness, Miguel always had to work,” he said. He never had it easy. Ever since he was a peewee, he's been told he wouldn't get far in hockey. He has always worked hard. He has unshakeable confidence. He's really strong mentally.”

The 20-year-old's mother, Valérie Desrochers, spoke of her son's resilience.

“Her determination is her greatest strength,” she said. He has a temper at work. His journey will never be easy. He never gave up […]. We always had hope for him. When we heard his name, the dream finally became a reality.”

“Heart bigger than his body”

According to those close to him, Miguël Tourigny has everything he needs to stand out, despite the pressure of the Montreal market.

“Miguel thrives on pressure, noted his father. The more important the match, the more he is in the game. He likes challenges. He has a purpose and he wants to show everyone that his greatness doesn't matter.”

“He still has energy and he will continue to surprise you, he predicted. His heart is bigger than his body. It looks like he has two engines, since he never stops on the ice.”

In addition to seeing Miguël shine with a harvest of 31 goals and 80 points, the Tourigny had the pleasure of seeing the youngest of the family, Jordan, a 16-year-old defenseman, win the President Cup and play an important role with the Shawinigan Cataractes.

“The two brothers are very close, mentioned Stéphane. They call each other after each game to give each other advice. What they have given us this year is beyond our expectations. It's been a milestone year for our family.”

Miguël Tourigny is taking part in the Canadiens' development camp until July 13.

Miguël Tourigny is struggling to realizing what is happening to him

After being a supporter of the Montreal Canadiens younger, Miguël Tourigny is still struggling to realize what has just happened. The Victoriavillois was selected in the 7th round by the Habs on Friday.

Ignored during the last two drafts, the defender did not travel to Montreal to attend the event.

“I was surprised [to have received the call from the Canadian], said Tourigny. When I realized what had just happened, I was really happy […]. When I was younger, I watched every Canadian game. I was a huge fan. Wearing the Canadiens jersey, I found it a little funny, since it seems that I don't fully realize it yet.”

“It's certain that being ignored motivated, but I'm not someone who needs more motivation,” added the 20-year-old athlete. I run on pressure. I can't wait to get started and I'm sure it's going to be fine.”

Aware of the chance he has to wear the colors of the Canadiens, the one who scored 31 goals and 80 points the last year wants to remain accessible to fans.

The 5-foot-8, 170-pound defenseman calls his confidence his greatest strength. This allowed him to overcome obstacles.

“I really have confidence in my abilities, mentioned Tourigny. I'm fast and I play bigger than my size.”

In Montreal, he wants to draw inspiration from Martin St-Louis and Francis Bouillon.

“St -Louis is similar to mine, even though he was not drafted, he pointed out. I watched it a lot when I was younger. It's the same with Francis [Bouillon]. I talked to him [at development camp]. He told me not to give up, to keep working and that good things were going to happen.”

Tourigny, who stands out for the offensive aspect of his game, wants to take advantage of the development camp of the Canadian to improve his defensive game and become a complete player.