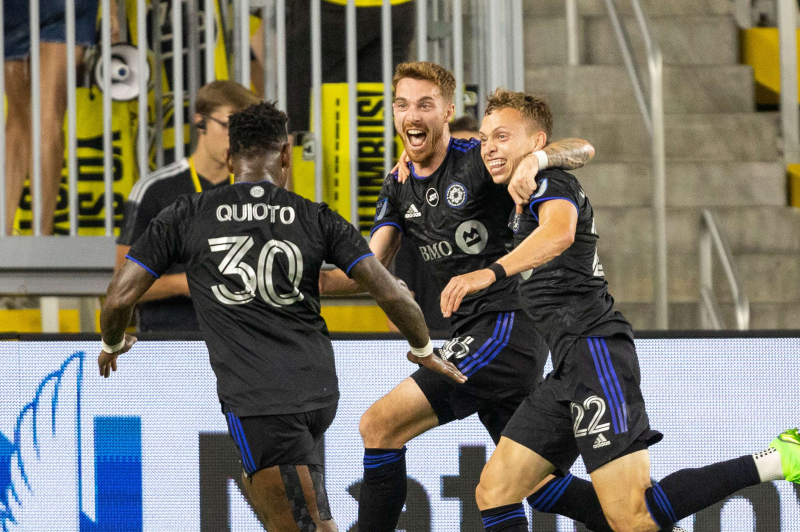 Whether it's the passing of Jason Di Tullio or the euphoria of a surprise victory over the Columbus Crew, CF Montreal has had an eventful week. Saturday will conclude his grueling streak of three games in eight days, against Inter Miami CF.

Wilfried Nancy held a final training session on Friday before welcoming the Florida team to Stade Saputo. The beautiful sunny day at the Nutrilait Center contrasted with Di Tullio's funeral that morning, which several players attended.

Mathieu Choinière was one of the great beneficiaries of the teachings of the assistant coach, who sadly died of cancer on July 29. The Quebecer learned from “La Grinta” from the former defender, and the whole team showed it on Wednesday in Ohio.

“He did everything with passion, with desire and love. […] That’s what he meant to me, Jason,” Choinière explained at a press conference before the field exercise.

CF Montreal showed these qualities to beat the men in yellow 2-1. They signed the first victory in their history in Major League Soccer by drawing from behind in the 87th minute.

“The victory against Columbus is the victory of a whole group. […] I use the whole group and I want us to stay with this mentality for the whole season, “said Nancy, very happy to see her men evolve with confidence and humility, her two words of 'order.

The ship's pilot effectively rotated his complement to keep his legs fresh. Against Miami, however, he will be without the side Zachary Brault-Guillard, who is injured in the ankle, but who does not suffer from “nothing too serious”.

Nancy also kept the identity secret. of the goalkeeper who will be sent in front of the net. Sebastian Breza found the cage against the Crew after leaving it for three meetings with James Pantemis.

“We try to recover as quickly as possible, we know that it comes back quickly, supported Choinière. We have just finished with a victory, it is always easier than to finish with a defeat. Morale is very good.”

A territory to protect

The Bleu-Blanc-Noir is enjoying the best performance abroad in its history, with a 6-4-2 record. That's similar to his home record, which is 6-4-1. The next duel will be important in order to make it clear to the other clubs that Stade Saputo is an impregnable fortress.

“There are no easy games. All games are difficult, especially at Stade Saputo. Now the team has set high standards, so people expect us to win every game. I hope we will win them all, but it will be difficult all the same,” admitted Wilfried Nancy.

“It was important to put them within nine points [of us]. He is a direct contender for the playoffs. Now, we must not rest on that, we must use it to go and win on Saturday against a good Miami team, and the same, leave them behind us and earn as many points as possible, ”summarized French defender Rudy Camacho, who is hoping for a third consecutive full house at Stade Saputo.

The opponent in points

< p>Things are looking up for Inter Miami CF, who won their last game 1-0 over the San Jose Earthquakes and dramatically snatched a draw from FC Cincinnati.

Last month, however, he won just one of his seven matches, including a friendly against none other than FC Barcelona on July 19. The Spanish giants won 6-0. It wasn't very good for confidence, let's say, and Miami then lost a shutout to New York City FC.

Montreal has yet to meet Miami this season, except in preseason games. Their last official duel therefore dates from July 31, 2021, when the Floridians won 2 to 1 at Lockhart Stadium. The club seems much better this season, however.

“It is a team that has nothing to do with the past, which has done a lot of recruitment, warned Friday the head coach of the Blue-White-Black, Wilfried Nancy. They have strikers who are super interesting and they have midfielders with speed and technical qualities.”

Voted MLS's best player of 2020, Alejandro Pozuelo did some damage against CF Montreal while playing for Toronto FC. The Spaniard will be in his hands again with Miami.

Pozuelo has been more discreet in the last two seasons, but Wilfried Nancy sees a more involved player since his move to Florida.

“He's coming to a new environment, so he's trying harder,” the coach said with a smirk. He runs a lot more, I feel him more involved. In Toronto, he decided to leave. He did what he had to do there.”

A lack of goals

It's surprising to see Miami eighth in the Eastern Conference, with as many points as Charlotte FC and Cincinnati, as the team shows the second worst differential in the section. Former England defender Phil Neville's squad have scored just 27 goals and allowed 37.

Of those goals, 15 were scored by Leonardo Campana and Gonzalo Higuain. The latter also scored a hat trick against Cincinnati a week ago.

Precisely, Campana and Higuain might not to be dueled in Montreal due to injuries. The first, shot in the leg, came off in the 22nd minute against the Earthquakes. The Argentinian veteran was replaced in the 72nd to treat his jaw.

Neville had declared that Campana was “definitely probably on the sidelines”, while he had a “major doubt” on Higuain's state of health. The coach will have to be creative.