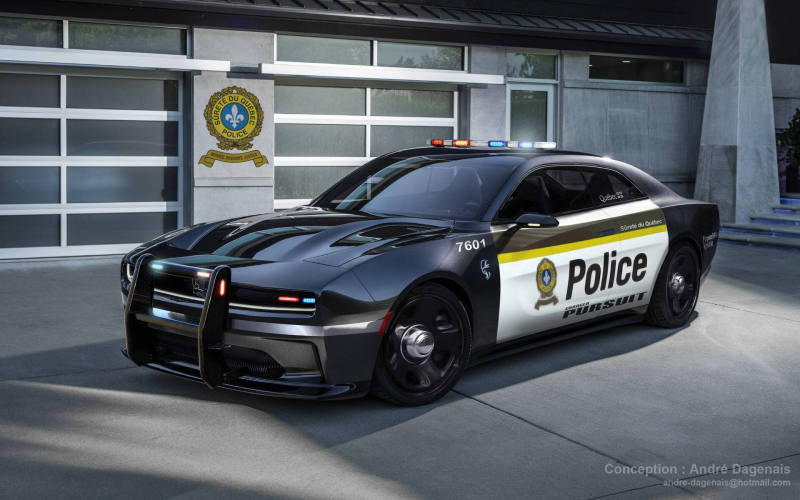 Just to put my brain on sleep mode, this week I watched Ambulance, a typical Hollywood crime movie with unrealistic scenes, stunts, guns and supermen. It destroys an incredible number of police vehicles, all in pursuit of a simple ambulance, which seems as powerful as an Audi R8…

Obviously sponsored by Stellantis, which supplied dozens of Dodge Chargers, Dodge Challengers and Chrysler 300s for production, this film even features a Ram 1500 TRX belonging to the Los Angeles police. Enough to make the few Ford Explorer Police Interceptors look bad, because you also had to see a few SUVs there. Note, we could also have chosen Durangos (in patrol car version), but I imagine that the film also had to be more than a big publicity stunt for Stellantis.

That said, while watching the film, I suddenly realized that the North American police car was at the end of the road. Because indeed, today's peacekeepers only have access to the Dodge Charger as a true executive car, Ford and Chevrolet having both discontinued the Taurus and Caprice a few years ago. Remember in passing that the last Chevrolet Caprice was only sold in the United States and derived from the Holden Commodore, an Australian car.

With the abandonment of the Charger announced for the end of 2023, police forces will obviously only have SUVs to patrol. We can thus imagine that a greater part of the production of Chargers assembled at the Brampton plant in Ontario will be devoted to the Charger Pursuit. This one is loved by the police and, thanks to its intimidating appearance, I think fits more with the representation of law enforcement than Ford's latest Taurus. The various police forces might want to store cars for years to come, as we did in 2011 following the abandonment of the Ford Crown Victoria Police Interceptor.

Naturally, Dodge strategists aren't commenting on the future of the police car within the brand, though they do admit that the Charger Pursuit accounts for a sizable percentage of that model's sales, particularly in Canada. It must be said that if here, the sales of this large sedan are almost symbolic, it is different with our neighbors to the South, who procured more than 78,000 units in 2021 (compared to 1,924 in Canada).

So what could be the next patrol car? A next-gen electric Charger Pursuit? Admit that the idea is not bad. Especially since the concept unveiled earlier this year seems to have a good chance of being produced. And then, it would be surprising if Dodge agreed to cede this piece of the cake to Ford, which sold more and more Explorer Police Interceptors and F-150s, while Chevrolet bet on the Tahoe. Unless of course other brands get involved. For example, Tesla, which started selling vehicles to municipalities, but did not offer real “police” versions of their models.

Thing Certainly, the authorities will continue to have special automotive needs. And because cities need to lead by example, it would be surprising if they only bought big, gas-guzzling SUVs, however appealing to those who use them. Would the electric vehicle therefore be a probable avenue? You can be sure.