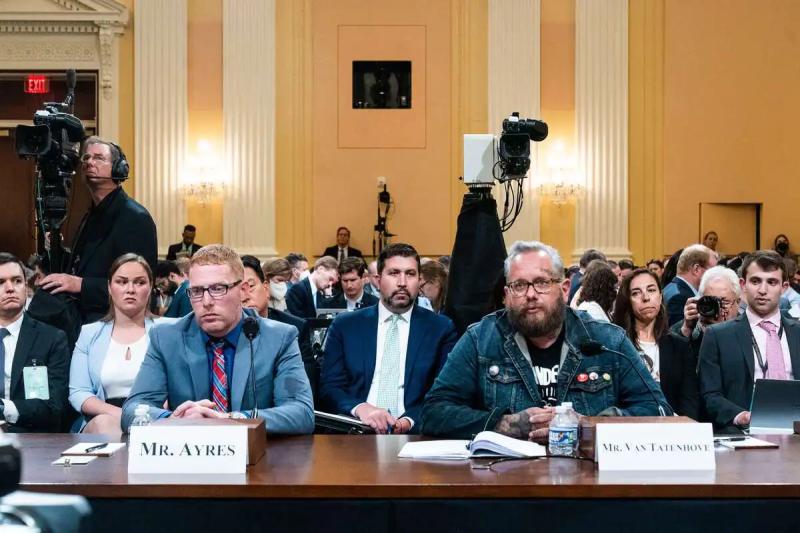 The far-right coordinated the assault on the Capitol after a message from Donald Trump perceived as a 'call to arms', a group of elected officials investigating how the former president claimed on Tuesday tried to stay in power.

This parliamentary committee – seven Democrats and two Republicans repudiated by their party – detailed during its seventh hearing the pressure exerted by the billionaire , from the 2020 presidential election until his supporters stormed the Capitol on January 6, 2021.

At the heart of the investigators' presentation, a tweet from the ex-businessman dated December 19, 2020, in which the billionaire calls on the crowd to gather in the American capital on the day of the certification of the victory of Joe Biden.

“Big demonstration in Washington on January 6th. Be there, it will be crazy, ”wrote the tenant of the White House on Twitter, his favorite megaphone at the time.

“This tweet has served as a call to action, and in some cases a call to arms, for many of President Trump's loyal supporters,” said Democratic lawmaker Stephanie Murphy.

Supporting videos and montages, the commission detailed how radio hosts, youtubers and conservative personalities immediately relayed Donald Trump's call. One of them even mentions the possibility of “attacking” the Capitol.

Donald Trump's message also “electrified and galvanized his supporters, especially dangerous extremist groups like the Oath Keepers, the Proud Boys and other racist and white nationalist groups ready to fight against the government”, accused the President. elected Democrat Jamie Raskin.

The group of elected officials has indeed detailed how these radical groups coordinated themselves upstream of the ” January 6” via encrypted messaging and online forums. And exchanged regularly with a close friend of Donald Trump, Roger Stone.

“They may not like to call themselves militias, but they are,” said Jason Van Tatenhove, a former Oath Keepers spokesperson. “It's a violent militia.

Arrived in the American capital with paramilitary equipment, the Oath Keepers and the Proud Boys quickly interested federal prosecutors.

Several of their members have been indicted in recent months for “sedition”, a very rare charge that involves conspiring against the government or any of its laws.

The House Committee also received testimony on Tuesday from a repentant Trumpist, who entered the Capitol grounds on January 6, 2021 and has since lost his job and been forced to sell his house.

“It changed my life, and certainly not for the better,” said Stephen Ayres, who went to hug several police officers injured during the storming of the Capitol at the end of the hearing.

The “January 6” commission finally wanted to sweep away the possibility that Donald Trump could have been manipulated by anyone in his maneuvers to overturn the result of the 2020 election.

“President Trump is a 76-year-old man, not an easy child to impress,” assured elected Liz Cheney, one of the few Republicans to have agreed to sit on this commission.

“Donald Trump cannot shirk responsibility by being deliberately blind,” she warned, at a time when some are calling for the former president to be charged for his post-election maneuvers.

The Republican billionaire , who openly flirts with the idea of ​​running for president in 2024, vehemently denounces the work of the commission, calling its members on Tuesday “politicos” and “thugs”.

His party, which he still controls with an iron fist, has already promised to bury the conclusions of this commission if he keeps them tors came to take control of the House of Representatives during the midterm legislative elections in November.