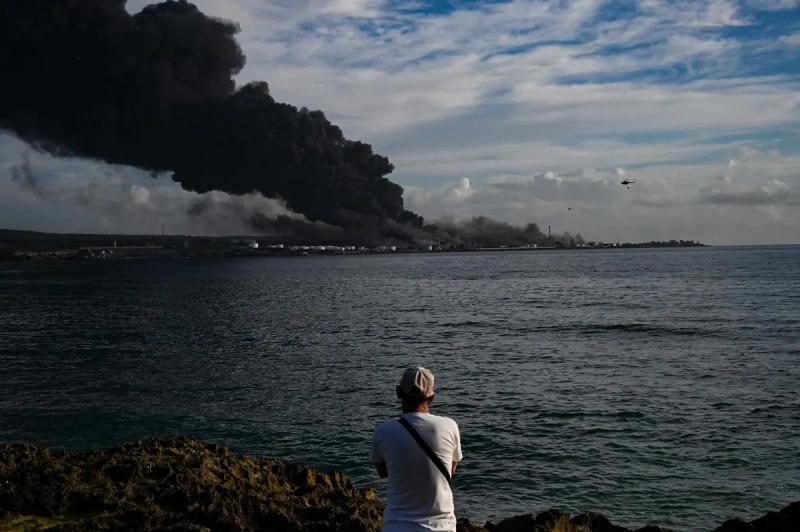 The fire that broke out on Friday at an oil depot in Cuba is still out of control, and authorities announced on Monday that a third tank was destroyed by the flames.

The disaster began on Friday evening when lightning struck one of the eight tanks of the depot located in Matanzas, 100 km east of Havana, which contained 26,000 cubic meters of crude oil, or approximately 50% of its maximum capacity.

Riddled with fire, the cylindrical structure exploded in the early morning of Saturday, spreading the flames to a second tank containing 52,000 cubic meters of fuel oil.

Despite fire soldiers perched on cranes and helicopters performing multiple drops of water, this second tank in turn tore after an explosion on Sunday at midnight, forcing an emergency evacuation.

“And what we feared has happened” with the burning and destruction of a third tank containing crude oil, Matanzas Governor Mario Sabines said on Monday in a video posted on the presidency's Twitter account.< /p>

The situation is “very complex” with “three tanks on fire” and a “fairly large” fire area, the governor said, without specifying how many thousands of cubic meters this third tank contained.< /p>

Mr Sabines said that “teams” of rescue workers from Cuba, Mexico and Venezuela “are being positioned” to spread the fire extinguishing foam, which “may take some time”.

< p>According to a latest report, one firefighter died and 16 are still missing, while 26 people are hospitalized, five of them in critical condition.

The relatives of the missing met with President Miguel Diaz- Canel and received the assistance of doctors and psychologists.

“My son did his duty, he went” to the fire, the mother of a firefighter told AFP in tears. 19-year-old who was on the oil depot on Saturday morning when an explosion blew the first tank on fire.

On Sunday, four planes from Mexico and Venezuela landed at the resort town of Varadero , 40 kilometers northeast of Matanzas, with oil firefighting specialists and tons of extinguishing foam on board. trice.

This tragedy comes three months after the explosion in Havana of the Saratoga hotel caused by a gas leak, which left 46 dead, including a Spanish tourist, and more than 50 injured.