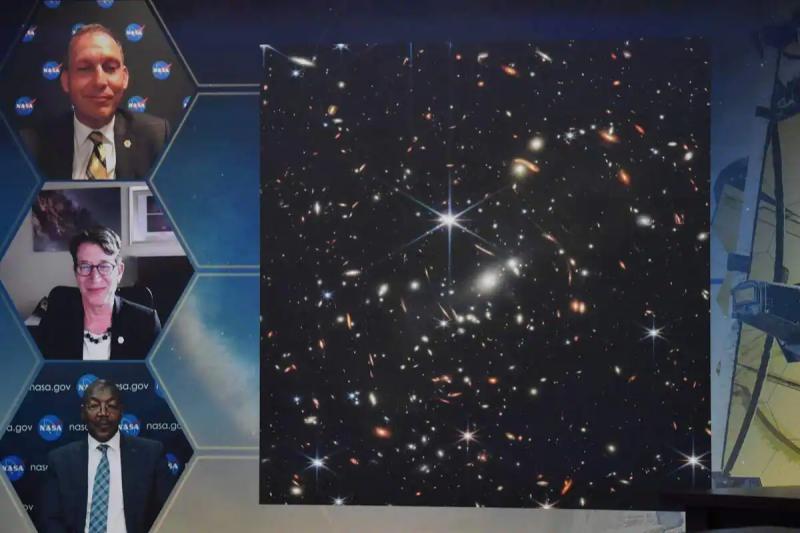 Nasa unveiled Monday the deepest infrared image of the Universe ever taken, a sumptuous snapshot showing the first galaxies formed shortly after the Big Bang, more than 13 billion years ago .

This first scientific and color image of the James Webb Telescope marks a “historic” day, greeted President Joe Biden during this event held at the White House, six months after the launch into orbit of this space telescope, the most powerful ever conceived.

This photograph is “the deepest and clearest infrared image ever taken of the Universe to date,” NASA said. Light breaks down into different wavelengths, including infrared, which the human eye cannot perceive, unlike James Webb designed for this purpose.

The image shows thousands of galaxies.

This is a snapshot of the galaxy cluster SMACS 0723 which, acting as a magnifying glass, also revealed very distant cosmic objects behind it — an effect called gravitational lensing.

Other images are to be revealed by NASA on Tuesday, at an event eagerly awaited by all space enthusiasts.

Their publication marks both the culmination of many years of waiting for astronomers around the world, and the beginning of a great scientific adventure. James Webb should allow experts to study the Universe in a completely new way, including the first galaxies, as well as exoplanets, in search of the possibility of life outside our solar system.

James Webb was launched at Christmas from French Guiana by an Ariane 5 rocket. Resulting from a huge international collaboration, and in the works since the 1990s, this jewel of engineering stationed 1.5 million kilometers from the Earth cost about $10 billion.