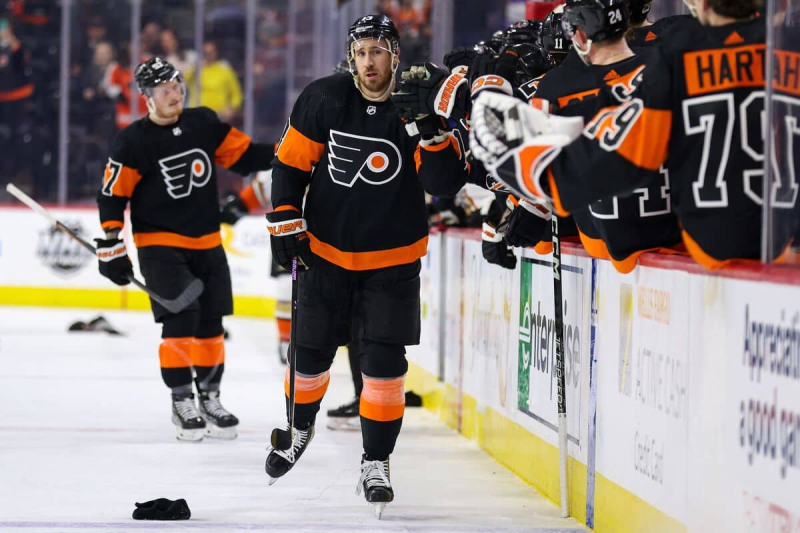 Kevin Hayes scored his first career hat trick on Tuesday in Philadelphia as the Flyers continued their rise in the standings with a 5-2 win over the Anaheim Ducks .

Hayes scored his 11th, 12th and 13th of the campaign, the last in an empty net. For John Tortorella's club, this is the eighth win in its last 10 outings, this time against the worst team overall in the National Hockey League (NHL). The last rank giving access to the playoffs is only five points away.

Rasmus Ristolainen finally ended his drought, with the defender scoring his first of the campaign in victory. For the Flyers, it was the ninth goal behind, more than any team so far.

Rookie Samuel Ersson earned his fifth straight win in front of the goal Pennsylvania team by virtue of a performance of 25 saves. Only Adam Henrique and Frank Vatrano beat him. He is posting a perfect 5-0-0 career record so far, having seen action in seven games since the start of the campaign.

Bombarded with 38 shots, Antony Stolarz did what he could by yielding four times. The substitute can almost say that he enjoyed a short evening of work since he had been tested at least 40 times in his three previous starts since the beginning of December.

The Maple Leafs help the CH

The Maple Leafs gave the Montreal Canadiens a good hand by coming from behind to win 5 to 4 in overtime against the Florida Panthers in Toronto.

William Nylander played the heroes by scoring the equalizer in the third period, then that of victory during the extra period.

The Habs currently hold the Panthers' first pick in the upcoming draft . The Florida team was 10th in the East after their game on Tuesday.

Filip Gustavsson was dominant against the Washington Capitals, allowing the Minnesota Wild to sign a third straight victory, this time 4-2 at Saint Paul.

The 24-year-old Swede made 34 saves, only being beaten by Martin Fehervary and Dylan Strome. These two goals, however, allowed the local favorites to take the lead, but Jared Spurgeon and Jonas Brodin replied each time.

Spurgeon also added a second goal late in the second period, then Joel Eriksson Ek put the finishing touch in an empty cage.