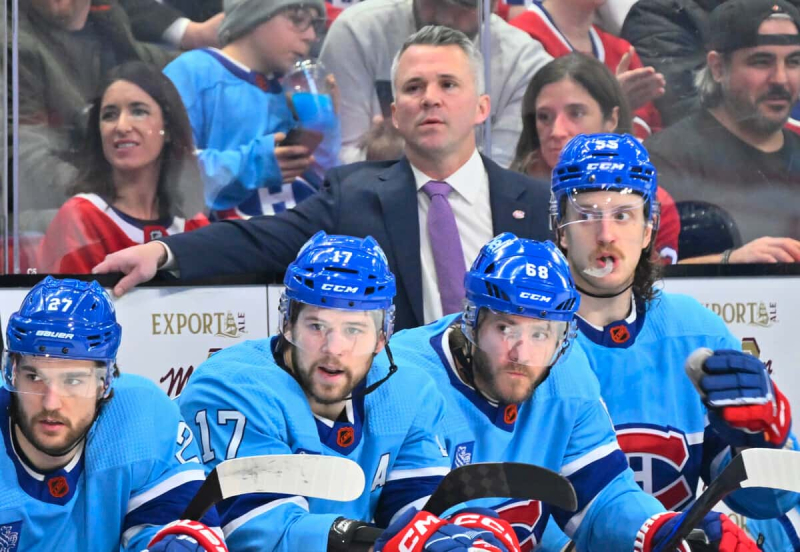 For the past few days, Martin St-Louis has been focusing his speech a lot on the importance of having a solid foundation. A foundation which, in the case of his team, goes through defensive play.

We could see an improvement in this aspect of the game against the Rangers and the Blues. However, Monday night, while the Seattle Kraken were at the Bell Center, the Habs returned to their good old habits. At least, during the first twenty.

Led by two assists from Yanni Gourde, the visitors scored three unanswered goals during that period. Three goals that were enough to allow them to fly to Buffalo with a 4-0 win. Nothing was going well for the Canadian, especially around the goal defended by Samuel Montembeault.

Multiplying turnovers and unable to sustain the pressure, the St-Louis troops spent most of the engagement in their zone. So much so that after 10 minutes of play, Martin Jones had only received one shot. Against 14 for Montembeault.

At least the Montrealers were able to pull themselves together when they returned from the locker room. The Kraken continued to direct shots (41) towards Montembeault, but the majority came from less dangerous angles.

So the good news is that the foundation did not crumble . She simply cracked.

In attack, despite a few scoring opportunities, it was not the duo of Nick Suzuki and Cole Caufield that sparked the most, but the Dadonov-Evans-Armia trio. It's the third time in as many games since St. Louis brought them together that the three players have given life to their teammates.

With this loss to the Kraken, the Habs close the first half of his season with a record of 16-22-3. His 35-point tally gives him last place in the Atlantic Division and 27th in the NHL.

Not bad where we saw him before the start of the season.

+ Jake EvansHe didn't have much success in the face-off circle (42), but his intensity allowed his line to be the most threatening in the Montreal camp. On several occasions, he applied effective pressure on the ball carrier. the puck, forcing him to rush in – Mike Hoffman This was discussed in the What We Noticed section Hoffman played like someone who didn't want to be there He was on the court for the Kraken's first two goals Two goals in his first four appearances of the match (just like for Drouin and Pezzetta)

It was Cayden Primeau who occupied the position of assistant to Samuel Montembeault. The Rocket goaltender was urgently recalled late afternoon to replace Jake Allen. The Canadiens veteran suffered an upper body injury during practice on Sunday. His condition will be assessed daily.

Slow start to the game

The Habs had an atrocious start to the game. Halfway through the first period, when the Kraken scored their second goal, the shots board was 14-1 for the visitors. When Cole Caufield fired the team's third shot, with less than 3:30 to go, the crowd cheered in derision.

Hoffman without his boots< /strong>

In the morning, announcing that Mike Hoffman was returning to the roster after watching the previous two games from the catwalk, Martin St-Louis indicated that he wanted the see “bring your work boots”. That was probably too much to ask of him. Hoffman lacked combativeness all evening. At one point, he slowed down and let the puck go in the neutral zone when he saw Will Borgen approaching. On another occasion, he applied a check without putting too much conviction.

Goals by the ton

The Kraken at home and the one away from Seattle seem to be two separate teams. On opposing rinks, Dave Hakstol's squad filled the opposing net (4.32 goals per game). In four games since the start of their journey on Canadian soil, the Kraken have scored 22 goals (five in Edmonton, five in Toronto, eight in Ottawa and four in Montreal).