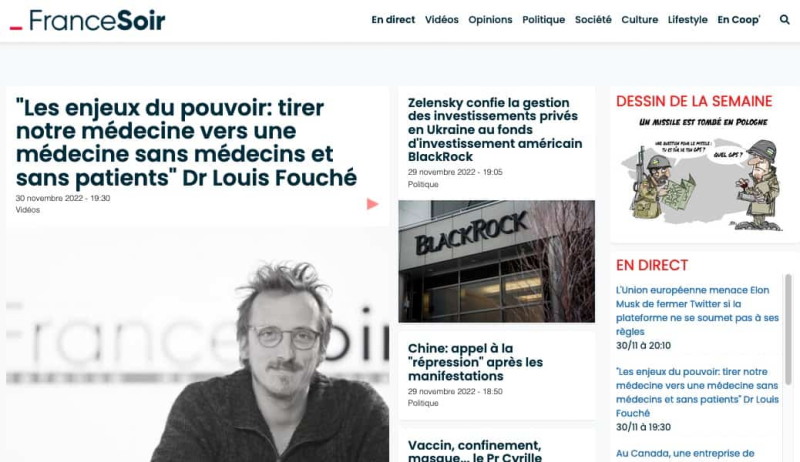 The FranceSoir site has lost its status as an online press service, which notably gave it the possibility of benefiting from public aid and tax advantages, the Joint Commission for Publications and News Agencies said on Wednesday. press (CPPAP).

Meeting Wednesday morning in plenary committee, the CPPAP “decided not to renew the recognition of online press service to FranceSoir. The decision will be notified to the publisher soon,” she told AFP, confirming information from the specialist letter Mind Media.

According to the institution made up of state representatives and press publishers, “FranceSoir no longer met all the criteria” set by decree to obtain this qualification.

Contacted by AFP on Wednesday evening, the management of the site was not available to react immediately.

The online media, which has retained the name of a prestigious daily newspaper that has disappeared, is accused for several years to relay conspiratorial theses, in particular concerning the Covid-19 epidemic.

But it had managed to maintain its status as a political and general information site during the last review of the CPPAP in April 2021. “Proof has been provided of the presence of two permanent journalists and four freelancers”, underlined the Ministry of Culture at the time.

At the time, “the administration was cautious”, fearing not to have sufficiently solid arguments to put forward in the event of an appeal by the site, a source familiar with the matter told AFP.

The basis for this new decision was not immediately known.

The withdrawal of this status entails in particular the loss of a tax exemption on donations, a reduced VAT rate, and complicates the process of obtaining a press card.

In September 2021, Google cut FranceSoir's access to its advertising network, thus depriving it of part of its income, after the broadcast of a report on France 2 entitled “Fake News, the money machine”. A few months earlier, Google had already delisted FranceSoir from its Google News service and suspended its YouTube channel.

In early September 2022, the Paris Commercial Court dismissed Shopper Union, the publisher of the FranceSoir site, from its action against Google.