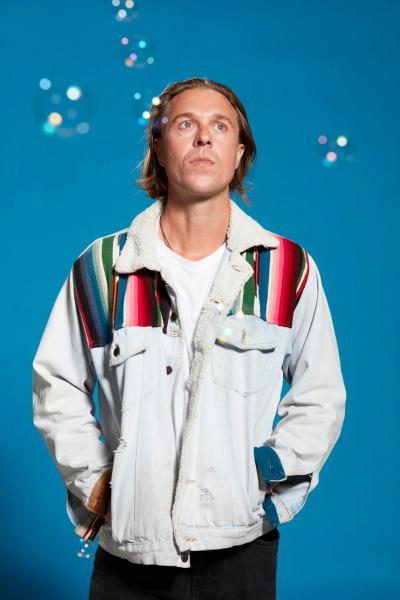 More than 450 shows in a dozen countries, shared stages with big names in indie music – including Mumford & Sons and Ben Howard – and nominations for the ADISQ Gala and Juno Awards: the career of Montreal indie band The Franklin Electric is the envy of many bands. Meeting with its enigmatic leader, Jon Matte.

A businessman father from Quebec and a rebellious mother from New Brunswick – a gift of Irish roots – made Jon Matte a bilingual Quebecer raised mainly in English.< /p>

Born in Trois-Rivières, he lived in Ottawa and Hudson, in Montérégie. It was at the age of 16 that he left the family cocoon to go to study in Montreal; a bustling metropolis that would both fuel his love for the arts and become his adopted city.

It was from his parents that he inherited, at a very young age, his love for music. On the maternal side, rich of ten brothers and sisters almost all amateur musicians, in particular.

“I remember my mother and her brothers and sisters who played music in the evening after supper, all around the piano”, evokes the one who performs with his group at the Cigale festival in the bay of Beauport, this evening. “My grandmother played the dobro, my grandfather the violin, my mother was on the piano and my other uncles and aunts almost all had guitars. I come from a large Irish family of musicians who jammed by ear.”

Funny fact: when his mother, director of the Hudson choir and a very persuasive woman, convinced his father to sing in his group, the latter discovered the voice… of an opera singer! Like what a certain musical talent is common in the family.

If he was sensitive to music very early on, the singer admits that he had a badass mentality when he was a teenager. A way to protect himself, he who had difficulty managing his emotions and sharing his fears.

“The arts have helped me a lot”, continues the one who quickly immersed himself in literature, while discovering a spiritual side that would never leave him. “In high school, I read Jean-Paul Sartre in the library at dinner time while the others smoked outside. I've always had this spiritual side and this desire for a journey of self-discovery.”

This is what will be largely discussed during our conversation: the initiatory journey, letting go to see where life will take us, openness to opportunities, encounters, and instant creation. . The way of seeing the life – and the art – of the musician who wanted to co-produce all his albums.

From the first album This Is How I Let You Down released in 2014 at This Time I See Itlaunched in 2021, the indie music group recognized for its powerful and gentle pieces addressing various existential themes has accumulated several successes on four different albums.

The songs I Know the Feeling, You And I, This is How I let You Down and After All are particularly popular with fans who, in addition to know all the lyrics they sing at the top of their lungs in concert, are visibly transported each time by the sensitivity, openness and vulnerability of Jon Matte.

Jon Matte and his band at Franklin Electric are set to release a fifth album in late fall. Not bad for this producer who became a musician despite his fear of singing and who “had no idea how to be a front man” in his early days.

All those years of “searching for a sound” have paid off, even if the road has been littered with small detours.

“I think I lost myself at some point in my career,” he said. At one point, I got distracted by wanting to be this and that so we could become a big indie band. I think I had lost a little of what is intimate. I eventually went back to that.”

And it works, according to viewers in communion with the long-haired singer when he indulges in piano, guitar or trumpet on stage in often packed halls.

His inspiration, the singer who remains discreet about his age (even if we manage to place him at the dawn of his forties) always finds it during a very specific moment or event.

< p>Several pieces of this new opus were thus written in San Pancho, Mexico, during unique moments during the pandemic period. If it is possible that it is called The Story of You, it is because Jon Matte says he is at a time in his life when he practices letting- go. To watch, from afar, what life has planned for him.

“For this new album, I needed to be honest, to push back the barriers of what I believed was good, to push everything back,” he adds. The best place to be is when you don't know where you're going and you trust that you're going to make discoveries. The universe guides you and things begin to appear.”

He describes this work as a simple and artisanal album, because it is composed of songs that are special to him and that he himself imagined with more of freedom. The music videos for the first two singles (Bordeline and Rabbit Hole which are already broadcast on the platforms) were also shot in Mexico.

In a very simple, honest and artisanal way, as Jon Matte wanted. < /p>

►The Franklin Electric is in concert at the Cigale festival on August 6 in Beauport Bay. cigalequebec.com

►The group will also be in Gaspé on August 12 at the Festival musique du bout du monde and at the International Balloon Festival of Saint-Jean-sur-Richelieu on August 13. More dates here: preste.ca/spectacles/thefranklinelectric

« I played music on cruise ships. »

« I played the trumpet for 5 years in the street. »

“I like to create in chaos and make albums at the last minute, in a hurry. »

If Jon Matte has traveled a lot, he would not see himself living anywhere but Montreal. A city that he finds unique for its culture, its relationship to art, its quality of life and everything that is fluidly intertwined with it, such as English and French.

The metropolis is also filled with memories for the one who, after leaving the small town of Hudson where he grew up, found himself at Vanier College at 16 to study music.

“I I stayed for a year, but I failed because the program was too rigid and did not suit my personality at all, he confides. Instead, I went to learn real life by playing music everywhere and discovering the entrepreneurial side of the job, which we weren't taught at school either.”

It was all the same at Vanier College that Matte found a childhood friend also from Hudson: a certain Patrick Watson (the popular and deliciously eccentric singer and musician, yes!). While Matt went to public school and Watson went to private school, that didn't stop the two young music lovers from bonding and participating in activities together at the Hudson Community Center, while Matte must have been 12 or 13 years old.

“I remember that we both wanted the role of Oliver Twist in a show that was staged there, but that it was Patrick who got the role, relates Jon Matte. I still blame him (laughs).

The two musicians, who were to become two important figures of indie music in Montreal, remained friends thereafter. Enough for Jon to live for a year in Watson's loft about ten years ago and the time of a few participations of Jon on stage or on album.

“We started at the bar Le Château du lac de Hudson both, adds the one who confides to work slowly on a second song in French (after It's more like before). I really enjoyed watching him and I asked him for advice. Our paths crossed and it was a beautiful coincidence.