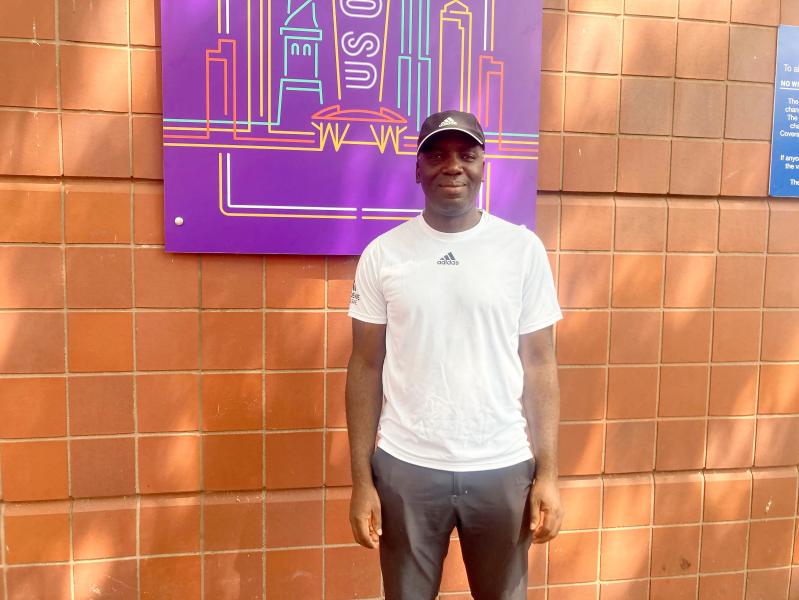 NEW YORK | Sam Aliassime learned the basics of tennis on the courts that belonged to the hotel where his father worked. “Obviously it was for the customers, not for the children. But we were invited to play! »

Between Mr. Aliassime and tennis, there is a love story that has lasted forever. However, in his native Togo, it is soccer that generally makes hearts vibrate.

“In Africa, we were a strange family because we played tennis, he said. told in the Journal.I played soccer, but I was not terrible. When I realized that I would not go far, I converted to tennis. »

He thought he would make a career out of his racquet. As a player, of course. It didn't work, but he made his mark in a different way.

Because, some four decades later, Mr. Aliassime now owns the academy that bears his name, at Club Avantage de Quebec. And he is also (or especially?) the father of Félix, the eighth player in the world, whom he coached until he was 14 years old.

The story of Sam Aliassime is one of resilience and passion. When he arrived in Quebec 26 years ago, there was no indication that he would succeed in carving out a place for himself in this discipline.

Coach in Togo, he offered his help to the Quebec and Canadian federations in his early years in the country, he said. His offer was refused.

However, when he flew over Montreal for the first time, Mr. Aliassime thought he had found a match for him.

“It was afternoon,” he explained. From the window, I saw the grounds of Stade Jarry. As soon as we landed, I looked everywhere for them. »

Mr. Aliassime and his son Félix, during the Holidays in 2016.

Coach in the parks

Little by little, the Quebecer from adoption discovered that his new compatriots also played tennis in the parks.

While his wife at the time was at work, he went there snowshoeing in hand, his little Malika in his stroller. It was there that he began to give free lessons to young people in Henri-Julien Park, in the Montreal borough of Ahuntsic-Cartierville.

“That's why today, I will never say no to a child. At my academy, if you want to play, you have your place,” he said.

His talent came to the ears of a player, who asked him if he could to replace her in Longueuil, where she was giving lessons, while she was on vacation.

In Quebec despite him

Since then, Sam Aliassime has never stopped coaching. His path also took him through Repentigny, before he ended up in Quebec to straighten out a club in difficulty.

“I arrived in Quebec in spite of myself. I didn't want to go there. At the time, there weren't many immigrants,” he pointed out.

But his bosses accepted, and, little by little, Félix's father settled in Quebec. A city he would never leave today, he said with a smile.

It was there that he began to train his younger brother more seriously. And that he started working with Jacques Hérisset and Jacques Bordeleau, before they sold their academy to him four years ago.

By buying the tennis school, the coach wanted to establish his mentality there. The same he instilled in his son before he left for the National Training Center in Montreal, at age 14.

Félix Auger-Aliassime during his Monday game at Flushing Meadows.

Today, the Aliassime Academy not only welcomes local players, but also from abroad. Happy with the structure he has put in place, he believes that it could outlive him if he decides to get involved in new projects.

He has plenty of ideas the head. He wants to give back, happy and proud of the path he has traveled. He will travel to Africa in October to set up a project he calls Team Africa, which aims to support players from the continent through to university.

A plan to which Félix could also contribute financially when it is launched, because he “believes in it a lot”, pointed out Mr. Aliassime.

“Each time I do a project, he embarks. When he bought his house in France, he told me that there were a lot of rooms and that it was for my young people [from the Academy], if they needed it, ”said the father proudly. .

Back through the front door

When Félix was 14, his father, Sam Aliassime, wanted him to attend the US Open. For him to see the best players in action, in the hope that they will inspire him to achieve the goal they had both set.

One morning , Mr. Aliassime departed from New Jersey with the aim of arriving at the box office at 5 a.m. It only opened at 9 a.m., but he preferred not to take any risks.

Except that to his surprise, there was already a long line of amateurs who were also waiting for the opening. And when he finally arrived at the box office, around noon, another bad news awaited him.

“The remaining tickets cost $250,” he says. And me at that time, I was no longer working. My club had just closed. So I said to myself: “OK, I sacrifice myself, I will buy tickets for my two children”.

But he promised himself one thing: the next time he attended the US Open, someone was going to open the door and drive him in his place.

“There, we had a great reception in the final. They opened the door for us! »

This time too, Sam Aliassime entered through the front door, with his accreditation around his neck on which we read: “Accompanying by Félix Auger-Aliassime”.

He is on vacation in New York, after an intense summer coaching young people from his academy.

But when you are also passionate about tennis, it is difficult to stay away from the courts. Especially when it is our own son who trains there.

The Journal therefore met Mr. Aliassime last Saturday. Leaning on one of the railings of the stairs leading to the stands, he watched his very first protege while he hit balls.

Sam Aliassime therefore claims to be here “as a dad and as a coach”. Because analyzing Félix's practices from a height allows him to have a different perspective from that of his trainer, Frédéric Fontang.

“I place myself higher and I see things that we do not perceive in the field. I share my vision with Fred and it allows us to keep an eye on Felix's progress. »

And how is it going, precisely, this progression of the sixth favorite in New York? Because dad has always been clear: he believes in his son's chances of winning a Grand Slam, of one day being number 1 in the world.

“He is progressing well. He does things at his own pace. But I'm very happy,” says Sam Aliassime.

“My wish is that when we take stock at the end of his career, he will be fine. Boris Becker, he won Roland-Garros at 17 and today he is in prison. Because sometimes, when we want too much, we take shortcuts.

“This is not good. When it comes [the titles and the first rank], it will be the right time. »