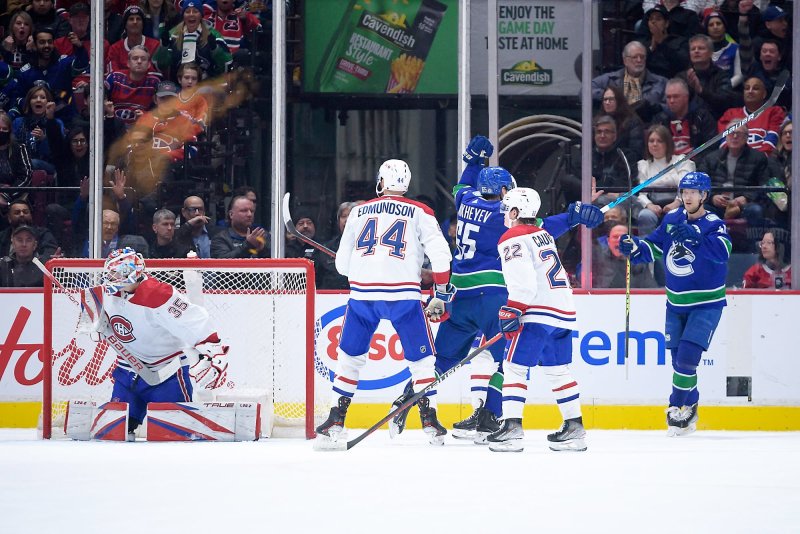 VANCOUVER | The Canadiens delivered another game that wasn't meant for people with heart problems last night at Rogers Arena.

In a game where the tide turned sideways on several occasions, the visitors lost an offensive festival 7-6 in overtime to the Vancouver Canucks.

Elias Pettersson gave the victory to the locals by taking advantage of a fall from defender Michael Matheson in the territory of the Canadian. The Swede jumped on a loose puck to beat Samuel Montembeault with a nice fake.

It was an exciting game as hell. First, the Canadian took a four-goal lead in the first period. He was in full control of the game as he took advantage of the largesse of goalkeeper Spencer Martin.

Then the Canucks responded with five straight goals. The rout began with Connor Garland's goal late in the second period.

The small forward took advantage of a blunder by young Habs defenders to break the ice.

In the last minutes of the match, we witnessed a real rolling fire where the two teams exchanged three goals in the last five minutes.

“It was a pretty weird game,” said Martin St-Louis. We could have trailed 2-0, but Sam kept us in the game.

“It’s not easy to play against teams when you are up 4-0. They will surely cheat more. We weren't able to score the fifth goal.

Once again, his players showed character in the third period. It came after a St. Louis timeout following the Canucks' fifth goal.

“I liked the way they battled. It was quite an emotionally demanding game. In my opinion, there are so many more positives than negatives in this meeting.”

Once again, Samuel Montembeault gave the your to his team. In the opening minutes of the game, the Canucks buzzed around his cage.

He made at least three big saves on threatening shots. These gave confidence to a private defensive brigade of Quebecer David Savard.

For the occasion, the order of the pairs was turned upside down a few hours before the match. In particular, we saw a duo made up of Arber Xhekaj and Jordan Harris.

For a second game in a row, the head coach Martin St-Louis lost a big chunk along the way. Sean Monahan left the game in the second half.

He had to step down due to a lower body injury. It is possibly the same injury that almost caused him to miss his return to Calgary last week. We had seen him move with a protective boot before the duel against the Flames.

This injury had the effect of giving more minutes to the other center players in the third period. Christian Dvorak and Jake Evans took turns with Juraj Slafkovsky and Josh Anderson.

In this attacking festival, we were treated to Michael Pezzetta's first goal of the season. The striker played his best game of the year so far. He showed better commitment even though his playing time was not generous. It must continue in this vein.

Andrei Kuzmenko is one of the great stories in the NHL since the start of the season. We saw a fragment of the extent of his talent during this meeting. The Russian scored the equalizer late in the third period.

A home game or almost

For this duel, we saw several Canadiens jerseys in the stands. Moreover, the crowd seemed in favor of the visitors especially in the first period. It's crazy how the Habs are still popular in Western Canada.

Juraj Slafkovsky got the bells rung in the first period by defender Luke Schenn. The first-round pick of the Canadian got up painfully. On the sequence, Arber Xhekaj came to his defense. After some medical examinations, the Slovak was able to return to the game.

The Canadian had to manage without the services of David Savard. The Quebecer was injured in the upper body. We haven't been able to find out if it was an injury that the defender had been dragging around for some time. It's unclear if he'll be able to play in Seattle tonight.