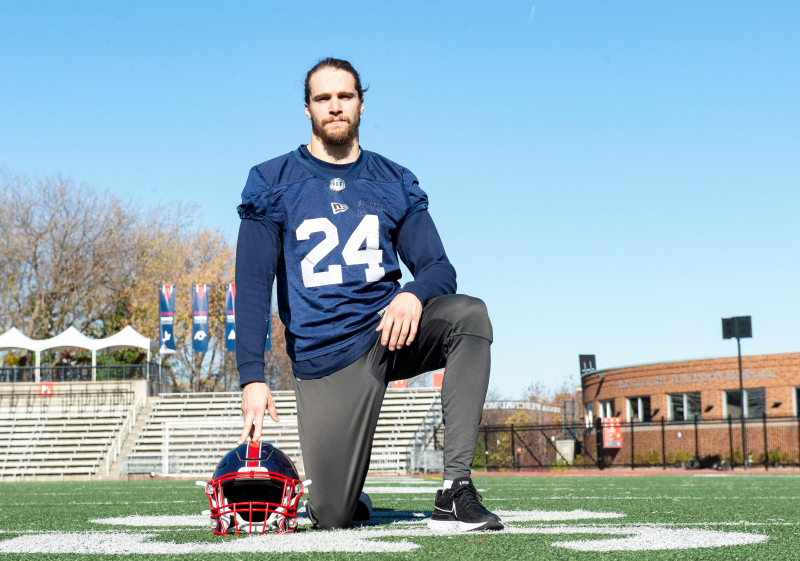 Marc-Antoine Dequoy had a rather atypical career in football. Today, he is firmly in the saddle with the Alouettes. It's as if a place was waiting for him despite the obstacles he had to overcome along the way.

In Sunday's Eastern Semi-Final against the Hamilton Tiger-Cats, flashes of his youth will come to mind as he looks towards his father at Percival-Molson Stadium.

As a child, he attended games alongside his father, who had season tickets in the south stands, behind the Alouettes bench. M. Dequoy will take his place near this section on Sunday.

The Alouettes have always been part of the family.

I have pictures of me at training camp when I was little, says Marc-Antoine.

“To play for the Alouettes today and to be a starter is a dream come true.”

Dequoy started playing football at the age of 5 years old. He rose through the ranks until the end of high school.

Then, in first year at Cégep André-Laurendeau, he put his favorite sport aside.

“I thought I didn't like football anymore,” he says.

“I had been playing since the age of 5 and I did not know if it was by habit or by passion. This one-year inactivity rekindled my flame for football. »

The following year, Dequoy headed for Cégep Montmorency, where he was given the chance to show off his skills.

He only played five games, but that was enough for his coach, Paul Eddy Saint-Vilien, who was joining the Université de Montréal Carabins coaching staff the following season, to recommend him to Danny Maciocia. .

“ Marc-Antoine did not look like most players from the college ranks, recalls the head coach of the Alouettes.

“ C he was a slender man endowed with great speed. But he did not have a big football background. It was at university that he learned the position of defensive back. »

This is probably the reason why Dequoy repeats two or three times in the conversation that he does not was not known at that time.

“We saw the athlete in him,” Maciocia continues.

“We thought we would bring him to our house and work with him. We said: so much the better if it works.

“But if we had been asked if he would be where he is today, we would probably have said no. But we had seen the potential and he did the rest. »

His first season with the Carabins brought him his lot difficulties.

” We spent our time changing his position, says Maciocia.

” After his first year, I told my assistants that we were going to invest in him, to do it playing in one position, that he would be shown patience and confidence.”

Dequoy became a cornerback, and that's where his career took off.< /p>

” I went from an obscure player to a player who was chosen on the Canadian university all-star team, he continues.

” My journey may seem atypical, but in a certain sense, we all have irregular paths. »

L last year, in his first professional season, the Alouettes made him their safety.

That again required an adjustment.

“ When I was a cornerback, I stayed on the periphery, he explains.

“There, I work in the deep areas. The pursuit angles are different.

His speed serves him well. Viewers may have noticed, Dequoy looks like all games.

“Like I say, he's still in the picture! Maciocia says.

“There are not many players who run fast like him. He is capable of playing the ball like a wide receiver from a height of 6 ft, 3 in. It covers a lot of ground.

“Sometimes when the opponent throws the ball and you watch it go from the sidelines, you think you got screwed. But Marc-Antoine is still there. He's like a hockey goalie. He's the last line of defence.

“He's a good player and I'm sure he's going to be even better in the next few years. “

At 28, Dequoy has just been named the Alouettes' Canadian Player of the Year.

” I'm very happy about that, but when you play a team sport, the first objective is to win a championship,” he says.

“  It's always nice to see your work being recognized, especially among the pros. Hopefully that translates to the field for Sunday's game.”

Dequoy respects the Tiger-Cats, but he wants to win at all costs.

” We lost against them in the semi-finals last year, he recalls.

“We feel like we haven't done our job. We are really approaching Sunday's game very seriously. We are driven by a feeling of revenge. ”

The Alouettes have won two of their three games against the Tiger-Cats this season, but the results have been tight.

Both teams are playing better than in the first half of the season, with the Alouettes posting a record of six wins and three losses in the second half.

The Tiger-Cats have won their last four games.

Finally, Dequoy will have a thought for his mother, who died in September.

“  His departure was very difficult to accept and it still is, he says.

“My mother was my biggest fan. I play for her, it's my way of honoring her. ”