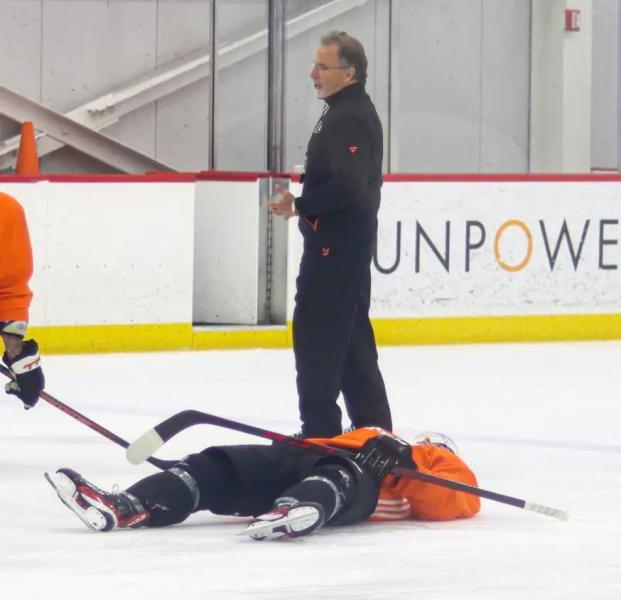 Mikael Huchette made two observations at the Philadelphia Flyers training camp: John Tortorella is not the tyrannical coach that is often described from the outside and… he will no longer be able to never criticize the training of Patrick Roy!

Freshly arrived from the camp of the Flyers, who had offered him an invitation after he had not been drafted for the second year in a row, Huchette had a smile split until ears when he recounted his experience to the Quebec media on Wednesday morning.

And it's not because Tortorella spared him, quite the contrary! A photo showing him lying full length on the rink, while Tortorella gives instructions to the players in the background, has gone around the web.

“It was the hardest practice of my life for real! It was hell, I couldn't stand up at the end. All the guys were freaking out. I was seeing black at the end, it was crazy steep! I'm telling you guys, it doesn't look good! I will never be able to complain about Patrick's practices again, that's for sure,” he said, laughing.

Because in the end, he only gets positive things out of this experience. The 19-year-old center player not only got to taste Tortorella's medicine on the ice but also, and above all, got to know him outside the ice surface.

According to him, his presence in Philadelphia will only be positive for an organization that has been treading water for a few seasons. From the short time he has been in the team environment, Huchette has already felt that he was putting his stamp on his new team.

“His practices are intense and it has to be done his way, but it works. The Flyers, I think it was more relaxed before and now they will be ready. He expects a big season even if they are not considered among the best teams in the league. I think it's good that he's tidying up.”

Huchette therefore returned to Quebec reinvigorated and motivated for the coming season. The Flyers offered him some tips to improve his skating, including some exercises to improve his hip flexibility, and he says he is ready to contribute with the Remparts.

“It was the best experience of my life. To be able to rub shoulders with guys from the NHL, you see that you are not that far away. […] We will have a big team in Quebec and my role will be more important. I have confidence in myself and I want to bring even more offensive. I want to have a great season with the guys.”