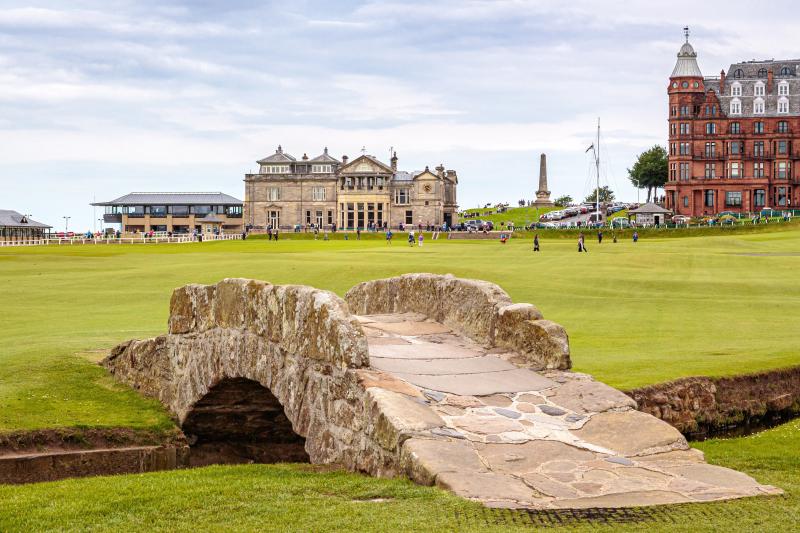 ST ANDREWS, Scotland | A $1 Million Question: Where is the holy grail of golf courses on the planet? On the shores of the North Sea in St Andrews or Augusta, Georgia?

The Old Course, the birthplace of golf, or the Augusta National, the cathedral of golf? When we ask the question, we receive no simple answer.

Both places are one of a kind. We must admit that to walk near the 18th hole on a splendid day in July when the bagpipes echo on the old stone of the buildings of the city and the North Sea stretches as far as the eye can see, it's enchanting and shivering.

But in the eyes of the greatest purists and the great stars of professional golf, the choice stops on the oldest public course in the world located in Scotland. Exactly where the sport was born.

In the mind of Tiger Woods, British Open champion at St Andrews in 2000 and 2005, there is no doubt about it. It is even his favorite course. An answer given on Tuesday that he immediately confirmed without even batting an eyelid.

This should not be seen as an affront to the legendary club of Georgia, his favorite playground, where he won five green jackets. Woods chose the Old Course because of the weight of history of the club founded in the 15th century, the 30 British Opens that have been played there, the golfers who have wandered there and the winners.

According to him, nothing equals this course which has stood the test of time. On each of his visits to the 18th, he immortalized his crossing of the Swilcan Bridge. In his office he still has this photo from his first visit in 1995.

“My first practice round, I couldn't believe my eyes how stupidly difficult this place was. I had played all the holes with the wind in the face. I didn't know where to hit on par 4, and suddenly everything changed. The pits were coming into play, the 'Tiger' told with a smile.

“Ingenuity has ensured that this course has stood the test of time against the best golfers. Despite the steady improvement of the plateau, it remains a big challenge. »

Jordan Spieth, meanwhile, mentioned the particular weather conditions of St Andrews as the main factor of resistance when the wind blows.&nbsp ;

Spaniard Jon Rahm believes that the holy grail of golf stands out for its history and its unique design.

“ Its history is very special. I don't think you can count many courses where there are only four individual greens, he noted of the seven greens sharing two flags. All of its shared fairways, all of its blind areas, and all of the varieties of shots possible to execute. This is the history and the very meaning of the sport.

“And the area around the first tee and then the 18th green is impressive.”

Full career or not?

According to the words of Bobby Jones repeated by Jack Nicklaus, who lifted the Claret Jug twice on the castle forecourt of the Royal and Ancient club, a true champion is one who manages to win on this course. Only five golfers have managed to do it more than once.

“It's a bit of a stretch,” said Rahm, 27, “but I get what he means. There is only a very small group of golfers who have won here. This helps to take their career to another level due to the uniqueness of this site. This course has a rich history.

At the other end of the spectrum, Rory McIlroy could not make a choice. For the Claret Jug champion at Royal Liverpool in 2014 and still looking for his first green jacket at Augusta, both paths are dear to him. Both deserve this title.

As for Jones' statement, he believes that very few athletes make up this select club. Which makes a triumph on this hallowed ground the greatest feat in one's sport.

“ There are several great golfers who have won the Open and who have not. won at St Andrews. But I think it's unfair to say that a career isn't complete without winning here. »

So, to determine your Holy Grail, the history and significance of the Old Course or the myth and perfection of the Augusta National?

Since the weekend, St Andrews has been packed with golf enthusiasts from all over the planet. The streets are as crowded during the day as the bars are at night. Golf shops line up like wax museums and houses of mirrors in Niagara Falls. The only small problem is that the kitchens of the restaurants have not yet arrived at the time of the Open with all the difficulties brought about by the pandemic. They mostly close before 9 p.m. when the sun hasn't set and the hungry scribes haven't finished typing on their computers. No big deal, there's always a way to grab a quick bite with a pint of Belhaven Best. A real nectar discovered during my first visit here in 2015. That said, the first typical fish and chipswas swallowed near 14th Alley on Monday. It is a tradition that should not be lost.

Jon Rahm wishes he could discover more of the small Scottish town. But if he had to walk around in his jerseys branded with the crests of his sponsors, he wouldn't be 10 feet out of his vehicle. “There are too many people. I would like to be able to discover certain businesses such as bookstores where I want to buy golf history books,” whispered the one who is timidly content to frequent restaurants in peace.

The equipment manufacturer Callaway has distributed a magnificent bag to its golfers. On the sides, there is the drawing of a young 15-year-old artist from St Andrews. Iona Turner drew what the city represents to her. There are colorful buildings, a bagpipe, the famous Swilcan Bridge and the Loch Ness Monster.