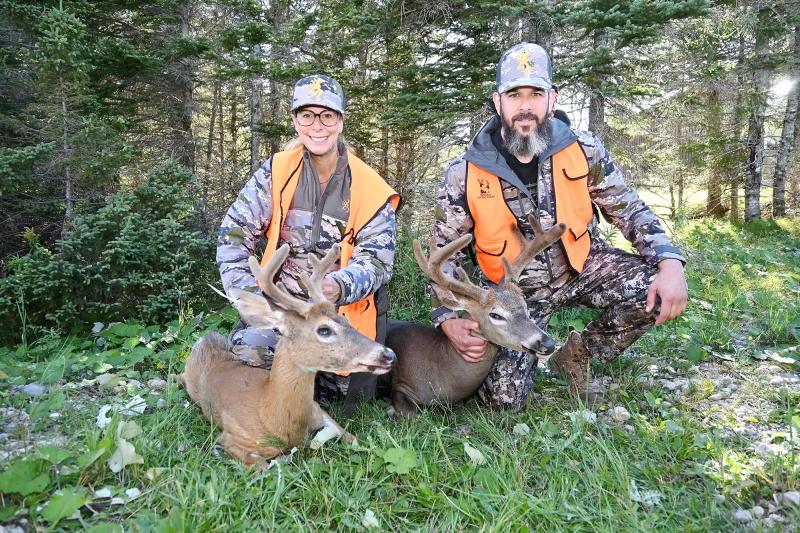 Few people realize the full potential that this piece of land 222 km long by 56 wide, located in the heart of the St. Lawrence between the straits of Honguedo and Jacques-Cartier, has to offer.

A bit of history< /strong>

In 1895, Henri Menier, a wealthy French chocolatier acquired this enchanted island with an area of ​​7943 km2. Over the next two years, he asked a trapper from Cap-Saint-Ignace to capture 220 deer and bring them to his huge estate. In 125 years, there has been a real population explosion in this environment that is ultra-friendly to the species. Some figures imply that the current population is between 80,000 and 90,000. It is therefore an extraordinary introduction that has generated a most enviable concentration. Add to the equation that there are no predators like bears, coyotes or wolves on the island and biting insects are not too invasive.

Acquired by Consolidated Bathurst in 1967, the island was bought in 1974 by the government, which in 1984 entrusted the management of a good part of the territory to the state-owned company.

Last year , a stroke of brilliance and genius, Sépaq Anticosti acquires 75% of the operations of one of its competitors, Safari Anticosti. The biggest then becomes even bigger, with a playground that now reaches 5585 of the 7943 km2, or 70.3% of the total territory.

You certainly know the expression that says that someone has big shoes to put on? Know that this is the case of the new director, Serge Larivière, and his experienced team. For all forest innkeepers, managing a single outfitter is already quite a challenge. Imagine: this trained biologist, who worked for a long time in the field for various hunting, fishing and trapping organizations dedicated to conservation and healthy exploitation, must take care of the equivalent of 17 outfitters in Europe without guide, 12 others with a guide and 6 others on the American plan with a guide and meals. Add to that 170 employees, including about 60 guides. Fortunately, Mr. Larivière has acquired a lot of experience over time as a manager by working for major stakeholders such as Ducks Unlimited and the Fédération des Trappeurs du Québec.

“My father frequented the island for more than 25 years. He even introduced me to deer hunting in Wickenden territory. I then accompanied him four times when I was a young adult. I am now realizing my dream and probably that of my father,” explains Mr. Larivière with pride and a broad smile.

When the Sépaq Anticosti managers acquired the six sectors of Safari Anticosti. They had two specific goals in mind, to democratize access to the eastern part of the island and to diversify the offer.

In addition to the Port-Menier airport, Sépaq now operates the Saumon airport, which can accommodate much larger jet aircraft, such as the Boeing 737 for example. “This trail allows us to minimize land transport on the Trans-Anticostian
and to provide quick access to a very little exploited territory”, specifies the new director.

When we ask Mr. Larivière why we should go to Anticosti to practice our favorite harvesting activity, here is a summary of the points he highlighted:

Basically, the 3300 nemrods can catch a total of two male, female or fawn deer. Each client can operate an exclusive sector ranging in size from 50 to 250 km2, with an average of around 100 to 150 km2. The extended hunting season begins in early September and continues through December. The activity can take place in a host of habitats ranging from mature forest to peat bog, seaside or riverside, woodshed, savannah, regeneration enclosure, etc. “We are far from the peri-urban world and the cornfields of India,” he jokes.

The hunting trails are laid out, numbered and mapped on Avenza Maps. Thousands of kilometers of forest roads make it possible to penetrate everywhere within the hinterland to practice all the techniques such as fine hunting, on the lookout and even approach by vehicle. You can opt for 4- to 6-day packages suitable for all budgets.

“The venison from our deer has a unique taste that is different from that of deer from the continent. It is much less pungent, because they do not consume cedar on the island,” says Mr. Larivière.

People also go to Anticosti to visit the Vauréal falls and the Patate cave, to discover the numerous fossils, to observe the diversified marine fauna and the three species of foxes, to hunt small game, to fish for trout or salmon, for vacationing and all related activities during the beautiful season.

“This jewel of the St. that is Anticosti Island is a UNESCO World Heritage Site. My team's mission is to ensure sound management, sustainable development and offer packages at competitive prices,” reassures the director.

When I asked this manager to experience how he planned to juggle all the rising costs of food, fuel, equipment, subcontractors and all the miscellaneous operating expenses, he was quick to reply, “It costs what it costs seems easy to say, however, when you realize the value of the experience and all the costs involved, Sépaq Anticosti remains a sure bet.”