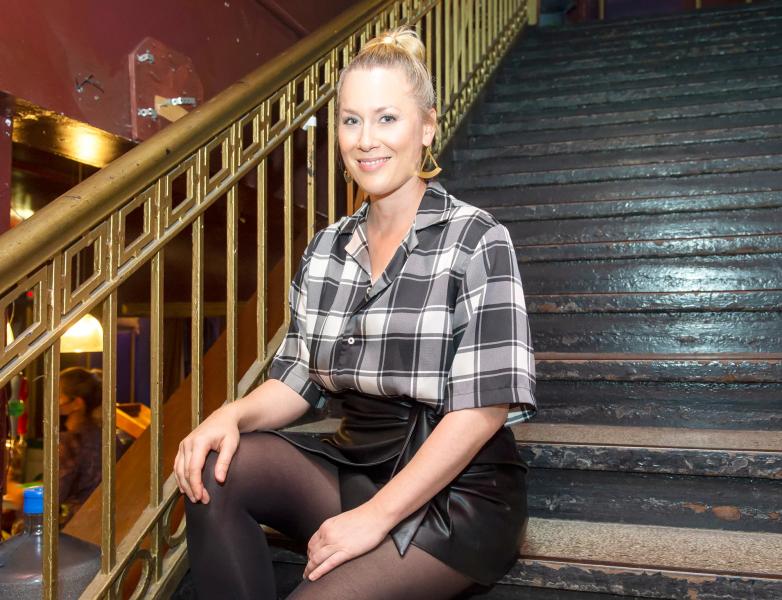 Mélissa Lavergne, the well-known percussionist from the show Belle et Bum, has just published her first novel . Entitled Iroko (this robust tropical wood used in West Africa to carve percussion), this work of fiction is inspired of certain realities related to music experienced by the traveling artist.

The Iroko is not a biography or even an autofiction, insists Mélissa Lavergne.

“It’s more of a work of empathy where I draw inspiration from emotions and lived experiences to let the story take flight. It’s a love letter to music inspired by a moment that I lived,” she says.

This moment is her first trip to Guinea where, as is the case for the character of Martine, she went to live a musical internship. It is in the love of music, the challenges that come with being a woman in the world of generally male percussionists and in the experience of travel that Mélissa and the main character of Iroko come together .

“Otherwise, Martine isn't me,” insists the music teacher at Cégep de Saint-Laurent. Let's say at most that she is my literary alter ego. »

Written in April 2020 during the pandemic, her novel uses drums and music as a background angle to address various themes: the formative journey, equality through art, the search for identity, childhood abuse, heartache, prejudice, sexism and self-imposed suffering. Courage, comfort and validation through music too.

“Martine is a young person who wants to prove herself a lot and who seeks her worth, which is denied to her in Quebec, explains the author. 39 years old for whom it was a long process to have his value recognized, especially abroad. Everything made me “the other” as is the case for Martine”.

The events experienced by this heartbroken young woman leaving for West Africa, her encounters, her friendships, as well as her childhood traumas, however, remain in the realm of romance.

If this novel takes place in Guinea, it is because it is a country where art occupies a central place in daily life. < /p>

“There is dancing, singing and live musiceverywhere in the streets, says the traveler. The music there is always stuck to rituals and rites of passage. »

It is in Africa that Martine finds the proof that she has a place in a world of men; in a place where it is appreciated at its true musical value. With this first novel, Mélissa Lavergne wanted to talk about the restorative and soothing effect of music and art in general.

The musician does not hide having experienced a media trauma in May last when, chosen to be spokesperson for the Festival Nuits d'Afrique, she had to withdraw following strong negative reactions from people on social networks.

“Even if we had agreed that I would shed light on people of diversity, I preferred to withdraw, listen to these people who carried a lot of suffering within them and even do diversity coaching in order to better understand what had happened, concludes- she. This shook me up a lot, because I have always seen myself as an ally of racialized communities. »