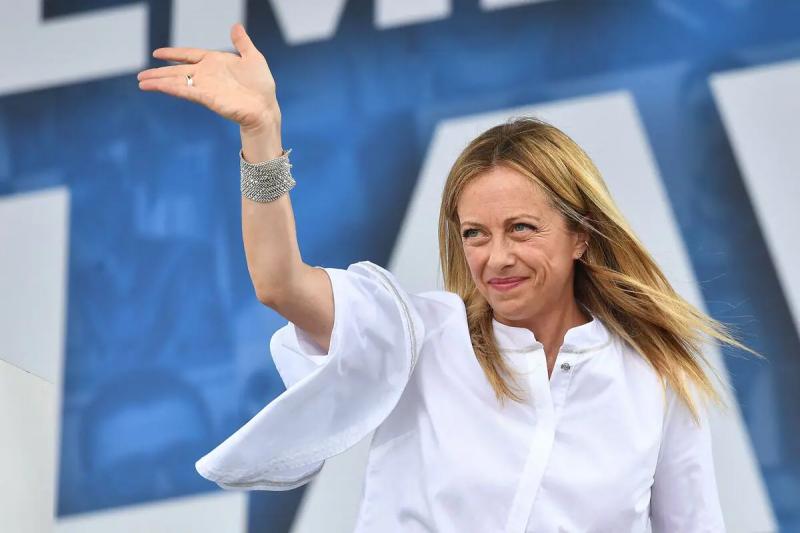 The Italian far right was hoping for a historic victory on Saturday, on the eve of crucial legislative elections that could make Giorgia Meloni the first leader of a post-fascist party to lead the government of a founding country of community Europe.

The leaders of the main political parties threw their last strength on Friday for the final electoral meetings of the campaign, political silence being imposed on all candidates from 22:00 GMT until 'when the polls close on Sunday.

In Naples (south), Giorgia Meloni, head of Fratelli d'Italia (FdI) given nearly 25% in the voting intentions, launched a thunderous: “I am a patriot!”.

< p> But it was above all his ally Matteo Salvini, head of the League (anti-immigrants), who occupied the media space by demanding “apologies or the resignation” of Ursula von der Leyen. He criticizes the President of the European Commission for having brandished the threat of sanctions in the United States on Thursday in the event of violations of the democratic principles of the European Union (EU) by Italy.

< p>Polls being banned in the two weeks preceding the election, the latest surveys credited FdI with 24 to 25% of voting intentions, ahead of the Democratic Party (PD, centre-left) between 21 and 22%. This is followed by the 5 Star Movement (ex-antisystem) with 13 to 15%, the League with 12%, FI with 8%.

The right-wing/far-right coalition could win between 45% and 55% seats in parliament.

Abstention could exceed 30% in this election, analysts say, a high figure for Italy.

Brussels is following this election closely, in particular on the sensitive issue of sanctions against Moscow and on any tensions that could arise between the Commission and an ultra-conservative and sovereigntist government.

In solidarity with NATO since the start of the Russian invasion of Ukraine under the leadership of Mario Draghi, Rome has traditionally maintained cordial relations with Moscow.

Silvio Berlusconi, the third conservative coalition partner with Forza Italia, sparked controversy when he said on Thursday evening that Vladimir Putin had been “pushed” by his people to invade Ukraine.

When he was head of government, Berlusconi befriended the Russian president, whom he received personally in his villa in Sardinia and with whom he traveled to Crimea after the annexation of this Ukrainian peninsula by Russia in 2014. Faced with the outcry caused by his last remarks, he reaffirmed on Friday his “absolute loyalty” to NATO and the EU.

Matteo Salvini, he is pushing for relief sanctions against Moscow, which he considers ineffective and counter-productive, while deeming the invasion of Ukraine “unjustifiable”.

Atlanticist, Giorgia Meloni has on the other hand taken clear positions in in favor of supporting Ukraine, sanctions against Russia and sending arms to Kyiv.

The Italian press echoed these concerns on Saturday. “Zelensky to the Italians: 'don't vote for Putin's friends'”, wrote the left-wing daily “La Repubblica” on the front page.

Relations with the EU will also be closely scrutinized, Ms. Meloni alternating promises of cooperation with veiled threats.

“We want a strong, serious and respected Italy on the international scene,” she warned. shelved its plan to get Italy out of the euro zone, but concerns persist, especially as it has just reiterated its support for the Hungarian regime led by the ultranationalist Viktor Orban.

She calls for the renegotiation of the Italian post-Covid recovery plan, financed to the tune of nearly 200 billion euros (263.6 billion Canadian dollars) by Europe, to take into account the surge in energy costs. in the wake of the war in Ukraine.

However, the disbursement of funds is linked to a series of reforms whose implementation was scrupulously respected by the outgoing government of Mario Draghi and which now seem compromised.

For Meloni, “the party is over”, Italy “is about to begin r to defend his national interests as others do”.