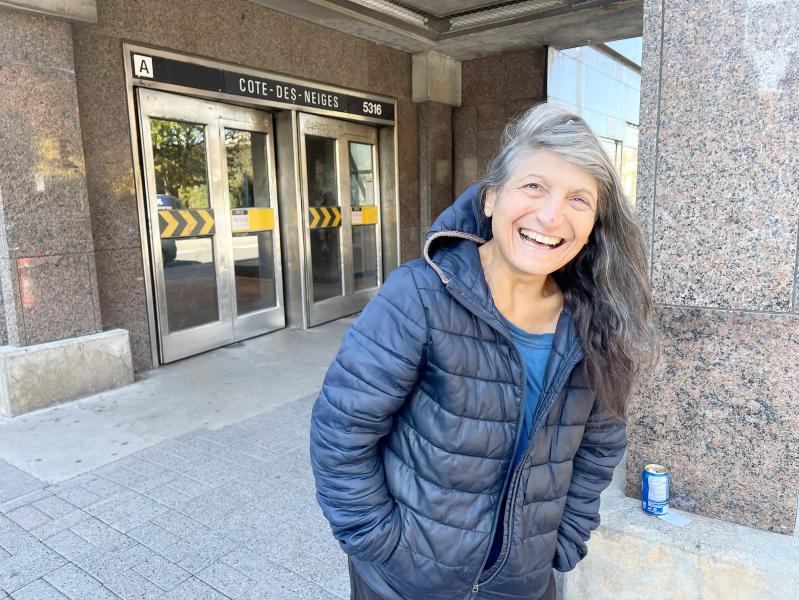 Inside Montreal, journalist Louis-Philippe Messier travels mainly on the run, his office in his backpack, on the lookout for fascinating subjects and people. He talks to everyone and is interested in all walks of life in this urban chronicle.

She's still there, in front of the metro station Côte-des-Neiges, to sing from 6 a.m. until around 1 p.m., seven days a week. Even in winter.

Some call her the jukebox woman. She knows more than 200 songs by heart with a predilection for Edith Piaf and Marjo.

In the absence of a ticket or a coin for a specific title, she sings what she wants.

When I arrived yesterday morning, she performed the song Dry your tears by Daniel Bélanger with accuracy.

“I would have liked my career as a singer to take off and that a producer noticed me, but that didn't happen, so now I sing in front of the metro”, Thalie Norac immediately confides to me, all smiles.

“I come to listen to her during my walk: she sings well and she's nice,” said a passer-by, Gilles, a retired STM bus driver.

When he realizes that I am a journalist, Gilles gives me a stern look and makes me swear that I will write “a good article” on Thalie.

During the interview , a few passers-by leave a coin for her or greet her as they pass.

“I don't really know these people, because I'm too busy singing to talk to them, but I thank them when they give me something and I recognize them,” breathes Ms. Norac.

Thalie Norac is the stage name this Ville-Émard native chose for herself in her early twenties, around 1990, to pursue a career.

“I requested and obtained from the court in 2007 that this become my real name. »

She was a waitress for a long time in Coras, Mikes and Giorgio’s, she tells me.

“I also did sung telegram for Party Productions in the 1990s.”

She studied music at nearby Vincent d'Indy School and jazz at College Lionel-Groulx.

“I also paid for singing lessons, I invested everything in that. »

In the mid-2000s, with the intention of propelling herself forward, Thalie bought herself three large road signs: one at the corner of Jean-Talon and Saint-Laurent, one on the 15 and one on the 20.

“It didn't work, it was expensive and it put me on the street,” she says.

She is keen to point out that she has a roof over her head.

During our discussion, an STM employee came to offer her a nice suitcase, but Thalie refused.

« I work hard and I want to buy my things myself with the money I earn: I don't want donations of clothes or equipment, that makes me angry.

She writes down her recipes in a notebook and if she sings as planned today, that makes her 133 days in a row.

Since May 15, as evidenced by a notebook where the singer writes down her recipes, Thalie has sung here seven days a week… 133 days in a row today.

“I am assiduous and reliable, I would like to get contracts, but life has broken and changed things… I never thought I would sing outside a capella like that. »