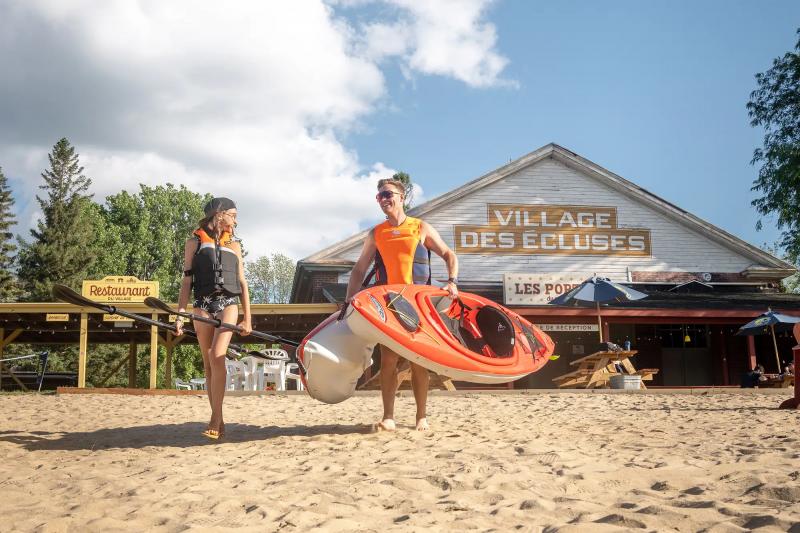 In Pointe-des-Cascades, just 40 minutes from Montreal, you will discover with astonishment the Village des écluses, a secluded place magnificently located on the shores of Lake Saint-Louis. Unusual, this former industrial site in metamorphosis is animated by a terrace, a summer theater, snowboarders and kayakers.

The site had been inactive for three years, following the closure of the Théâtre des Cascades, which opened in 1986 and where icons such as Denise Filiatrault and Robert Lepage staged there. It is now reopened.

On the left, the terrace, and further on, on the right, the summer theater.

From 1900 to the end of the 1950s, all the buildings nicknamed “the shops” were used for the maintenance and management of the Soulanges canal, located nearby and bordered by a cycle path. The premises were gradually abandoned with the opening of the St. Lawrence Seaway.

The café- bistro and terrace. Near the ceiling, you can clearly see the rails of the hoist which was used to lift the heavy loads.

The theater has taken up residence in the former timber warehouse. Right next to it, the electrical substation identified as a shop was used to distribute electricity for the lock gates, streetlights and telephone lines.

As for the building identified as a hotel, it is in fact of an old tool warehouse. It was never a hotel for real, but rather for the filming of the film Taxman in 1999, part of the repertoire of Quebec feature films Éléphant, by Quebecor.

Near a small beach, the terrace, frequented by people of all ages and families, is eye-catching. In its mobile kiosk, PopsFamille offers an original variety of homemade popsicles. I really liked the strawberry lollipop immersed in a lemonade with bursting strawberry scoops.

The small relaxation beach (unsupervised), on the shores of Lake Saint-Louis.

At the bar, local drinks are served, such as cask beers from Le Castor microbrewery. There was also a very good corked cider from the Time Capsule cider house. And then, surprise, there was an orange wine! Its name: OSE du Vignoble de Pomone, a blend of grape varieties including Frontenac gris.

At the end of the day, two very different shows take place almost at the same time: the sunset and the theatre. I had a glimpse of the blushing sun descending on Lake Saint-Louis, just before the play with large puppets, somewhat inspired by Pointe-des-Cascades in the days of prohibition.

In Saint -Sauveur-des-Monts, this vast seven-acre private garden is open to the public on Saturdays and Wednesdays. Embellished with sculptures and the bridge of love, the estate is bordered by the Rivière à Simon. Trails: 2.5 km.

Plays at height in Bromont< /strong>

Designed for active families, Divertigo is distinguished by its structure of 40 challenge games with zip lines, climbing wall and free fall simulator. Floor games have been added for ages three to six.