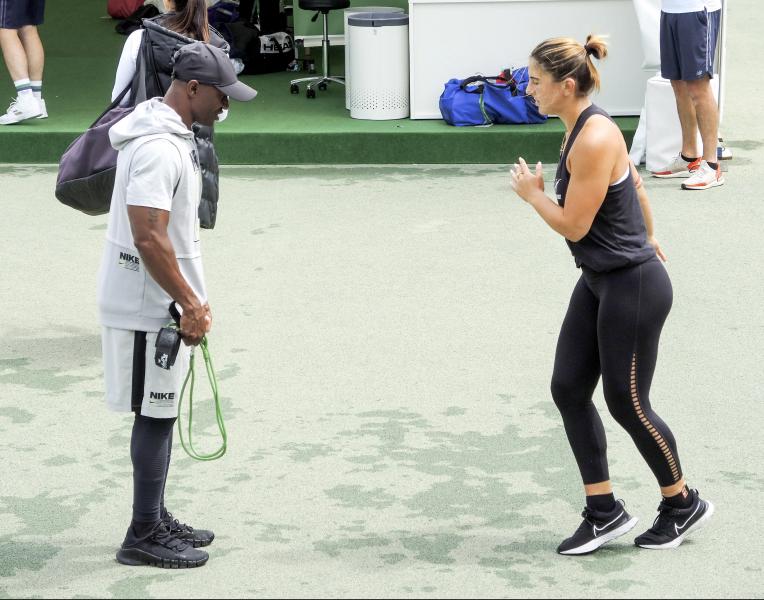 LONDON | Bianca Andreescu believes she is in the best physical shape of her life. For the first time in a long time, she is not bothered by an injury when she takes to the field.

She owes her excellent condition to her physical trainer Abdul Sillah. The latter is recognized for having worked with several renowned players such as Serena Williams, Naomi Osaka and Sloane Stephens.

Andreescu's team contacted him last year to obtain his services.

“I decided to accept his proposal because I like athletes who are neglected in their sport,” Sillah said Wednesday. I often have a different view that athletes have of themselves.

“I like to be able to take them to the highest level. It's fun to see them take the steps to the promised land. »

Often on the sidelines

With Andreescu, he knew very well what he was getting into.

« My main concern was to understand why she was injured so often, Sillah said. I also did a psychological evaluation to find out where she was. It allowed me to determine my approach and the way I was going to communicate with her.

“At this level, you can't teach them anything new. The biggest challenge is motivating them to perform to the best of their abilities. If an athlete improves by 1%, he will do so mainly mentally.

Before returning to the game last April, Andreescu completed an eight-week camp with Sillah. The American forced the Canadian to push her limits.

“Abdul is tough on me, but in the right way,” Andreescu said. I cried three times after a session. It was not pleasant, but at the same time, it was very satisfying.

“It is the type of moment that makes you stronger. It's worth it.

It has been tested several times, but it has met Sillah's requirements well. In particular, she did early morning training.

“My job is to force her to ask questions about her career,” said the physical trainer. If that's what you want, here's what it takes. If not, this career is not for you.

“When she makes the decision to put in the effort, everything becomes easier. It's a matter of discipline. If you don't have that, you can't achieve anything.

“You don't do it for me, but to achieve your goals. It is a contract that you signed with yourself several years ago. »

The 2019 US Open champion's body is transformed. It’s visible to the naked eye.

“Every athlete is a performance machine. You have to know what weight class it belongs to in order for it to be at the top of its game. I don't believe in weight loss. Rather, you had to refine your body and focus on the fat level. »

Andreescu has also changed his eating habits. In particular, she dropped foods high in sodium.

Thanks to the Williams

Sillah built his notoriety thanks to his first client: Serena Williams.

“I started working with her at Stanford University, he said. Then there was a snowball effect. She was my first tennis player.

“I learned a lot from contact with her father Richard who became my mentor. Many of the things I teach today come from him.

“He taught me to teach by being positive, no matter what. »

Sillah managed to bring Williams and Naomi Osaka to the top. Will he pull off the same feat with Andreescu?

It's in the hands of the player.

I had a career first on Tuesday. I had to monitor and analyze three encounters at the same time. Félix Auger-Aliassime, Bianca Andreescu and Denis Shapovalov played their first round matches on different grounds. With the cooperation of my colleagues, I was able to have three different screens to watch the Canadiens in action. A different kind of sport.

The shuttle drivers (photo) of Wimbledon are all friendly. One of these told me about driving in London while a heavy vehicle was heading straight ahead: “Here in England, it is 50% faith and 50% luck when we drive! ” He's not wrong. London drivers are masters of the slalom between cars.

When we do our daily press review of the London media to Wimbledon, we see one thing: the pressure exerted on soccer players has nothing to do with that put on the players of the Canadian. The gestures of the big stars are scrutinized. A star who is photographed with a bag from another formation becomes an instant headline.