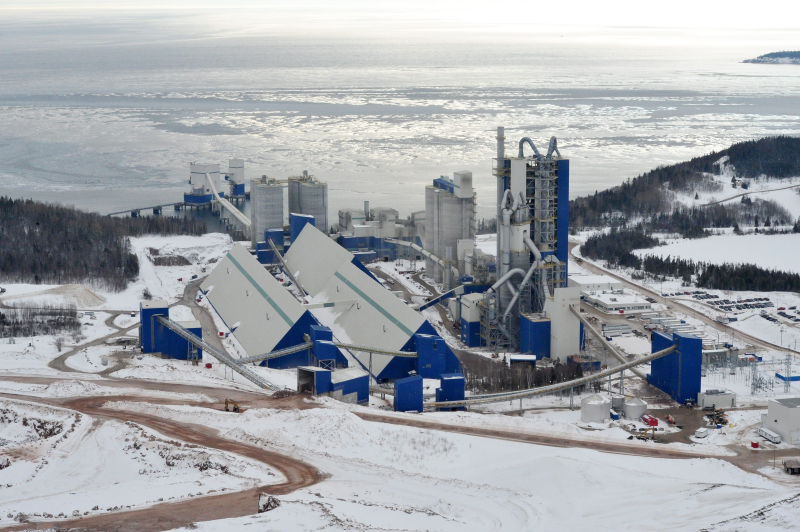 The McInnis cement plant released even more greenhouse gases in 2021, to the point where it is now far ahead of the others at the top of Quebec's biggest polluters.

In 2021, the Port-Daniel cement plant in Gaspésie emitted more than 1.4 million tonnes of greenhouse gases (GHGs), our Bureau of Investigation learned.

Au Over the past decade, no plant has released so many GHGs in one year, according to the register of establishments subject to the carbon market of the Ministry of the Environment.

The cement plant thus exceeds by more than 200,000 tonnes of GHGs the second biggest polluter, the Jean-Gaulin de Valero refinery in Lévis.

The cement plant, operated since the end of 2021 by Ciment St-Marys, a subsidiary of Brazilian giant Votorantim Cimentos, had become the biggest polluter in 2020.

Former company spokeswoman Florence Gauthier said yet in 2014 it was wrong to say that the cement plant would become the biggest polluter. The future proved him wrong.

Inaugurated in 2017, the cement plant has still not reached its full yield and as it increases its production, it will emit even more GHGs.

Meanwhile, the production of the Jean-Gaulin refinery slowed down in 2020 due to the pandemic and various works. In 2021, its GHG emissions started to increase again.

Since 2019, the McInnis cement plant has increased its emissions by approximately 200,000 tons every year. It is thus getting closer and closer to the “worst case scenario” of 1.76 million tonnes of GHGs per year.

These data mentioned by the former CEO Christian Gagnon should only be “hypotheses which will never materialize in reality”, he assured in an open letter in 2014.

Christopher Masonthe spokesperson of Votorantim in North America, explains today that “the plant projects GHG emissions of 1.6 million tonnes of CO2 per year, when operating at full capacity.

He cites, for example, low-carbon fuels, the “active study” of emerging technologies for carbon capture or the production of low-carbon cement (eg Portland-Limestone cement).

To seek a certain social acceptability of this controversial project, because it is very polluting, the former administration had promised to use in the very near future forest residues (biomass) as fuel to replace up to 50% petroleum coke.

Asked by the Journal whether the forest biomass project was still on the cards, Mr Mason explains that the search for “low carbon fuels remains a priority for all the factories of St Marys” and simply says “ different options” are being studied.

“It is important to note that once submitted, the authorization process can take several years”, he specifies.

Just last year, the cement plant thought it could be running at full speed in 2023. Mr. Mason specifies that the new administration plans this for 2027 instead.

This change would not be related to the many problems of the plant for two years, assures the spokesperson.

Quebec's biggest polluter has indeed been under an order from the Ministry of the Environment since September to force it to stop working. emit sticky dust and other contaminants that do not meet standards.

In 2020 and 2021, there were at least 10 equipment failures that resulted in the release of dust or contaminants. At least 80 reports and 11 complaints were made for air quality. The plant received five notices of non-compliance, and the ministry has been investigating since.

The Journal also revealed this summer that the cement plant, under the former administration, had tried to hide from the ministry of the Environment the fact that it was spitting dust on the residences of its neighbours.

Mr. Mason explains that the change in date to reach full capacity is based on various factors such as production, distribution and the current state of the market, but also the potential impacts of environmental improvements on their operations.

< p>“Since taking over management of the plant, we have focused on safe and sustainable operations by delivering a high quality product and optimizing plant performance, while managing ongoing initiatives to improve environmental performance,” he adds.

COMPANIES THAT HAVE EMITTED THE MOST TONNES OF GHG

Source: Ministry of the Environment

We s' away from the objective

After falling in 2020 thanks to the pandemic, GHG emissions from Quebec's biggest polluters started to rise again in 2021.

The roughly 125 factories subject to the carbon market, which are the most polluting in the province, emit even more GHGs than before the pandemic.

Emissions from these major polluters represent the lion's share of all GHGs emitted by the industrial sector.< /p>

According to Pierre-Olivier Pineau, professor at HEC Montréal and holder of the energy sector management chair, this increase proves that the carbon market's emissions cap is too high and does not have the expected effect. .

Each year, this cap decreases to force, in theory, polluters to reduce their GHGs.

Benoit Charette
Minister of the Environment

“It's as if we were building a house for tall people, but in fact it was inhabited by dwarfs [so it is] unlikely that the ceiling is a constraint”, illustrates Mr. Pineau.

Meanwhile, the Ministers of the Environment Benoit Charette and Pierre Fitzgibbon went to COP 27 on the climate in Egypt in recent days to praise Quebec's assets in environmental matters, “highlight our expertise” and “continue to make Quebec a leader in the green transition”, according to what they wrote on their respective Twitter account.

But the province is unable to reduce its GHGs. The latest GHG inventory, which also includes those produced by transport in particular, dates back to 2019 and even marks an increase compared to 2018.

The one for 2020 should be published in December but risks being affected by the containment and production shutdowns of the pandemic.

This lag of approximately 2 years between the publication of the inventory is moreover criticized by several experts.