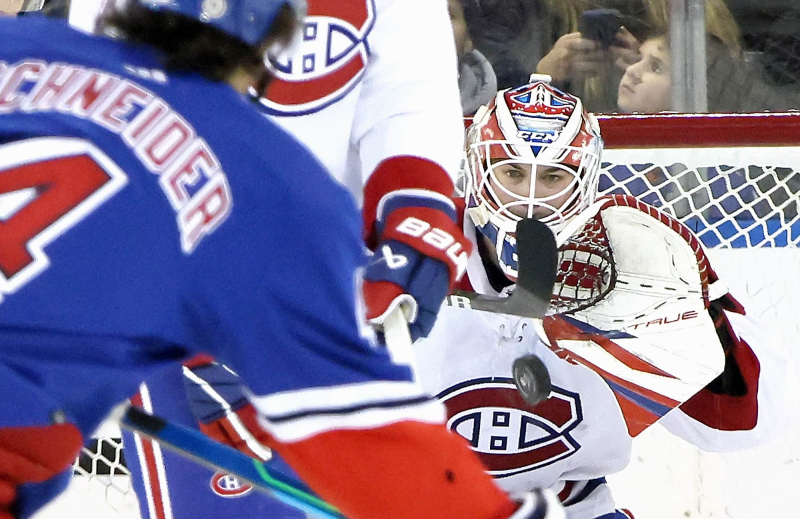 A week ago, we felt a wave of panic after the Canadiens lost 4-0 against the Kraken (an 8th in nine games), but to the credit of the players and the coach, Martin St-Louis, the bleeding has been stopped.

Things were getting worrying and St-Louis was visibly irritated by the underperformance of his players. Losing is one thing, but the way to lose is another and it had become unacceptable.

For the first time since his arrival in Montreal, St-Louis was the subject of criticism and we even found him a little too positive in the circumstances. Without going overboard, St-Louis showed that he had reached his tolerance limit and the players got the message.

The Habs have won two in their last three games, and even in the 2-1 loss at Long Island, the team was competitive.

With a team like St. Louis, amputated by a few more injuries, success must inevitably go through the goalkeeper. We must recognize that in the absence of Jake Allen, Samuel Montembeault had four consecutive quality starts without which it would perhaps be a total rout today.

As a number one

We saw that at the start of the season last year and it was an endless spiral. Fortunately, the players bonded last week, but above all, Montembeault reacted like a real number one and it is to his credit. When things are going badly, it becomes discouraging when the keeper doesn't make the big saves.

A fragile team needs a keeper who can fix mistakes and give them a chance to win. Montembeault's work was very important, and without saying that the team is saved, I believe that it has taken a very important step in its development.

There will always be difficult times for any team and, in the short term at least, we have found solutions to turn things around. This is a lesson that will serve in the future.

Without wishing misfortune on anyone, wounds take away sometimes a thorn in the side of the trainer. The case of Montembeault is a good example. He would have deserved back-to-back starts earlier in the season, but St. Louis always came back with veteran Allen.

We can draw a parallel with the case of Brendan Gallagher. Without denigrating him, his absence allows St-Louis to give more ice to young people who deserve it without creating discomfort. Sometimes, the coach feels obliged to play his veterans.

Another example. Injuries to Joel Edmundson and Michael Matheson early in the season forced St. Louis to use their young defensemen more than expected and the effect was positive.

In a season like this, I believe that it is a good thing to give more responsibility to young people who deserve it. We sometimes have nice surprises.

I said last week that it was a great opportunity to be selfish and Montembeault not only helped the team, but he s done a favor. He has shown in St-Louis that he can play more, and at the same time, he closes the door to Cayden Primeau.

My mentality has always been not to give another goalkeeper a chance to take over my position and that's what Montembeault achieved last week. Imagine if he had screwed up and Primeau had played the hero. Suddenly, we would have found ourselves with a controversy in net and a source of distraction.

Montembeault closed the door in every sense of the word and he won a lot of points. It's up to him to continue.

With two excellent performances in 24 hours, Samuel Montembeault demonstrated how this obsession of coaches with absolutely wanting to use two goalkeepers in two days is not justified, especially when there is no of travel after the first game.

I love P.K. Subban,but I have the impression that we wanted to reward the public as much as to honor them with their tribute evening. I wonder why we did such an evening for P.K. the day after his retirement, when we haven't done it yet for Andrei Markov who played 15 years in Montreal. I might add Chris Chelios and a few other former Canadians to the “forgotten” list. I like flamboyant personalities like P.K., but I wonder what we're waiting for to mark Markov's career.

The Canadiens and Toronto Maple Leafs know how to do it big for tribute nights, but that's not always the case in smaller markets. I thought the Mike Bossy party was pretty low key on Long Island, given his stellar career. It was sincere and warm, but nothing more.

The passing of Gino Odjick saddens me greatly. I played one season with him in 2001-2002 and he was my locker room neighbour. I loved it. What a nice guy! He liked to smoke his little cigarette with Michel Therrien and he laughed out loud in my face when I told him he had ashtray breath. Pierre Gervais had offered to change him and I said no. My deepest sympathy to the family.